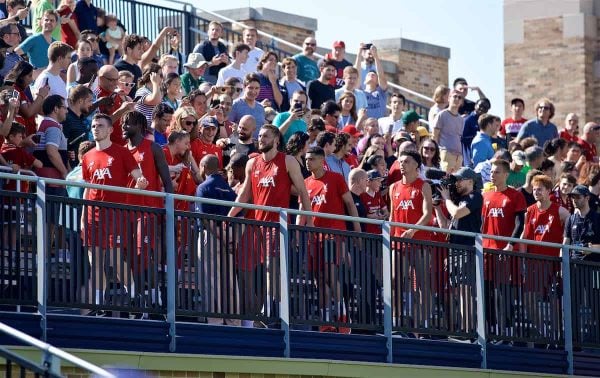 Here’s how to watch Liverpool vs. Borussia Dortmund in the first game of the US tour (1.05am BST, 8.05pm EDT), live online and on TV around the world.

The Reds have arrived in the United States with their first stop being South Bend, Indiana, and begin their three-game tour with a clash against Jurgen Klopp‘s old club.

Dortmund are preparing for another title challenge in the Bundesliga, after finishing just two points short of champions Bayern Munich last time out, and have bolstered their squad significantly.

In come Thorgan Hazard, Julian Brandt, Nico Schulz and one of Klopp’s proteges, Mats Hummels, who returns from Bayern after three years away; Abdou Diallo, however, has departed for Paris.

Meanwhile, Liverpool are largely unchanged, and this game could see a host of key players come in, with Virgil van Dijk, Trent Alexander-Arnold, Andy Robertson, Jordan Henderson and Gini Wijnaldum all prime to feature.

The Notre Dame Stadium is unlikely to showcase anything close to the finished product for either side, but it promises to be an entertaining friendly which could hint at what’s to come.

Liverpool vs. Borussia Dortmund is live on LFCTV, with coverage starting at 12.05am (BST). LFCTV is available on channel 434 on Sky and channel 544 on Virgin Media.

Liverpool vs. Borussia Dortmund is being shown live on TNT in the US, which is available to live stream with FuboTV.

LFCTV GO are streaming Liverpool vs. Borussia Dortmund live worldwide, with coverage starting at 12.05am (BST).

Supporters can find the Reds’ first friendly of the US tour on the following channels worldwide: