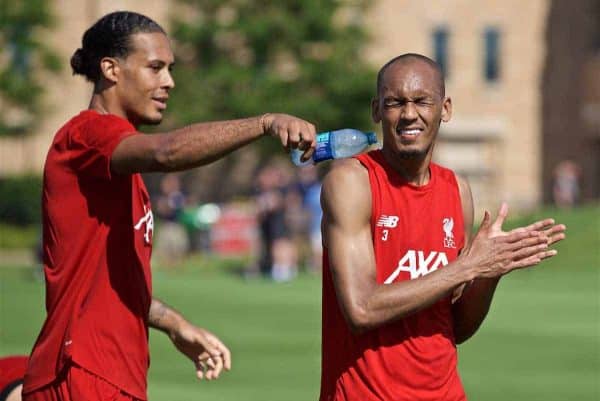 Liverpool finish pre-season with a friendly against Lyon in Geneva tonight (6pm BST, 7pm CEST). Here’s how to watch live online and on TV around the world.

The Reds are rounding off their preparations with a training camp in Evian, but have made the short trip across to Switzerland for a final warmup game.

So far this summer, meetings with high-profile opponents haven’t fared well, with defeats to Dortmund and Sevilla followed by a draw with Sporting CP on an eventful tour of the United States.

But with Alisson, Naby Keita, Xherdan Shaqiri, Mohamed Salah and Roberto Firmino all returning, the hope is Liverpool are better served as they gear up for the Community Shield on Sunday.

It won’t be the finished product, but Jurgen Klopp‘s side can now edge closer to their setup for 2019/20.

Liverpool vs. Lyon is live on LFCTV, with coverage starting at 5.15pm (BST). LFCTV is available on channel 434 on Sky and channel 544 on Virgin Media.

Liverpool vs. Lyon is being broadcast live by B/R Live in US, kicking off at 1pm EDT and 10am PDT.

Supporters can find the Reds’ final friendly of pre-season on the following channels worldwide: