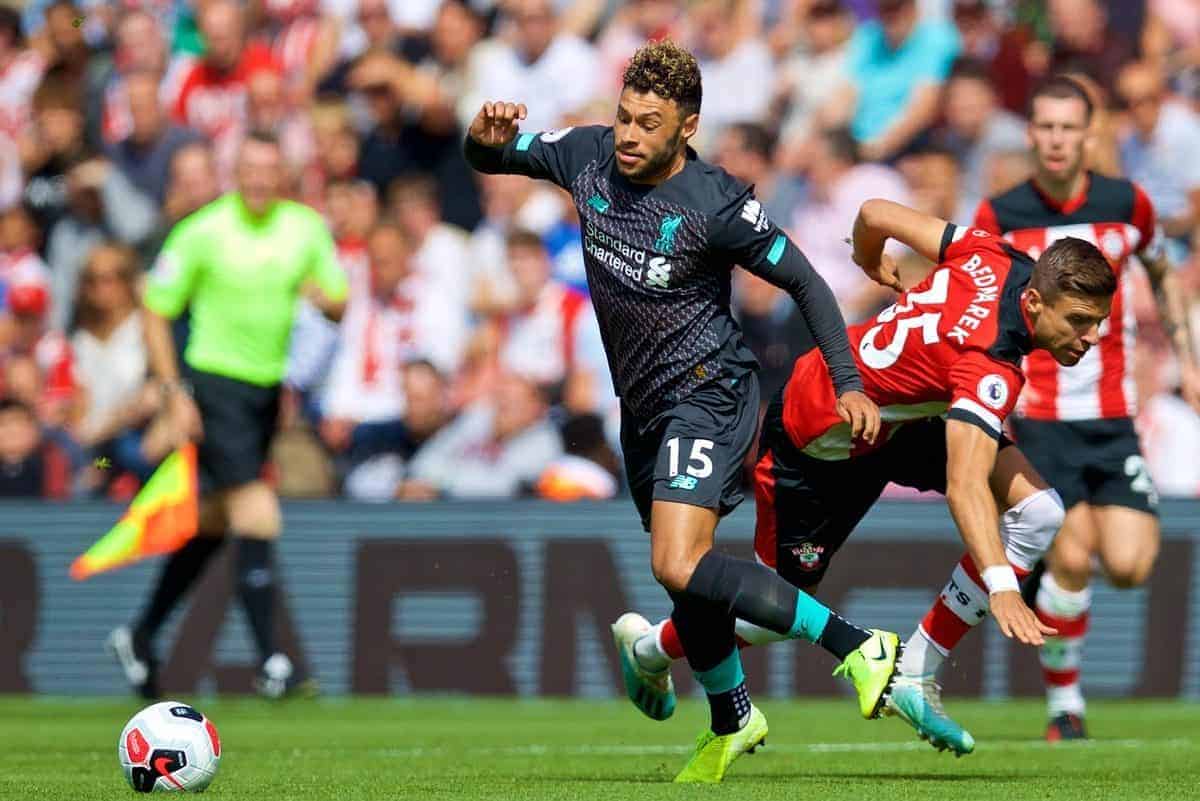 Alex Oxlade-Chamberlain started in his favoured midfield role for the first time in 16 months on Saturday, and his performance suggested he can return to his best.

When Oxlade-Chamberlain left Arsenal for Liverpool in 2017, he did so with a view to establishing himself as a central midfielder.

“I’ve always wanted to be Steven Gerrard, so I’ve still got a hope of that,” he famously said after the FA Cup final, two months before swapping the Emirates for Anfield.

His versatility saw him fielded out wide on his returning to the starting lineup in the Reds’ UEFA Super Cup victory over Chelsea in midweek, but Jurgen Klopp was the first to admit it was a mistake.

“We want to give him the opportunity to perform, to shine if you want, and in those circumstances, on the position, it obviously was not as possible as we would have wished,” the manager said, having withdrawn the 26-year-old at half-time.

“But that’s then my mistake, not his mistake, because I made the decision.”

The physical toll of 120 minutes in intense heat in Istanbul, and a trip to St Mary’s coming just three days later, saw Klopp retain Oxlade-Chamberlain in his XI however.

Unlike that night on the left, though, his chance came in the role that saw him make such a big impression prior to the ACL injury that ruled him out for a year.

And unlike that night, he was able to showcase glimpses of the vibrancy, fluidity and cutting edge that make him such a unique option for the Reds in the middle of the park.

Such was the way Liverpool set up on Saturday, with Mohamed Salah, Sadio Mane and Roberto Firmino all starting in attack for the first time this season, in possession Oxlade-Chamberlain effectively served as a No. 10 in a 4-2-3-1.

Off the ball, he grew into the game in terms of pressing and tracking back, with the dynamic of Klopp’s system requiring he serve as right-back at times when Trent Alexander-Arnold found himself further forward.

In many ways, this is the all-encompassing Gerrard role that the England international envisaged, and his output at St Mary’s highlighted why he is so eager to remain there.

The potential for Oxlade-Chamberlain to dovetail with a deep-dropping Firmino and supply passes for the onrushing Mane and Salah is a dangerous one.

In fact, the best moment from his largely anonymous 45-minute showing in the Super Cup was a brilliant outside-of-the-boot pass to set up a chance for Salah—coming, predictably, from a central position.

He replicated that with a perfectly weighted ball from inside his own half, over the defence, for Salah to blast at goal with his left in the victory over Southampton.

It was the best of the chances Liverpool enjoyed prior to Mane’s opener, though after the Reds went in 1-0 up at the break Oxlade-Chamberlain and the rest of his team-mates were able to go up the gears in the second half.

This found him able to drive at the Saints’ defence and either open fire or thread passes more effectively, and speaking after the game the midfielder said he felt he “settled into [the rhythm] a bit better” in the second 45.

He was Liverpool’s most clinical passer (89.5% accuracy), only James Milner had more touches of the ball out of any of the starting midfield and attack (70 to 55) and only Firmino broke through the lines with more dribbles (three to two).

It wasn’t the pinnacle, by any means, with Oxlade-Chamberlain himself describing it as “an alright game” for him, but there is cause to believe the spark is reigniting.

In his post-match press conference, Klopp described his performance as “brilliant,” and gave an indication that his spell on the flanks—both in pre-season and on his first start back—was part of a long-term rehabilitation.

“It was different, it was outstandingly good,” he told reporters.

“[The] 45 minutes on Wednesday, we can now say they helped for sure as well. To get the minutes, to feel the intensity and know you are ready for the intensity.

“We changed there [with Fabinho and Jordan Henderson], so it was just good to have these opportunities and Ox was obviously not bad today.”

Brought off with two minutes left of normal time, Oxlade-Chamberlain is yet to complete a full competitive game for the Reds since that huge setback against AS Roma.

This underlines the long road ahead as he looks to recapture the form that made him undroppable in his first campaign on Merseyside, and why Klopp is working sensitively to steel him for the rigours of that central duty.

But he offers something to Liverpool arguably only Naby Keita could otherwise, and the Guinean’s own struggles have left a void to fill.

For Klopp, a determination to nurture Oxlade-Chamberlain’s return to key-cog status will stem not only in his quality on the field, but his character off it.

That was clear as the ex-Southampton youth—who was born in Portsmouth, the manager needed reminding—made his way over to the travelling Kop at full-time to give his shirt to a young supporter.

It was fitting that this landmark afternoon came at the ground that he first made his name, and now Oxlade-Chamberlain can aim to make further steps as he looks to make that midfield role his own once again.