Liverpool cruised to a comfortable win against newly-promoted Norwich on the opening night of the new Premier League season at Anfield, but Alisson‘s injury cast a shadow. 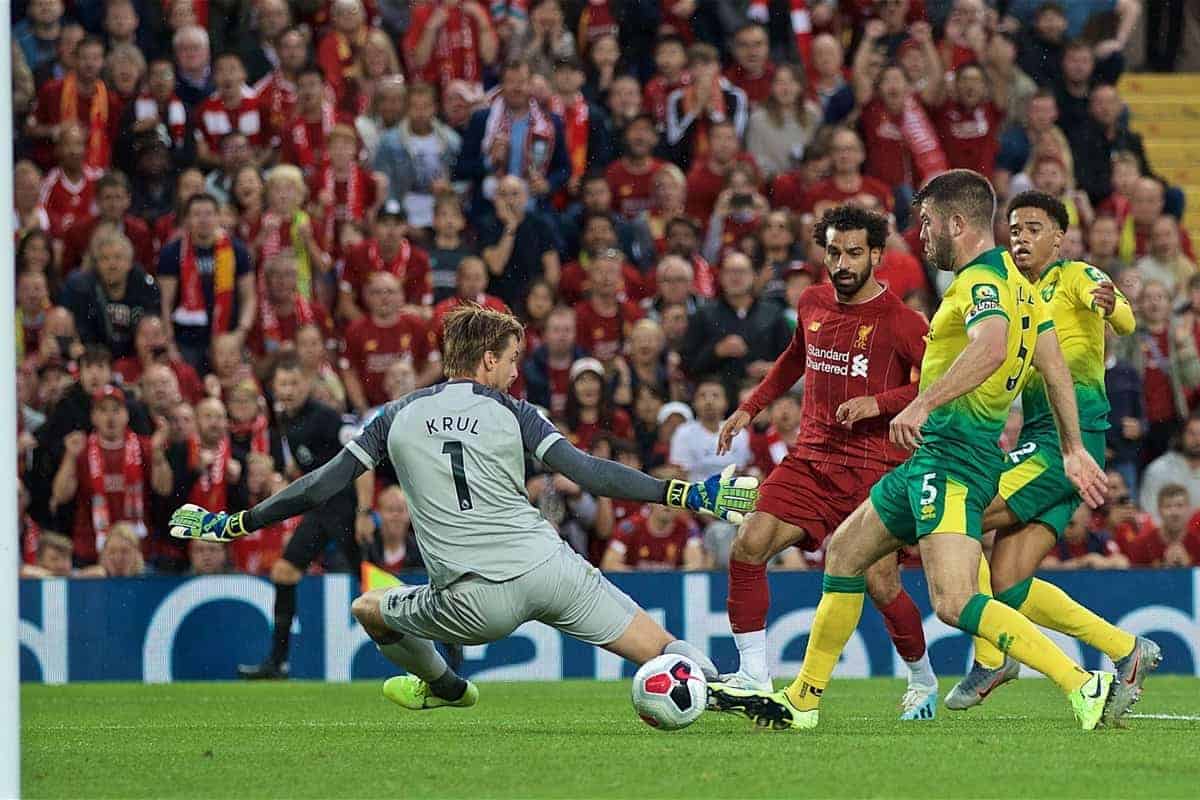 Any fears of Liverpool not hitting the ground running, in an offensive sense at least, were quelled within minutes at Anfield.

The Reds were on the front foot immediately, with lots of nice exchanges of passes around the edge of the box and plenty of movement in the channels—and lots of Divock Origi step-overs.

He set up the first, an own goal, before the other two forwards combined as Bobby Firmino assisted Mo Salah.

Four goals by the break, a brilliant chest-and-volley saved, two more efforts off the woodwork in about 10 seconds after the break… Liverpool were relentless, clinical and brilliant.

Norwich shouldn’t be too disheartened at being dissected in this way, given they won’t play another team like Liverpool, but they certainly couldn’t live with us either.

The attack was a collective effort, but an individual appreciation nonetheless for Firmino, who was utterly brilliant.

Who said we didn’t make any signings?!

It wouldn’t be the way we wanted it to happen, but Anfield got an early glimpse of the new boy after a first-half injury for Alisson.

The Brazilian had made one good double intervention and one poor pass out in the early stages but seemed to be clutching his calf when he went down after kicking clear.

Speaking post-match, Jurgen Klopp said the injury had put a shadow on the game and that it was “more than a strain” – meaning a prolonged spell on the sidelines for the Reds’ No.1

Adrian was beaten by a thunderous shot which struck his crossbar, then by a low shot from Pukki which found the bottom corner—so no clean sheet on his debut.

His reception from the Kop was, naturally, a welcoming one, but he didn’t have too many key moments. A couple of saves will have done his confidence.

It’s a shame he didn’t arrive earlier in the summer to have had time to build match fitness and get to know his new teammates.

Defence Not Quite at Full Capacity?

The goal Norwich scored was a typical example of one of the few ails of Jurgen Klopp‘s in the past few weeks, with the defence still a little troubled.

Several times the clever runs from Pukki caught the centre-backs flat-footed, while breaks down the wing saw Trent Alexander-Arnold beaten too often, as was the case in the Community Shield first half.

The perfect line isn’t quite there yet, with one behind the other three at times, and the midfield not quite protecting the back four the way they should be.

Alisson‘s aforementioned pass out gifted Norwich one chance early on and two others were skied, while Pukki’s actual goal came from Andy Robertson being slow to push up.

Still work to be done in this area and Joel Matip, in particular, might feel hard done by in being omitted from the first league lineup of the season.

Given the Reds had effectively won the game by half-time, this was surely an opportunity for the boss to rotate a few names, ensure the second row of starters topped up their fitness and pressed their own claim for future inclusion.

Naby Keita, Alex Oxlade-Chamberlain, Xherdan Shaqiri and James Milner all sat watching a somewhat sluggish second-half display, and each could offer a reasonable argument as to why they would have helped up the tempo and keep the Reds surging forward.

Klopp was, perhaps, wanting to build up 90-minute capabilities for the starters, though, so we might be expecting to see similar starting XIs in the coming fixtures.

As it was, Sadio Mane made his return as the first outfield Liverpool sub, just a few short weeks after his previous campaign ended, with then Milner getting only five minutes.

Last year it was a bit of an issue turning to players who hadn’t played for several weeks in a row, so perhaps some early involvement in the coming weeks for the fringe players might also be worth considering.

Fortress Anfield remains intact, another win to mark the new season and a marker put down: top of the league already, now to stay there for 37 more games!

The second 45 was admittedly slower, less attack-minded and certainly not as free-flowing, but the Reds didn’t need to win the title in this game alone—it was job done, and a bit of a stroll to celebrate the three points.

Next up it’s Chelsea, the UEFA Super Cup, and the chance of a trophy—picking this one up would be a very nice start to the season.

The proper football is back and Liverpool are back!