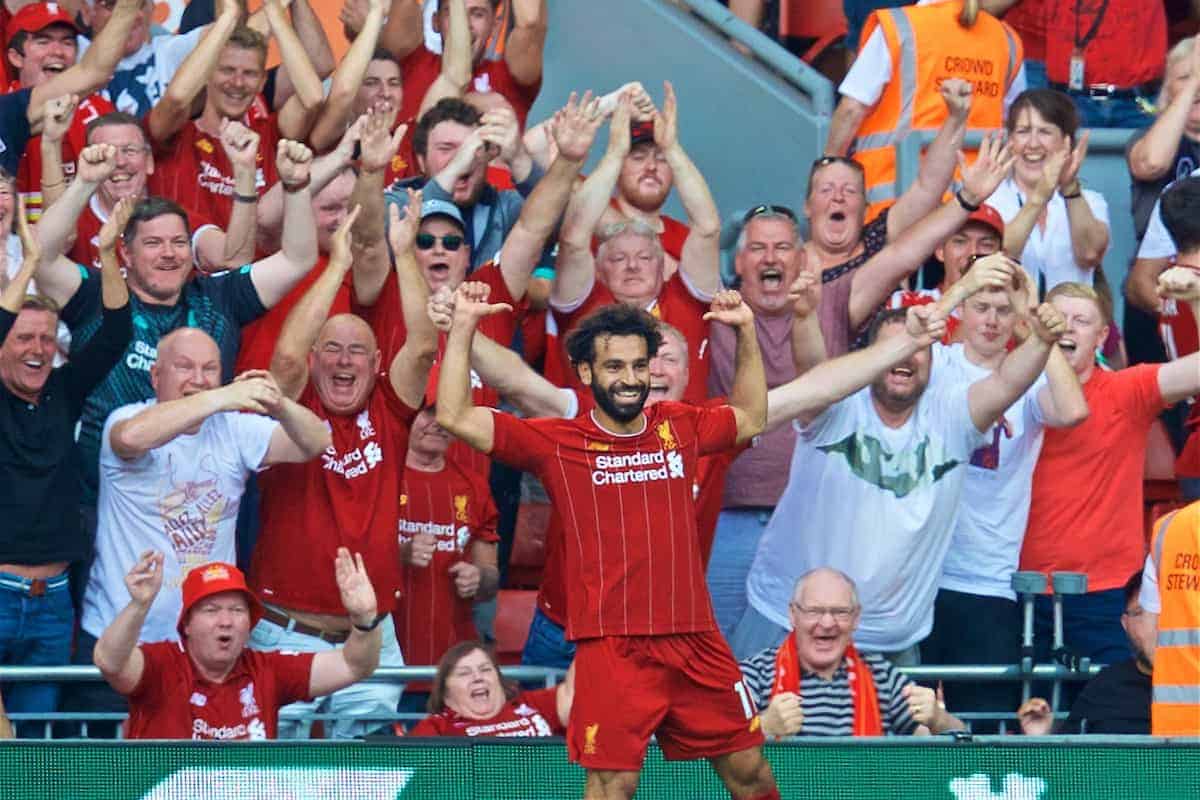 Mohamed Salah was in fine form as an on-fire Liverpool blitzed Arsenal at Anfield, with a late goal conceded the only negative in a brilliant 3-1 victory.

The Reds, lining up against Arsenal‘s diamond setup, pressed high and hard early on, and their slick passing play almost led to a goal within 90 seconds, but Roberto Firmino was unable to slide home Andy Robertson‘s low cross.

After a worrying first league start against Southampton, Adrian seemed intent to one-up his St Mary’s error as he rushed out to interrupt Virgil van Dijk shepherding the ball out of danger, almost gifting Pierre-Emerick Aubameyang a goal in the process.

Another mistake from a summer signing, this time Arsenal‘s Dani Ceballos, gave Liverpool a great chance through Sadio Mane, but the No. 10’s strike was saved comfortably by Bernd Leno.

A ridiculous and ultimately fruitless wait for the VAR team to check for a possible red card at one end then led to Nicolas Pepe breaking at the other, with the Ivorian’s effort straight into the legs of Adrian from close range.

As with the under-18s earlier in the day, the Reds’ best opportunities came from crosses, and the opener eventually saw Joel Matip‘s towering header beat Leno from a Trent Alexander-Arnold corner.

Liverpool picked up where they left off after the break, and soon they were 2-0 up as David Luiz stupidly pulled Salah’s shirt back in the box, with the Egyptian King on hand to blast home the penalty.

He extended the lead further before the hour mark, and it was a moment of pure brilliance as he turned a hapless Luiz on the right-hand side before surging inside and placing it beyond Leno and into the far corner.

The Reds smelled blood, but Klopp opted to change things around with 20 minutes left to play in order to rest tiring legs, ahead of another crucial week at Melwood.

James Milner replaced Gini Wijnaldum and Alex Oxlade-Chamberlain took over from Mane, and after taking their foot off the gas the hosts led their clean sheet slip, with Aubameyang dancing into the box and laying it on for Lucas Torreira to fire in.

It proved only to be a consolation, as Liverpool maintained their 100 percent record to stay top of the Premier League after three games.