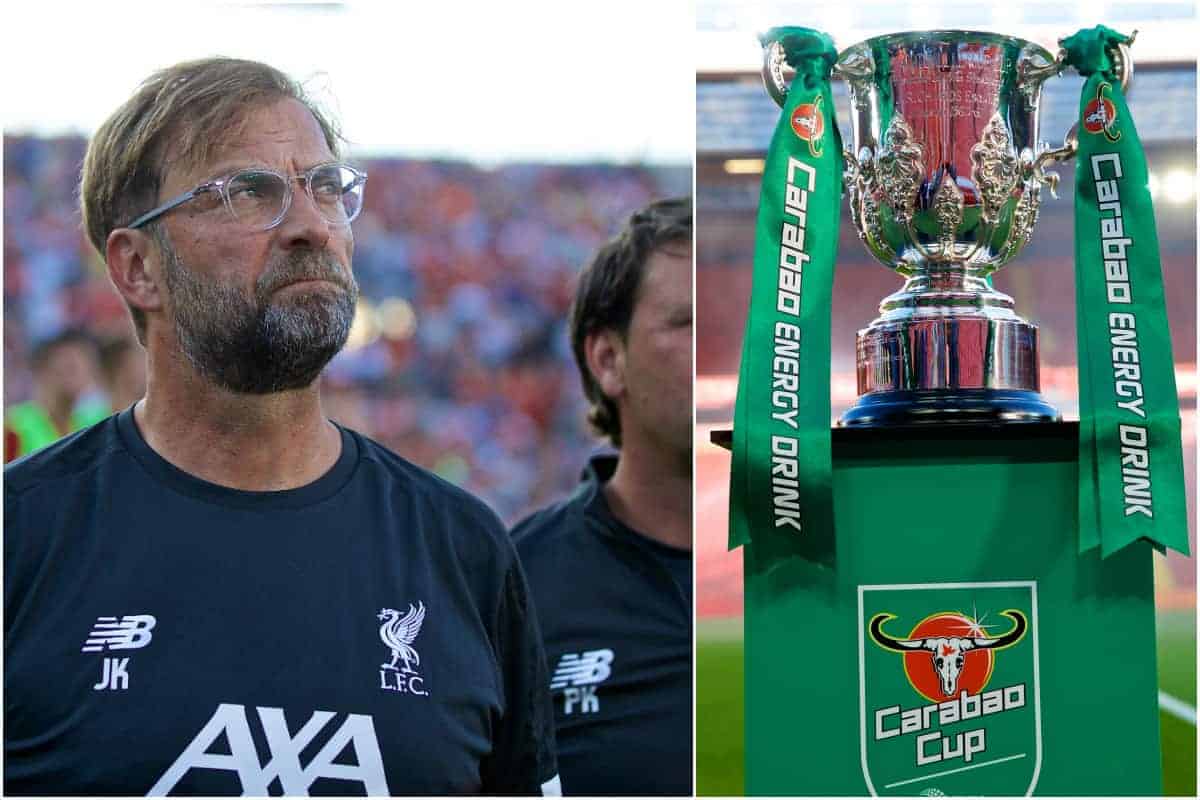 Liverpool will enter the League Cup at the third-round stage again this season, and will learn their opponents to kick off the tournament on Wednesday night.

The Reds are in the midst of a season which sees them fight for seven trophies; as August comes to a close, they have won the UEFA Super Cup, but lost in the Community Shield.

With their Premier League campaign bringing three wins from three, next month will see the start of two more tournaments as they get underway in the Champions League and League Cup.

Few shocks have emerged from the League Cup second round so far, though League Two side Crawley Town knocked out a much-changed Norwich and Colchester United, also from League Two, defeated Crystal Palace on penalties.

Oxford United were surprise victors with a late resurgence at home to Millwall—with Ben Woodburn netting in the shootout—while valiant efforts from Bristol Rovers, Newport County and Plymouth Argyle were thwarted as they lost to Brighton, West Ham and Reading.

Liverpool could be considered one of the favourites to win the trophy come March 1, though Jurgen Klopp has used the competition to freshen up his ranks in recent seasons.

But who can the Reds draw in the third round, and when is it held?

The League Cup third-round draw will be held on Wednesday night, after the conclusion of Lincoln City’s clash with Everton.

This means the draw is likely to come at around 9.45pm (BST), though the prospect of penalties in that tie could see it delayed until at least 10pm.

The draw will be held at Lincoln’s home, Sincil Bank, and will be broadcast live on Sky Sports Main Event and Sky Sports Football for viewers in the UK and the Republic of Ireland.

Who could Liverpool draw?

Below are the sides to have already progressed to the League Cup third round, along with the fixtures yet to be played.

* Tie postponed due to waterlogged pitch; to be played at a later date.

What ball number are Liverpool?

Liverpool are No. 3 in the draw.

When will the ties be played?

The League Cup third round will be played through the week commencing September 23.

This means Liverpool’s clash will fall between their trips to Chelsea (Sept 22) and Sheffield United (Sept 28) in the league.

In the past three years, Klopp has made seven, eight and eight changes for the third-round clashes with Derby, Leicester and Chelsea respectively.

Those have seen appearances from the likes of Marko Grujic, Danny Ward, Jon Flanagan and Dom Solanke, while Ovie Ejaria, Curtis Jones, Kamil Grabara and Lazar Markovic have made the bench over the years.

It is clear that, regardless of his comments in the the buildup, the League Cup is not a priority for Klopp, and the manager can be expected to rotate his side again.

This could give opportunities to lesser-spotted senior players such as Adam Lallana and Xherdan Shaqiri, along with youngsters including Caoimhin Kelleher, Ki-Jana Hoever, Yasser Larouci, Harvey Elliott and Rhian Brewster.

This Is Anfield will be providing coverage of the League Cup third-round draw on Twitter, while you can also follow by downloading the This is Anfield app.