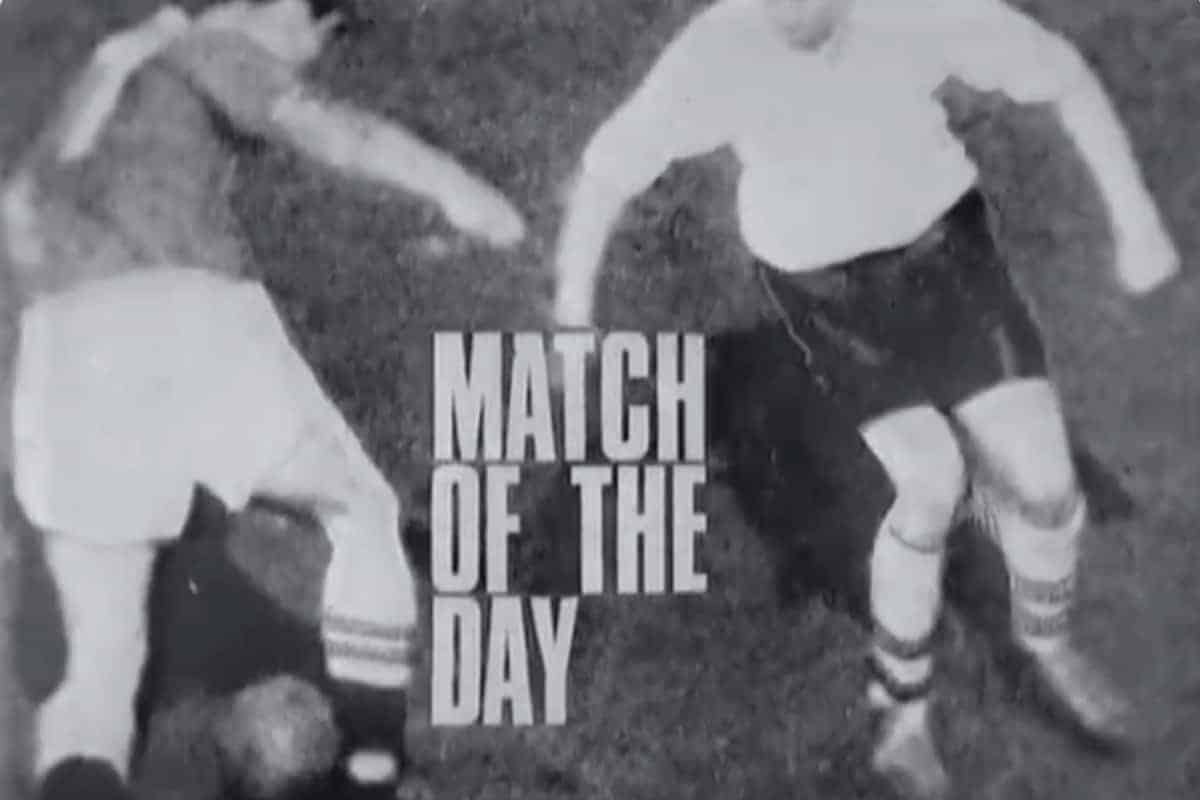 Liverpool made history on August 22, 1964 as they hosted Saturday’s opponents Arsenal at Anfield, becoming the first game to be broadcast for Match of the Day.

The Reds host the Gunners in their third Premier League game of the campaign this weekend, looking to maintain their 100 percent record and move ahead at the top of the table.

After victories over Norwich and Southampton, this is the first top-six clash for Jurgen Klopp‘s side this season, and will provide a stern test after Arsenal‘s impressive start.

Fifty-five years ago, Liverpool were significantly better off than their north London opponents, having finished the 1963/64 season as First Division champions, 12 points and seven places above the Gunners.

Their title defence began at home to Billy Wright’s Arsenal side, and it was an historic afternoon as the BBC broadcast Match of the Day for the first time, in black and white:

Here's how the first #MOTD kicked off, #OnThisDay in 1964… pic.twitter.com/2LrdTS8JwF

The two sides emerged from the old tunnel at Anfield to the Beatles’ She Loves You, with Liverpool missing Ian St John through appendicitis and Alf Arrowsmith due to injury.

Tommy Lawrence took his place in goal behind Gerry Byrne and Ronnie Moran, with Bill Shankly fielding a now-unorthodox formation including the likes of Ron Yeats, Ian Callaghan and Roger Hunt.

Hunt opened the scoring in the 11th minute after a slow start, firing an acrobatic volley into the far corner from Callaghan’s cross.

Gordon Wallace added another after the break, before a quick-fire double from Geoff Strong and Joe Baker restored parity for Arsenal heading into the closing stages, only for Wallace to score a dramatic winner from range.

Liverpool unfortunately ended the campaign in seventh as Man United won the title, though they did lift the FA Cup and reach the semi-finals of the European Cup.

In the BBC’s first edition of the show, this was the only game to be broadcast, with extended highlights similar to Sky Sports’ Match Choice coverage now.

Match of the Day eventually began to broadcast highlights from a variety of games across the First Division, and remains that way to this day, with Gary Lineker host in its 55th year.

It is likely that the Reds will headline Saturday night’s show, and hopefully with a victory as they keep up their excellent early season form.