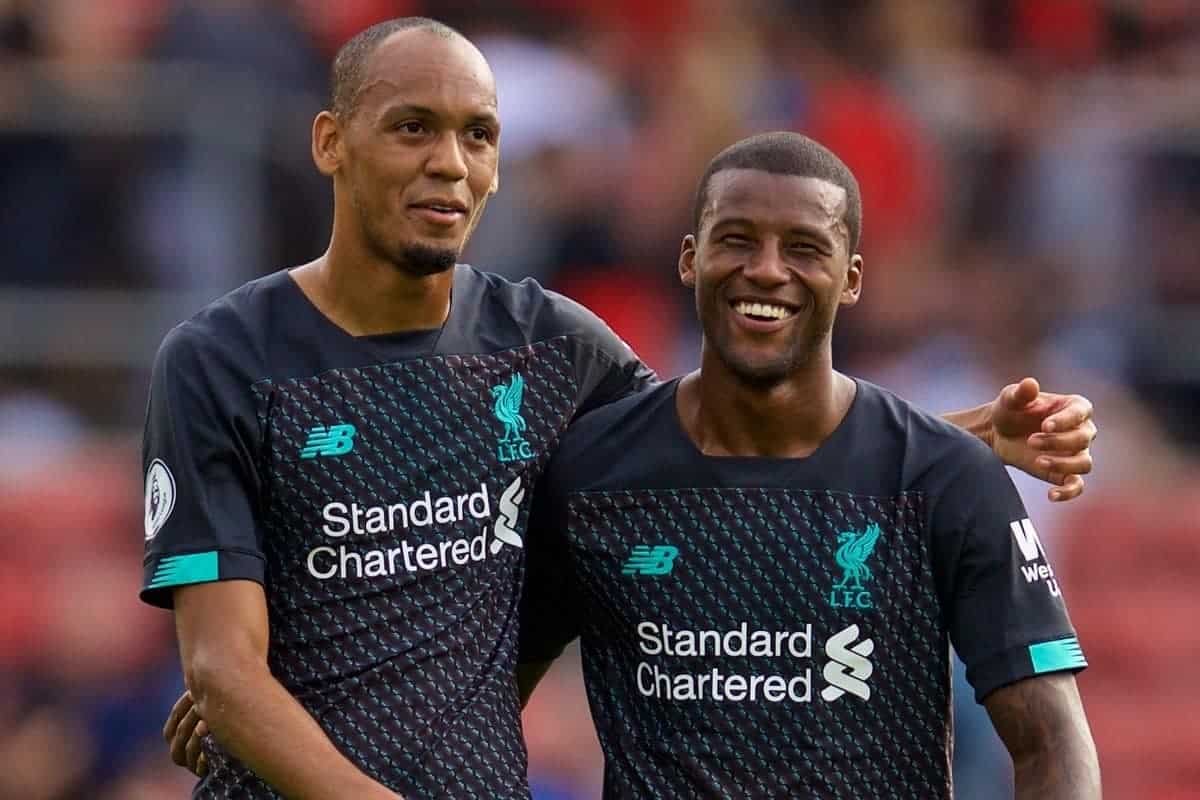 Liverpool edged past Southampton for a 2-1 victory on Saturday, with the result laying a crucial groundwork ahead of their first big heavyweight tie of 2019/20.

With Alisson injured, fitness doubts over Adrian and generally nursing the aching limbs of a long night in Istanbul—sustained less than 72 hours earlier—it was with a sharp intake of breath that Liverpool headed to Southampton.

Being sluggish in the first half and then punishing opponents for not fully taking advantage of us seems to be our new thing.

Last Wednesday, Chelsea strolled out for the second half proudly in possession of a one-goal lead, only to see it cruelly snatched from them within a short few seconds of the restart.

At St Mary’s, on Saturday, Southampton came within seconds of taking in their half-time oranges with a hard-earned goalless scoreline, only to see Sadio Mane ruthlessly plunder a goal of style and substance just as the referee began to wonder where his whistle was.

On both occasions, we then located the type of higher gears that very few other teams own.

It was akin to Liverpool giving the opposition a head-start, covering their eyes and and counting to 20, generously giving them the chance to run and hide, to make the contest a fairer one.

Footballing hide and seek, if you will?

Coming, ready or not.

This was a peculiar game. We scored our opener against the run of play, we mostly bossed the second half, but could quite easily have thrown two points away.

Adrian offered Danny Ings the chance to provoke a sharp intake of breath from us at the end.

This was our first ‘we might look back on this one’ game of the new campaign.

All that said, Roberto Firmino and Mohamed Salah both had opportunities to have doubled the amount of goals we eventually settled on.

Southampton are a peculiarity. We wouldn’t be the team we are today without having plundered them directly for half a dozen players or so.

Mane and Virgil van Dijk might be the only ones that still walk into Klopp’s team, but even the likes of Nathaniel Clyne, Dejan Lovren and Adam Lallana were defined stepping stones from the days when we used to field Paul Konchesky, Sotirios Kyrgiakos and Christian Poulsen.

Alex Oxlade-Chamberlain is also previously of their parish.

Although they no longer possess players we covet, Southampton are ambitious enough to want to create a haven of football, somewhere free of the more bludgeoning aspects of the English game.

It isn’t a place you’d see Sam Allardyce, David Moyes or Tony Pulis surface. It was the first English port of call for Mauricio Pochettino, yet conversely, they did employ Mark Hughes for a while.

Ralph Hasenhuttl was an admirable appointment as Hughes’ successor.

Given the vagaries of the Premier League, after seeing his team lose their opening two games of the 2019/20 season he is probably two further defeats from losing his job.

The odds would certainly be against him being the man that brings Southampton to Anfield in February.

Football clubs tend to project an aura and Southampton have long since stopped feeling like Southampton.

At least from the perspective of somebody who not only remembers their previous life at The Dell but went to their old ground many times over.

This isn’t just me speaking, as it is something the author Mat Guy agreed with, as a Southampton supporter, when I was talking to him a week or so ago.

The name of the club might move to the new stadium, but the spirit of the club doesn’t travel with it. See Man City, Arsenal and Leicester etc., for further examples.

It’s why I cringed for the best part of a decade over the concept of Liverpool transferring themselves into Stanley Park.

Back in 2019, however, this was a win that was made more valuable by City’s issues with VAR, Tottenham and that likeable man Pochettino.

We now have a week to rest up before the visit of Arsenal, next Saturday.

A game that will offer us our first heavyweight clash of the season.

A game where we can’t afford to be generous in our goalkeeping, spacious in our defending and presumptuous in our approach to opponents that we have had the upper hand over during recent seasons.

These early victories are simply laying the groundwork for the focus that will need to come, if we are to challenge for the Premier League title, if we are to go one better this time around.

Two wins out of two, yet the jury is still out on that one.

One thing that is certain though. That away kit is awful.