Liverpool secured an important three points in their first away game of the season, beating Southampton 2-1 thanks to goals from Sadio Mane and Roberto Firmino.

On a warm but overcast afternoon in Hampshire, the Reds took to the field a changed side from midweek, as Jurgen Klopp made three alterations with Joe Gomez, Fabinho and Jordan Henderson dropping out.

The positive news was Adrian was passed fit after suffering an ankle injury during the celebrations in Istanbul.

There was also a start for Alex Oxlade-Chamberlain, this time in midfield after a failed showing in attack in midweek; he looked much better in the middle and was Liverpool’s best player early on.

Southampton though enjoyed a strong spell midway through the first half and almost took the lead when Yoshida had a free header well saved by Adrian off a corner.

Liverpool were extremely sloppy in possession, looking very much like a side who played 120 minutes less than three days earlier. The home side had several chances to take the lead, whereas the visitors struggled to create anything of note — until stoppage time in the first half. 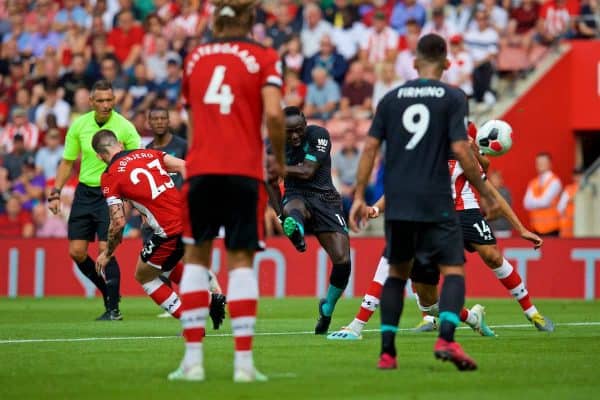 Sadio Mane, who scored twice on his first start of the season on Wednesday, struck an absolute beauty from the edge of the box, creating space for himself and curling a brilliant strike into the far top corner.

Liverpool started the second half brighter, perhaps buoyed by that Mane goal, and had chances to double their lead – not least through Mohamed Salah who was in one-vs-one but failed to beat Angus Gunn.

The Reds dominated and applied concerted pressure. It should have been 2-0 when Roberto Firmino was played in by Mane just after the hour after some lovely play, but Firmino’s side foot shot went wide when the move deserved a goal.

Liverpool then got the much-needed second goal, with Mane this time turning provider and Firmino finishing smartly from just inside the box for his first goal of the season. 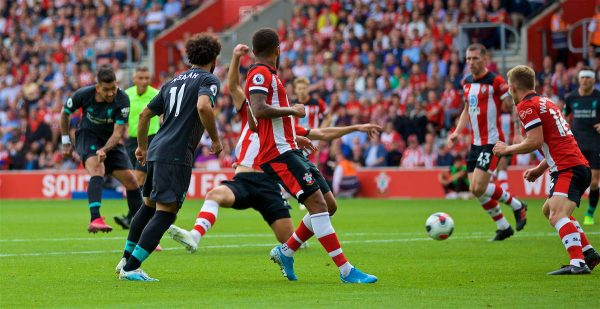 The Reds were now free-flowing and almost made it three through Andy Robertson after another superb move.

Southampton, though, were gifted a lifeline with eight minutes remaining when Adrian played an awful pass as he was closed down by Danny Ings. The ball hit Ings’ leg and went straight in.

It was extremely poor from the stand-in ‘keeper and not the first time he’d struggled with distribution from the back on his first league start for the club.

That set up a frantic finish, and Ings should have equalised three minutes later when Valery’s cross was put perfectly on a plate for him but he couldn’t connect from close range. Liverpool got lucky.

And the Reds hung on for a precious three points to make it two wins from two league games to start the season.

A massively important win, especially off the back of the Super Cup, and now a week to prepare for the visit of Arsenal to Anfield next Saturday.