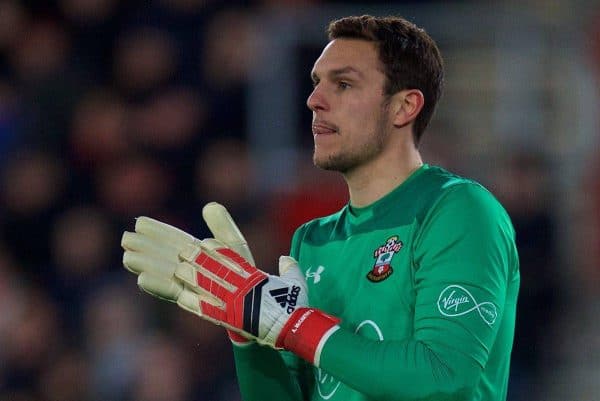 With Simon Mignolet leaving Liverpool this summer, the club’s most likely replacement is widely claimed to be a 29-year-old, one-cap England international.

Mignolet is on his way to Club Brugge on a five-year deal that could earn the Reds up to €9 million, if certain performance-based bonuses are met.

It is a deal that rewards the Belgian’s six years of service to the club, with Liverpool allowing him to depart for a relatively low fee despite there being two years left on his contract.

With Alisson established as long-term first choice at Anfield, Kamil Grabara on loan at Huddersfield and Caoimhin Kelleher sidelined with a wrist injury, the need to sign a new No. 2 is clear.

And according to both the Evening Standard‘s David Lynch and the Liverpool Echo‘s Ian Doyle, Southampton‘s Alex McCarthy is the surprise favourite for the job.

Lynch writes that McCarthy is “among the players believed to be under consideration,” but Doyle goes a step further to describe him as “the frontrunner.”

Back in June, Lynch claimed that the Englishman is “open to entertaining long-standing Liverpool interest this summer should all the pieces for a switch to Anfield fall into place.”

He added that the Reds had “tracked the 29-year-old since before his move to the south coast from Crystal Palace in 2016.”

Brendan Rodgers was effusive in his praise of McCarthy when, back in 2013, he produced an “absolutely staggering” display as Reading held Liverpool to a 0-0 draw at the Madejski Stadium.

“He has all the qualities to be a top, top ‘keeper,” Rodgers enthused.

“He’s 6’5″, makes good saves, is good on his feet and is very calm and assured despite being very young.”

The then-Reds manager added that there was “no question” over whether McCarthy could play for England.

But while he made his debut for the Three Lions in the 3-0 win over the United States in 2018, things haven’t quite panned out as expected.

That international bow came five-and-a-half years on from his first call-up, and the Guildford-born stopper has not added to his tally of caps since, with that proving to be his last time in the squad so far.

He could hope to revive his prospects under Gareth Southgate with a move to Merseyside, but he will be under no illusions as to his place within Jurgen Klopp‘s squad.

The aim would be for McCarthy to showcase his professionalism as backup to Alisson, standing in when provided in domestic cup competitions and, perhaps, this winter’s Club World Cup.

If the move transpires, it could be seen as a strange one among Liverpool fans, with the ex-QPR and Crystal Palace goalkeeper far from the quality of the club’s current No. 1.

He is undoubtedly available, however, with Southampton having signed Angus Gunn last summer, and manager Ralph Hasenhuttl left McCarthy out of his squad for Saturday’s 2-0 win over FC Koln.

Other possible options as Mignolet’s replacement are mooted as free agent Adrian, formerly of West Ham, and Cardiff’s Neil Etheridge.