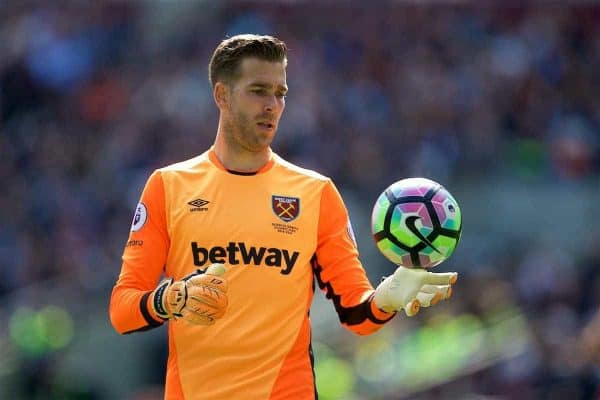 Liverpool set to sign Adrian as replacement for Simon Mignolet

Liverpool are set for a swift change in the goalkeeping department, with Simon Mignolet likely to be confirmed as sold soon—and Adrian coming in as his replacement.

Mignolet was on the bench for the Community Shield at Wembley on Sunday, but soon after flew to his home country.

There, he was in talks with Club Brugge over a £6 million deal, rising to £8m, which is expected to be completed imminently.

Fast rumours emerged over the Reds looking to Southampton backup Alex McCarthy as his replacement, but those appear to have been wide of the mark.

Instead, journalists covering Liverpool published en masse on Monday morning that the club expect to sign Adrian, formerly of West Ham, as their new No. 2 goalkeeper to provide cover for Alisson Becker.

The Mirror‘s David Maddock, Paul Joyce of the Times and Chris Bascombe of the Telegraph all reported the Reds being in contact with Adrian as soon as it became apparent that Club Brugge had put in an offer big enough to prise away Mignolet.

Adrian, 32 years of age, left the Hammers this summer and so will be a free transfer signing for the Reds, more than likely on significantly lower wages than Mignolet was on.

He received a call-up for the Spanish national team back in 2016, but did not make an appearance. Prior to his six-year stay at West Ham, Adrian came through the youth ranks at, and played for, Real Betis.

With Alisson having switched from No. 13 to No. 1 this season, Adrian is likely to take that shirt when he joins, the number he wore throughout his time at West Ham.

Along with Southampton‘s McCarthy, Neil Jones of Goal.com reports that the Reds turned down an opportunity to sign Jack Butland—once linked with the Reds every window, it seemed, until his relegation with Stoke.

In additional goalkeeping news, Andy Lonergan will not be offered a contract by the club. The ex-Preston stopper went on tour with the Reds as cover and “impressed staff with his attitude and professionalism,” but will depart without a deal.

Young goalkeepers Caiomhin Kelleher and Viteszlav Jaros will be back from injuries which saw them miss pre-season by the end of the month, with the Irish 20-year-old more than likely reprising his role as No. 3 from last term and 18-year-old Jaros continuing as a regular for the Academy sides.