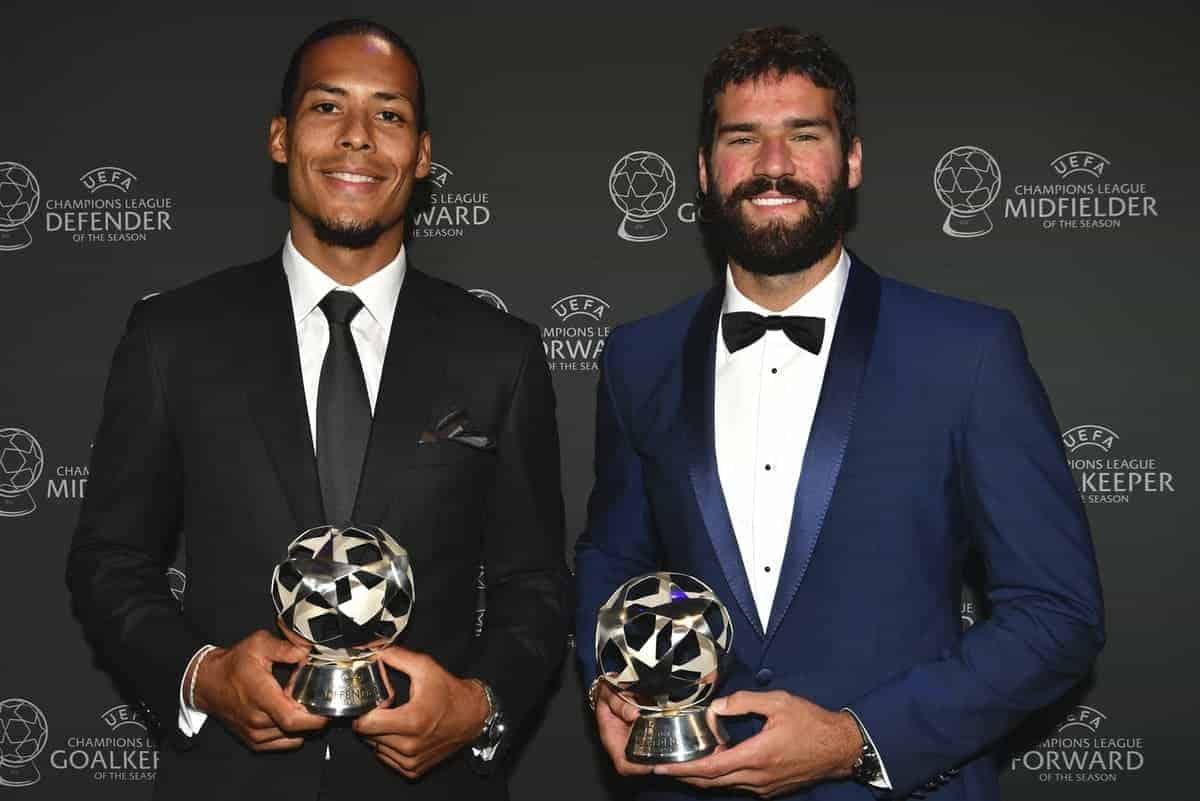 A “passion” for preventing goals, great coaching and Liverpool’s “world-class forwards” are what Virgil Van Dijk believes helped him become the first defender to win UEFA’s Men’s Player of the Year award on Thursday.

The 28-year-old Dutchman comfortably beat Lionel Messi and Cristiano Ronaldo, who have won this award five times between them, in a poll decided by coaches from the 32 teams that made last season’s Champions League group stage and 55 leading football journalists.

Signed from Southampton in January 2018 for £75 million, Van Dijk was named the PFA and Premier League player of the year last season and was also man of the match when Liverpool beat Tottenham 2-0 in Madrid to claim their sixth European crown.

And now he can add two more gongs to his collection, as he was unsurprisingly named Europe’s best defender at the Monaco award ceremony which doubled as the Champions League draw.

Speaking to reporters afterwards, a clearly delighted but typically composed Van Dijk said: “I’m very proud that I’ve been given the honour of this award—the other two guys are world-class players who have been doing it for years.

“I’ve been a defender since I was very young. I love it when good strikers don’t score against me. Preventing goals, that’s my passion.

“As a defender, you get better with experience and hard work. In training, I’m against world-class strikers, who make things very difficult, week in, week out.

“They make me better and I make them better. That’s how I see it, at least. It’s just a great environment to be in.”

One of the key statistics attached to Liverpool’s run to the Champions League title last season was that Van Dijk was never beaten in a one-on-one battle all season. But he was also recorded as the competition’s fastest player, had the second highest amount of clearances and chipped in with two goals.

Asked if having a defender for a manager at Liverpool in Jurgen Klopp was an advantage, he said: “I have Ronald Koeman with the national team as well—he was also a pretty good player.

“It’s an advantage that I have such great managers. Fantastic managers who I can learn from, on and off the pitch. That’s what I try to do. I look, listen and try to take everything in.”

On a great night for Liverpool’s rearguard, Alisson Becker was named as UEFA’s goalkeeper of the year for a Champions League campaign that saw him keep six clean sheets in 13 games and eight key saves in the final.

“It was an amazing season with two titles for me individually with the Champions League and Copa America [with Brazil],” he told reporters.

“The coaches at Liverpool have really helped me and I’m just looking forward to another season. More hard work, like last season, so we can achieve great things. That’s why I play football.”

But the first prize of the evening went to one of Liverpool’s nemeses, Eric Cantona.

The Manchester United great won the President’s Award for his contribution to the game, on and off the pitch, and he lived up to his maverick reputation by emphatically ignoring the dress code and delivering a speech that reminded many of his famous reference to seagulls and trawlers.

Speaking afterwards, he said: “It was very subjective but I’m happy—it’s a great honour.

“Football is not subjective: when you play, the best one wins. This was different but I’m very happy.”