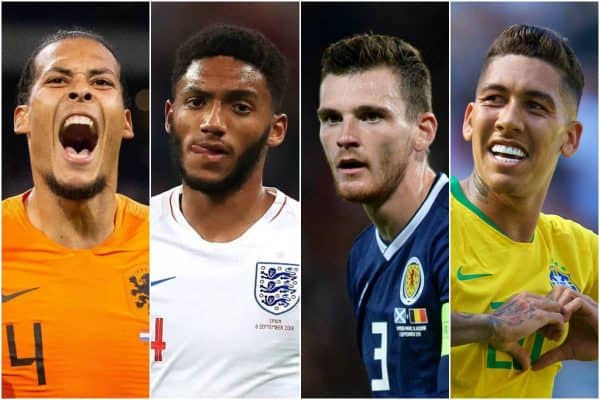 Liverpool have seen 17 senior players called up for international duty in September, but both Mohamed Salah and Sadio Mane are able to rest.

The Reds ended August with a 3-0 victory at Burnley, topping the Premier League with four wins in four and having lifted the UEFA Super Cup earlier in the month.

It was a perfect start to the season for Jurgen Klopp‘s side, but now the squad departs for various qualifiers and friendlies for their national teams.

Seventeen players from Klopp’s first-team squad have been called up, along with 13 others either out on loan or playing for the Reds’ academy sides.

Henderson was considered a minor doubt after being substituted at Turf Moor, but the Liverpool captain has confirmed he is fit to feature.

Alisson‘s injury forces him out of Brazil duty, but Fabinho is called back into the squad alongside Roberto Firmino for friendlies against Colombia (Sept 7) and Peru (Sept 11) in the United States.

Both Virgil van Dijk and Gini Wijnaldum remain staples for the Netherlands, who take on Germany (Sept 6) and Estonia (Sept 9) in their bid to reach Euro 2020.

Andy Robertson will captain Scotland in their qualifiers against Russia (Sept 6) and Belgium (Sept 9), with the latter including Divock Origi, who could also hope to feature against San Marino (Sept 6).

While he is yet to play for Liverpool this season, Dejan Lovren is part of the Croatia squad to play Slovakia (Sept 6) and Azerbaijan (Sept 9).

Loan duo Harry Wilson and Ben Woodburn can aim to feature for Wales against Azerbaijan (Sept 6) and Belarus (Sept 9), while Liam Millar was a late call-up to the Canada squad to play Cuba (Sept 8 and 11).

Caoimhin Kelleher is back from injury and will join the Republic of Ireland under-21s, while Kamil Grabara is with the Poland under-21s and Rhian Brewster with the England under-21s.

Sepp van den Berg is with the Netherlands under-19s and Ki-Jana Hoever is an age group below with the under-18s.

Wales under-19s have retained Morgan Boyes and Neco Williams, while the latter’s younger brother Keelan Williams will play for the Wales under-17s.

Matteo Ritaccio joins the United States under-20s for their clashes with Croatia (Sept 5) and the United Arab Emirates (Sept 9) in Slovenia.

Finally, Allan Rodrigues has been called up by the Brazil under-23s to take on Colombia (Sept 5) and Chile (Sept 9).

Liverpool in the September International Break