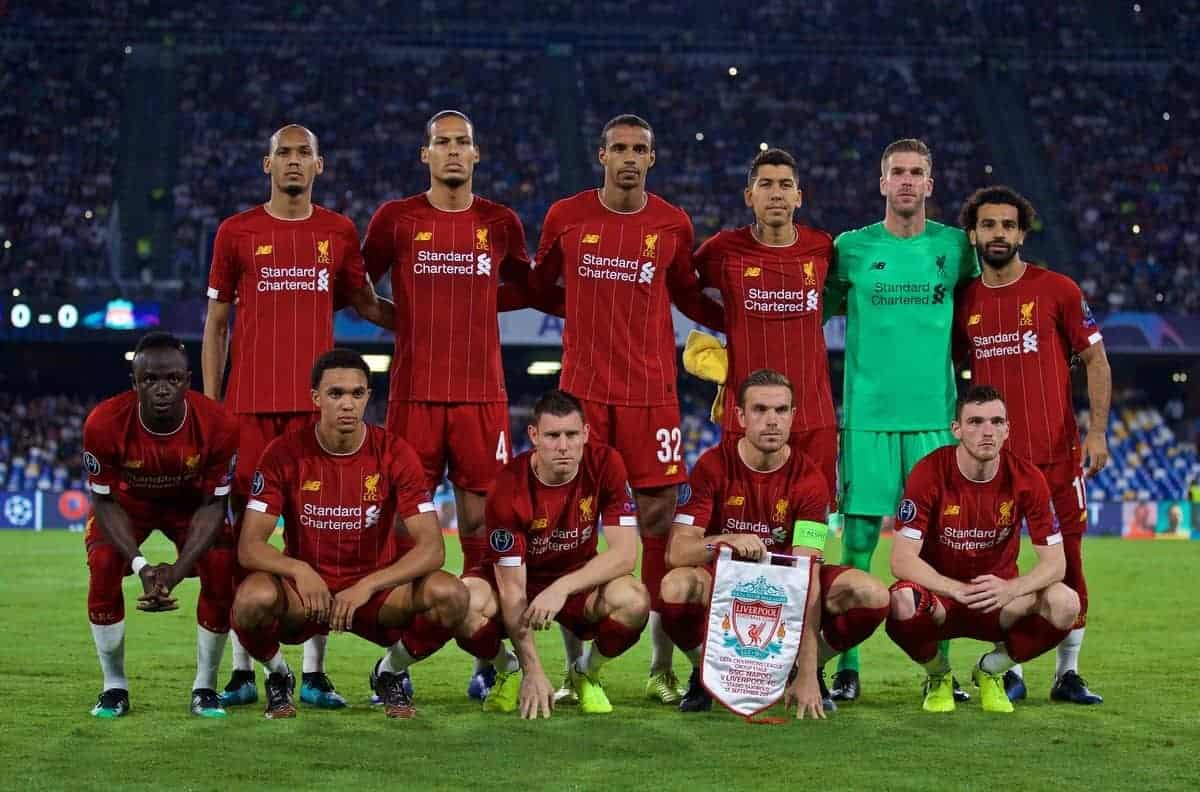 Humid conditions affected a Liverpool team already stretched from a busy spell. It was a night of tired, average performances and a 2-0 loss at Napoli.

There were some important contributions from from the deputy stopper, and he made a couple of good stops.

Two strong saves from Fabian Ruiz, who hit his shots with power but found his compatriot solidly behind them to keep them out.

Adrian made a brilliant airborne save from Dries Mertens at the start of the second half, and got a hand on the Belgian’s penalty, but it was too powerful for him to keep out.

A moment of confusion with Robertson for the second goal was the one negative in an otherwise good performance, but even that was a problem created by his defence rather than him.

Spent much of his time keeping an eye on Lorenzo Insigne, which stunted some of his attacking prowess.

Carlo Ancelotti knew Liverpool’s full-backs are one of their main outlets in attack, so made sure Trent had to defend, too.

He covered across well to tackle Hirving Lozano on one occasion, winning the foul from Mertens to remove the threat.

Important header cut out a dangerous Mertens cross ahead of the lurking Lozano.

Not really at fault for any of the goals, and was tidy enough with his passing.

His stray pass late on in the game allowed former Spurs man Fernando Llorente to steal in and score the second for Napoli.

For much of the game he was composure personified, but this late lapse will be highlighted now he’s considered one of the best in the world.

The good things he does will be lauded, perhaps exaggerated, but the bad moments will be scrutinised more than most players.

Uncharacteristically quiet in the first half. Napoli’s formation with a front four affected both Liverpool’s full-backs going forward.

Booked for a foul off the ball on Jose Callejon, then put his leg across the same player in the box to concede a penalty.

Even though the flick of his foot didn’t catch the Spaniard, and even though the Callejon flung himself to ground, the challenge was a daft one.

It gave the referee a decision to make, and VAR no real reason to overturn.

Possibly carrying a knock, but Liverpool don’t have another senior left-back…

Everywhere all of the time.

Great tackle on Ruiz, galloped forward before playing Mohamed Salah in but the forward couldn’t make anything of the chance.

Protected the back four through the middle, but couldn’t do much to stop either goal which came from defensive errors from those behind him.

Good tracking of Insigne down the right, but couldn’t take advantage of being in a three-man midfield against Napoli’s two.

Sent a pass through to Sadio Mane but forced him a bit wide, and made three key passes overall.

Shot over in the first half. Both he and Henderson struggled to link play and both had a pass success lower than 70 percent going in at half-time.

Had a good chance towards the end of the first half, but his left-footed effort was poor.

From the resulting corner he put one on Roberto Firmino‘s head but the striker sent it wide.

It was the only good thing he did, and was subbed after picking up a yellow card.

Made some good early forays forward, sprinting at the Napoli defence with intent.

Was involved in another great battle with Kalidou Koulibaly, but only really managed to get around him once.

Was blocked off by the Senegalese when sent through by Fabinho, and forced a good save from Alex Meret after pouncing on a Kostas Manolas error—one of Liverpool’s better efforts.

Found himself in good positions but couldn’t have the influence on the game he did against Newcastle.

Headed wide with Meret rooted to the spot.

Maybe the international break and the jet lag caught up with him, as it looked like it had for a few of Liverpool’s players.

His left-footed shot stung the hands of Meret, and along with Salah’s shot was one of Liverpool’s more convincing efforts on the night.

Through on goal two-on-one with Salah alongside him, but completely misjudged the timing and weight of the pass.

Perhaps had too much time to think, but either way he lost his composure at a vital moment.

Couldn’t hold on to a fizzed Mane pass which would have produced a chance on goal.

Fresh having missed the international break, he will have been disappointed not to start.

It’s always a good tactical battle between Klopp and Ancelotti, and the Italian causes Liverpool more problems than other managers.

Klopp didn’t start any of his fresher players such as Xherdan Shaqiri, Alex Oxlade-Chamberlain or Joe Gomez, and the Swiss might have especially been useful having not taken part in the international break.

None of the youth players were used on the bench, which will be disappointing for some, and especially Rhian Brewster who many thought would be involved.