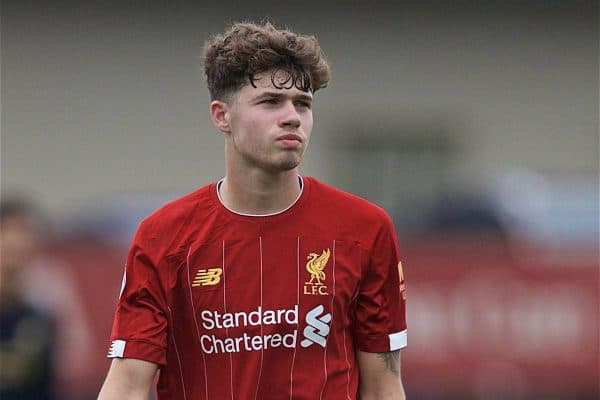 Liverpool U21s picked up their first point in the EFL Trophy group stage with a 1-1 draw at Fleetwood Town, but missed out on a bonus point with a penalty shoot-out defeat.

Having lost 3-2 in their first group game, the pressure was on the U21s to pick up a result at Fleetwood on Wednesday night—made all the more difficult by the fact the game was on at the same time as the senior side played MK Dons in the League Cup.

With several players featuring for Jurgen Klopp‘s team instead of in the EFL Trophy, a much-changed lineup was on display for the trip to Fleetwood.

Neil Critchley fielded his team in a 3-4-3 system, with Billy Koumetio stepping up from the U18s a the heart of the defence, Layton Stewart leading the attack and Yasser Larouci employed on the right of the front three.

Both goals came late on in the piece, with the home side taking the lead on 76 minutes before Tom Hill teed up right-wing back Neco Williams to equalise moments later.

It was Williams’ second goal of the competition, after he scored one of the Reds’ strikes at Oldham in early August.

A 1-1 draw was the result at the final whistle, securing a point for the young Reds, but under the terms of the competition all draws go to a penalty shoot-out—giving one team the opportunity to earn an extra point.

Williams and Stewart both scored, but midfielder Jake Cain failed to net Liverpool’s third. Elijah Dixon-Bonner brought the scores level again after Fleetwood missed their fourth, but Tom Clayton unfortunately couldn’t score the decisive fifth for the Reds, who lost 4-3.

The Reds sit fourth in their group after two games, with Oldham and Accrington both sitting on three points after one match each and Fleetwood on two after two.

Liverpool U21s face Accrington on 29 October in what is a must-win match if they hope to progress past the group phase.