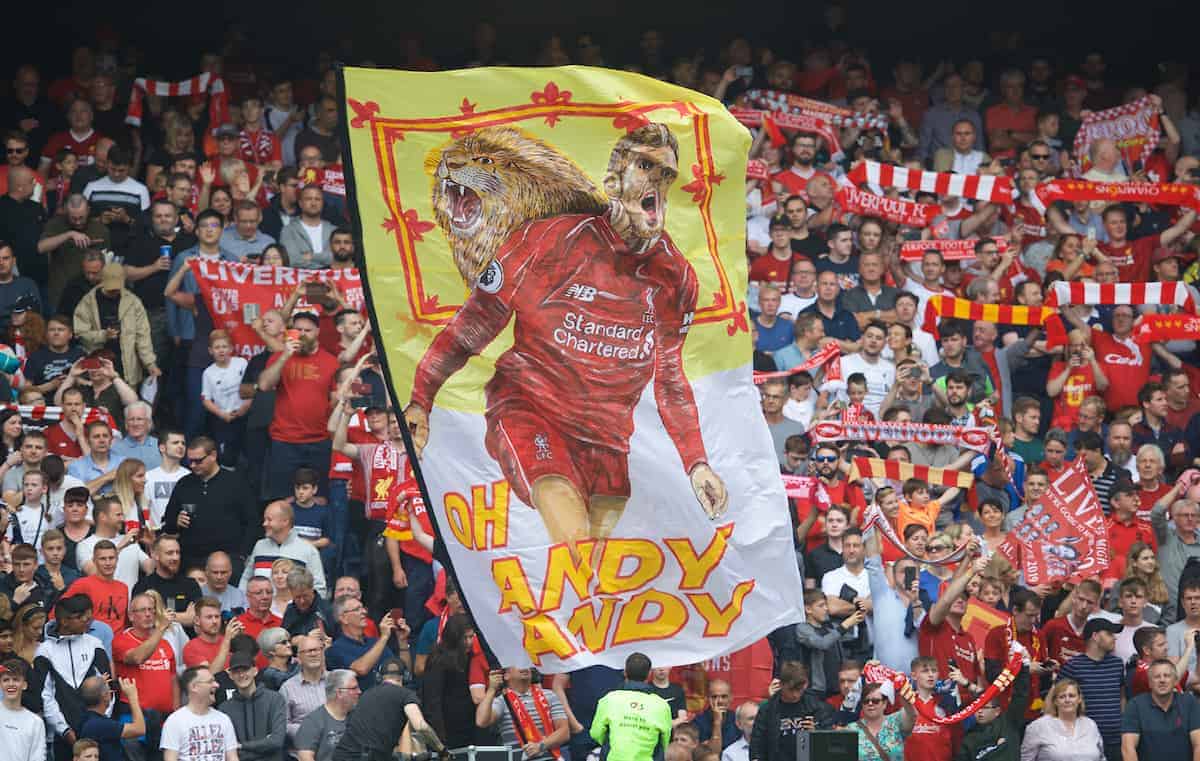 Andy Robertson took the arguably wise decision to deactivate his Twitter account on Wednesday, with scrutiny posing a big challenge to the Liverpool left-back.

You don’t have to do anything wrong to get abused on social media.

Simply existing is often enough to rile the usually faceless cowards that lurk in the dark anonymity of the cyber world.

But when you’re a high-profile footballer with a Twitter account and you’re perceived to have committed the heinous sin of not playing as well as you can, then personal abuse is an occupational hazard.

Back in the day the biggest danger to a footballer’s health was a shuddering Tommy Smith challenge or Glasgow kiss from Duncan Ferguson.

Now, with tackling outlawed, the biggest danger is to a footballer’s mental health from derogatory words tweeted by keyboard warriors who will routinely abuse someone online, but would want a selfie if they met in real life.

Andy Robertson knows all about the faux world of social media.

The Liverpool left-back got stick from Scotland fans after failing to perform like he does for the Reds during the September international break. The Mirror listed some of the more polite tweets:

“And that is why Robertson should never be ahead of Greg Taylor.”

We’ve been here many times before with international football fans singling out Liverpool players for criticism because they don’t play as well for their countries.

Far be it from me to question the intelligence of such critics, but when you’re used to playing alongside Virgil van Dijk and with Sadio Mane ahead of you I imagine it’s not quite the same when you’ve got to work with Liam Cooper and Scott McTominay instead.

Robbo isn’t even the first Liverpool full-back to get it in the neck north of the border.

“One guy even shouted to me that he had ‘paid a fortune to watch this shit,'” recalled Stevie Nicol in his 2016 autobiography after the Scots failed to score in the first half of a game against San Marino.

Gary McAllister, Scotland’s captain, retired from international duty in March 1999 after getting booed by a section of Tartan Army supporters in a game against the Czech Republic. He won the treble with Liverpool two years later.

It isn’t just a Scotland thing either, as John Barnes can testify, but the difference now is that abusive throwaway comments at a match have been accentuated by ongoing online abuse from a wider variety of abusers.

Followers of both the team and country a player represents—and also followers of their rivals—no longer have to attend a match and hurl abuse in person.

Thanks to social media you can now abuse footballers at a date and time that is convenient for you. You know, like telling Andy Robertson to ‘go fuck a sheep’.

Robertson returned from international duty and had brilliant game against Newcastle, creating Mane’s opening goal and being unlucky not to score himself.

Afterwards he was asked about the stick he’d got while away with Scotland.

“That’s something you have to deal with when you go up there,” he said.

“Darren Fletcher dealt with it for 10, 12 years when he was at the top at Man United and now I’m facing it. That’s something I have to deal with up in Scotland and I need to deal better with.”

How does he deal with it?

“I lock myself away. I don’t like to talk to anyone. That’s up to me to deal with and I dealt with it in the way that I felt was right and I’ll continue to do that.”

I don’t know for certain, but based on those comments I’m willing to speculate that Robertson was considering taking a Twitter break at that point.

So, when more abuse came his way from followers (not supporters, there’s a difference) of Liverpool and anonymous trolls after the Reds’ 2-0 defeat to Napoli in the Champions League, jibbing Twitter off was an obvious course of action to take.

Of course, that gave our detractors a free hit to use a ‘Liverpool fans abuse Robertson’ line like it was some kind of mass haranguing of the lad, while I saw a Newcastle fan being abusive because he deactivated his account.

Quite why Robbo bore the brunt for Jose Callejon diving into him to win a penalty and for Van Dijk’s slack pass leading to the second goal in Naples makes little sense, but there’s no point trying to reason with trolls, especially those who get cheap thrills from sparking a reaction.

The upshot of all this is, however, that Robertson is facing his first major test of character as a Liverpool player since breaking into the team.

There’s nothing wrong with his form for Liverpool, but can he shut the negative noise out and continue to be the best left-back in the Premier League?

Or will it get into his head and ultimately affect his performances?

We can’t afford the latter to happen. Robertson is Liverpool’s only specialist left-back and anyone who saw the under-19s’ UEFA Youth League draw with Napoli will know that, defensively, Yasser Larouci is nowhere near ready to step up yet.

James Milner can fill in, but not at the same level: Robbo is arguably the most irreplaceable player in Jurgen Klopp‘s team, after Van Dijk.

But in the case of Andy Robertson I hope it galvanises match-going Reds to remind him just how highly he is regarded—and online Liverpool supporters to drown out the abusers.

When Robertson ruffled Lionel Messi’s feathers in the opening exchanges of the Champions League semi-final second leg last season, “oh Andy Andy, Andy Andy Andy Andy Robertson” was one of the loudest, most raucous player chants I’d ever heard in over 30 years of going to Anfield.

He could do with that kind of support again now.