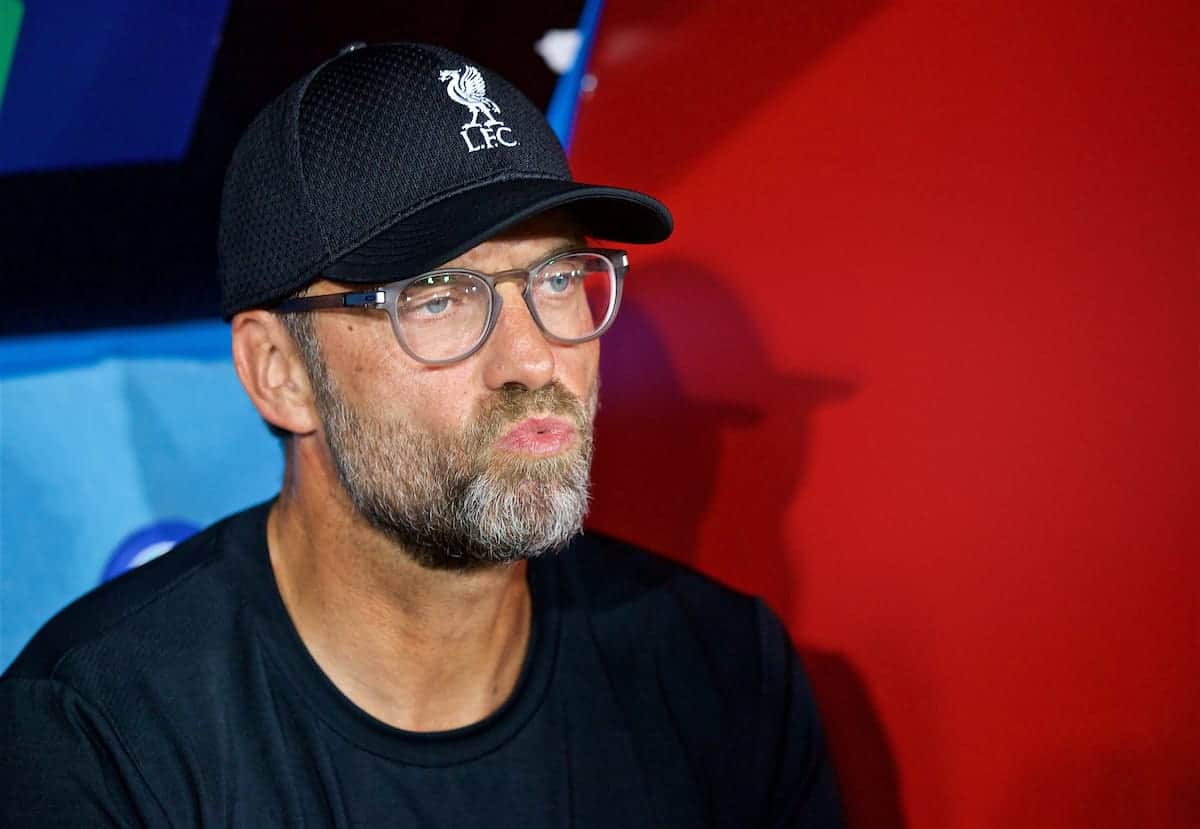 Liverpool’s 2-0 loss to Napoli on Tuesday night was their first in a competitive game since May, and it brought a now-unfamiliar feeling of irritability for fans.

A 2-0 defeat and the now unfamiliar sensation of a loss.

A full moon kind of night in Naples to kickstart the defence of our European title it was then.

We weren’t alone in stalling on the opening night though.

Even this concept is all a bit 1980s, when losses were exceedingly rare.

The thing with getting beaten once in a blue moon is that, in time, those very occasional reversals will start to feel like the most painful defeats imaginable, simply because it is an emotion you aren’t required to flex very often.

In the aftermath of this opening group game loss, a well-respected Liverpool supporter, writer and podcaster, from another parish to this one, claimed he’d never been less bothered about Liverpool losing a game.

I was immediately sceptical about the statement. It felt like he was trying to quantify to himself that the strange foreign feeling he was encountering was something and nothing.

To an entire generation of Liverpool supporters who have witnessed some startlingly poor vintages of this team we love, to go alongside the periodical rises in prominence, this feeling is going to be something of a culture shock.

Take away the pre-season games, which mean little once the competitive games are up and running, plus a penalty shootout going against us when trying to win a novelty-sized octagonal shield of minor significance, and we are looking at our last loss of a competitive game being back at the beginning of May, in Barcelona.

Of course, that defeat was turned around at Anfield, which now makes that evening at the Nou Camp seem like a cruel joke that we played on Lionel Messi and his mates.

It doesn’t feel like a 90-minute defeat, more that it was a 180-minute work of Machiavellian art.

So, if you take Barcelona out of the equation, we have to go all the way back to the beginning of January to find the last true body-blows of defeat, when we lost at Man City and Wolves in the Premier League and FA Cup respectively, over the span of five days.

If you are feeling a dull ache today, a hangover after the misfortune, misadventure and sheer chicanery of events at the San Paolo on Tuesday evening, then take it as a sign that you have become accustomed to Liverpool winning.

Take it as a sign that you are now unaccustomed to Liverpool losing. You are no longer desensitised to the concept Liverpool getting beat.

I can find things that are strange in every game of football, I suppose I have a short attention span when it comes to the trans-mundane aspects of the game.

I look for the shapes and patterns a lot of the time. I seek out the peculiarities.

We had a chance to score, but didn’t do enough with it, then we allowed Napoli to win themselves a penalty.

This was followed by a gift of a second goal deep into injury time at a stage when I still felt we might yet create a moment of magic to claim a point.

Karma has been our friend of late, but she hadn’t made the flight to Naples apparently.

Even VAR Turned on Us

I’m not against VAR, but I accept that unlike Hawkeye, the final decision in football will always be decided by human interpretation.

Napoli’s penalty should never have been awarded in the first place, while it should have been overturned by VAR. A yellow card for simulation wouldn’t have been an outlandish conclusion to the matter.

To compound the issue, Adrian got a hand to the resultant spot-kick. As shapes and patterns go, it was badly flawed.

So, we pick up largely where we left off last season when it comes to away Champions League group games.

We’ll need to do better in Genk and Salzburg and make sure Napoli get their comeuppance at Anfield.

On one hand, an all-English Champions League final and all four major European final berths being monopolised by Premier League teams looks a bit old hat suddenly, what with the scoreline inflicted upon us by Napoli and Chelsea losing at home to Valencia in dramatic penalty-missing circumstances.

It was a weird night across the board though, with Inter Milan reliant upon an injury-time equaliser at home to Slavia Prague, an imperious Borussia Dortmund somehow failing to beat a psychologically scarred Barcelona and only one home win being gleaned beyond what was happening in Group E.

We’ll be back in the European groove in a few weeks’ time.

Back in the Premier League, at Stamford Bridge this Sunday, it will be two teams facing each other with points to prove to themselves, perhaps, more than to one another.

There is no need to hit the panic button however, even if we don’t collect all three points at Chelsea, but it is OK to be a bit irritable about the performance in Naples, or at least the outcome.