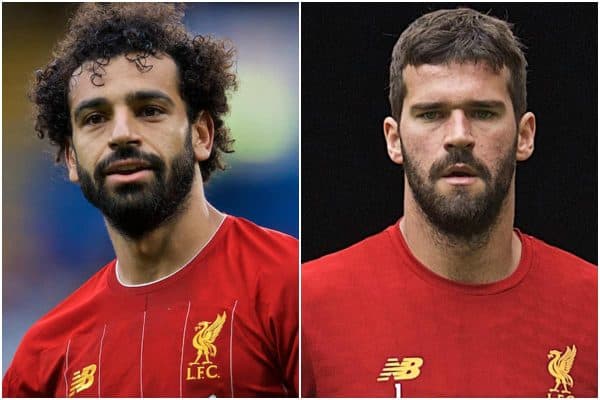 Huge boost for Liverpool with key duo set to start vs. Man United

Liverpool have been handed an early double boost ahead of the return of domestic action, with reports of full fitness for both Mohamed Salah and Alisson.

Neither player has been on international duty over the past week, with Salah excused from an Egypt call-up and Alisson completing the last stages of recovery from injury.

The forward has been a regular again this season for the Reds—but there were fears over an injury just before the international break after he was subjected to a late and dreadful tackle by Leicester‘s Hamza Choudhury.

However, scans alleviated any lasting concerns of damage to Salah’s ankle and The Echo‘s Ian Doyle reports that he is fit and ready to play this weekend.

The club had already intimated that they were reasonably confident of his involvement, and Salah has spent part of this international break in Dubai on holiday.

Perhaps the bigger news on this occasion, though, comes at the opposite end of the pitch.

Alisson has been absent since the opening league game of the season, when he left the pitch injured against Norwich.

Since then he has been recovering from a calf tear, with new signing Adrian playing between the sticks in his absence. Alisson has missed 11 games in all competitions with his injury, but has been undergoing extra training with the keeper coach John Achterberg, says Doyle.

His timing could hardly be better, as Liverpool prepare to face Man United; a perennial rival, but one in disarray at present and languishing in the bottom half of the table.

A long-overdue win at Old Trafford on Sunday would only serve to highlight the gap between the clubs on the pitch at present, as well as extend Liverpool’s 100 per cent winning run to nine for the season and 18 in a row.