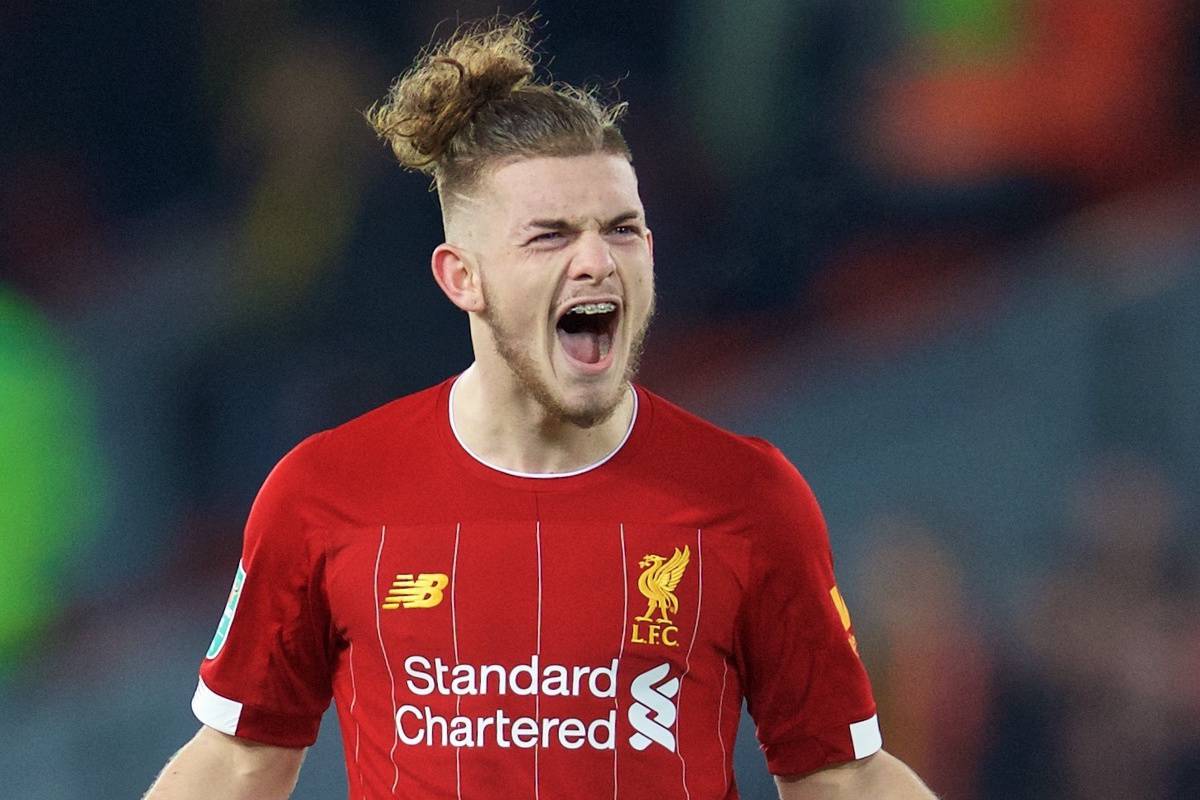 Harvey Elliott followed up his impressive debut with another strong showing on his Anfield bow, as Liverpool overcame Arsenal in the League Cup.

Elliott became the youngest Reds player to feature at Anfield on Wednesday night, adding to his long list of records five months ahead of his 17th birthday.

The poise he took onto the field is remarkable for a 16-year-old, with a clear confidence in his prodigious ability as he joined Rhian Brewster and Divock Origi in Jurgen Klopp‘s front three.

It wasn’t a perfect night for Elliott, as his sloppy backpass led to a goal for Gabriel Martinelli to make it 3-1, but soon after he won a penalty to allow James Milner to reduce the deficit in an eventual 5-5 draw.

The resulting penalty shootout saw Caoimhin Kelleher and Curtis Jones become the heroes, with Elliott not taking a spot-kick as Liverpool won 5-4.

But his interactions with the Anfield crowd both during and after the game caught Klopp’s eye, and speaking to journalists after the game the manager highlighted it as one of “a couple of moments where I was really touched.”

“It’s easy to be convinced about him when you see him training,” he said of Elliott, who arrived from Fulham in July for a fee yet to be decided.

“He is an exceptional talent, absolutely, and he’s a nice kid as well.

“To see him, how he encouraged the crowd around the corners…I had a couple of moments where I was really touched tonight, to be honest. So for a few moments, that’s really cool.

“And when I was already in the dressing room and I saw on the TV screen that he’s still doing his lap of honour and giving pretty much everything away, that’s too nice.

“For tonight we can speak about them for as long and as often as you want, that’s great. But they all have to work.

“The younger you are the longer your career [ahead] will be and they have to prepare for that.

“But to give these kinds of signs they gave tonight, I think was really nice for the people I think. On the bench there were a few really good talents [too].

“I liked it a lot, he played really well, not like you would expect a 16-year-old boy to play, that’s cool.”

There is an intangible quality to Elliott that separates him from most other players of his age, and many older than him too.

Though there are obvious blemishes on his record—having just returned from a two-week suspension following an FA charge against his social media activity—he is an increasingly mature talent.

Elliott took to Instagram after the game to label it a “childhood dream,” and his performances are no doubt amplified by the fact he grew up a Liverpool supporter.

While it remains early in his career and earlier in his time with the Reds, there are clear signs that he can play a major role under Klopp in the near future.