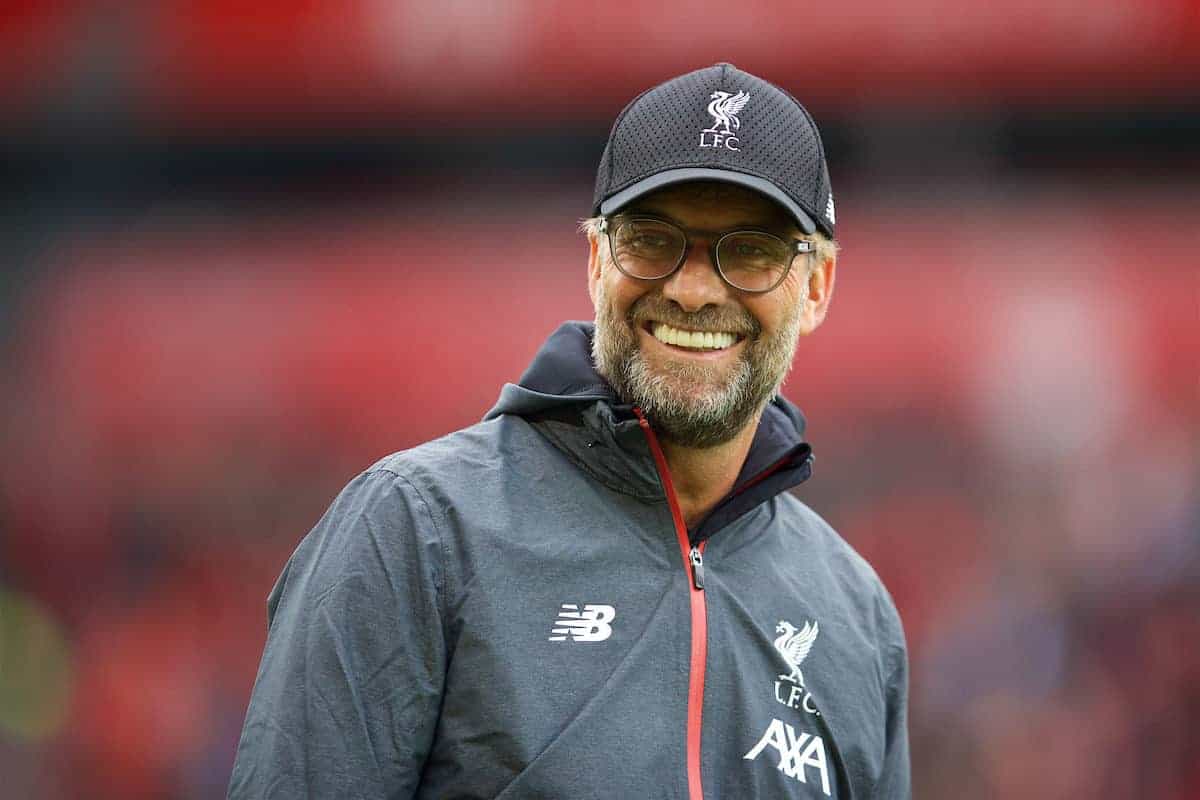 Jurgen Klopp has rejected the ‘mind games’ used in the buildup to Liverpool’s trip to Man United, and is instead focused on avoiding a media-made “banana skin.”

Ahead of the Reds’ clash at Old Trafford, Ole Gunnar Solskjaer has suggested this is the “perfect game” for his United side to bounce back from a 1-0 loss at Newcastle.

Furthermore, there have been mixed messages over the fitness of Solskjaer’s squad, namely David de Gea and Paul Pogba—who are expected to miss the game, but with a lingering possibility this could be a bluff.

For Klopp, these situations are all “part of the preparation” for a high-profile clash in England, with the manager explaining on Friday how it differs to his time in Germany.

“Four days ago I think Ole said ‘no chance’ for De Gea and Pogba, today it’s a ‘maybe’, tomorrow it’s a ‘100 percent’, Martial will back, all that stuff,” he told reporters at Melwood.

“That’s how all these games are played. No problem with that.

“But in the end, I’m old enough, we are experienced enough to judge all the things in the right way.”

Klopp continued: “The less the opponent manager knows about your lineup, the better it is. That’s an advantage.

“I’m four years in England, it’s still really strange how little you know about if a player is fit or not; in Germany we allow the press to watch training four or five times a week—that would mean you [journalists] really have to work!

“So if a guy is not in training, it means you cannot hide anything. It’s not like you can say ‘oh maybe he can play, maybe he can’t play’, and stuff like this—everybody knows it.

“He can play but he didn’t train five days in a row, so that doesn’t work.

“Here it’s like ‘oh!’ when you see the lineup ‘interesting, I thought he had a broken leg’ or whatever, ‘now he is back’.

“It’s not a mind game, it’s just part of the preparation, that’s it.”

Sky Sports in particular have billed the clash as one balanced firmly in the favour of Liverpool, and this is no surprise given both their desire for narrative and the 15-point gap between the two sides.

A host of pundits took turns to select their ‘Combined XI’, with many—perhaps rightly—not including any United players, and Klopp described this as “building a banana skin” for the Reds.

“This game is so easy. Not the game against United: the game that everybody else around plays,” he said.

“On Sky when you made the combined lineup and you had 11 players of Liverpool, that’s like a joke. It’s like building a banana skin. That’s what everybody wants to see.

“I’m not influenced by it, to be honest. I’m 100 percent aware of the strength of Manchester United.”

Given the history between the two clubs it could be easy to get bogged down by statistics and stories, but for Klopp the aim is simply to add another win to Liverpool’s eight in eight so far.

The manager delivered a firm message to his side, and urged them to ensure United’s rebuild waits another week.

“We have to be very, very lively,” he explained.

“[United] is a really good football team, in a situation they don’t like so they want to change it.

“We have to make sure that if they want to change it, they have to start a week later. That’s all.”