Liverpool snatched a priceless 2-1 win over Leicester at Anfield on Saturday, thanks to a stoppage-time penalty from James Milner.

Despite rumours of an Alisson return, Adrian continued in goal for Liverpool.

The Spaniard was largely untested in the first half, but made one good save from Caglar Soyuncu, who was in an offside position.

He allowed James Maddison’s equaliser to squeeze through him far too easily, though – Alisson would likely have saved it.

An excellent September has seen Alexander-Arnold nominated for both the Premier League Player of the Month and Goal of the Month awards.

He carried on in this rich vein at Anfield, proving to be a constant source of energy down the right flank.

One sensational cross wasn’t quite converted by Roberto Firmino and his delivery was dangerous throughout the afternoon, barring a couple of sloppy late efforts.

His final game as a 20-year-old was an influential one.

Lovren was a surprise inclusion at the heart of the Reds’ defence, making his first start since May.

Although he never quite carried the same authority as Joel Matip, he made one important interception to deny the on-rushing Jamie Vardy and was reliable all game.

The Croatian vindicated Jurgen Klopp‘s decision to play him.

Van Dijk produced arguably his worst performance for Liverpool in midweek, but he was a far more authoritative figure on Saturday.

One trademark long-range pass with inches away from finding Sadio Mane and he was impressive in all defensive aspects of his game.

As if he was going to play poorly twice in a row!

Robertson maintained his record of playing in every minute in the Premier League this season.

Although the Scot wasn’t as noticeable or precise with his crossing as Alexander-Arnold, he still performed well on the day.

Shot straight at Kasper Schmeichel in the second half and defended well.

Fabinho was again tasked with his “lighthouse” role in front of the defence, proving as consistent as ever.

He used the ball neatly, but when more creativity and guile was required, he never shirked the responsibility to try his luck.

The Brazilian bit into tackles, earning a yellow card in the first half, and was generally effective.

Wijnaldum kept his place in midfield ahead of Jordan Henderson and he was subtly key in his own unique way.

Strong physically and displaying better positional sense than in the second half against Salzburg, the Dutchman kept things ticking over.

There were again times when Wijnaldum left supporters wanting more in the final third, but he did the job asked of him well.

Milner came in for Henderson, following a good cameo against Salzburg, and he ended up being a pivotal figure.

There were times when his ageing legs looked potentially problematic up against a vibrant Leicester midfield, but he more than held his own.

The veteran produced the pass of the match to set up Mane for the opener, then coolly slotted home an enormous penalty in the dying seconds.

Liverpool’s most lethal man from the spot since Dirk Kuyt.

Starting on the right-hand side, a way of nullifying the runs of Ben Chilwell, Mane was his side’s star man.

He fired straight at Schmeichel after a long run, but he wasn’t to be denied, finishing clinically from Milner’s pass soon after.

One superb tackle on Chilwell epitomised Mane’s work-rate, which was exceptional.

Firmino was used out on the left, as Klopp completely switched his front-three around.

The South American never looked as happy as he does in his central position, but he still found pockets of space in that area.

Still Liverpool’s Player of the Year so far – ahead of Mane… just.

Salah was Liverpool’s hero on Wednesday, and while he wasn’t at his most noticeable here, he ran Leicester‘s defender ragged in a central role.

He showed his strength a number of times up against Soyuncu, but his final ball was erratic, to say the least.

As always with Salah, the positives outweighed the negatives.

The skipper was solid when he came on, but nothing more than that.

Only on the pitch in stoppage time. 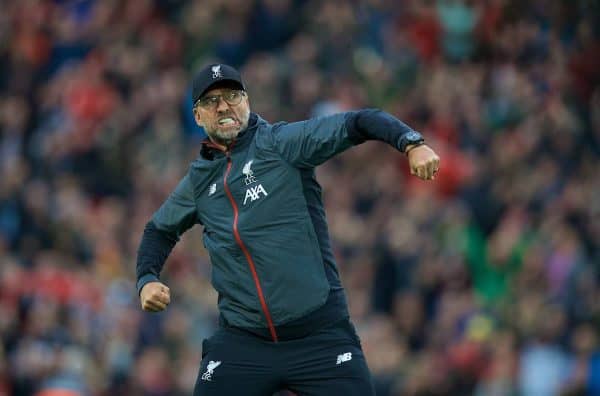 What a remarkable winning mentality Klopp has instilled in his players.

Liverpool weren’t at their scintillating best against the Foxes, but as is becoming the norm, they just find a way to win.

Klopp’s decision to play Lovren raised eyebrows pre-match, but it was a decision that paid off, as did bringing Milner in for Henderson.