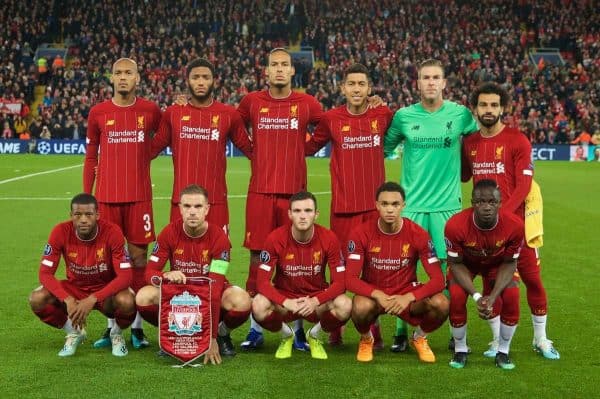 Liverpool 4-3 Salzburg: Player Ratings – What the media and statistics say

Liverpool beat Salzburg 4-3 in a Champions League thriller on Wednesday evening, with the front three comfortably outperforming the rest.

Jurgen Klopp‘s side knew that victory was imperative after losing to Napoli last time around—what unfolded was a rough night at Anfield.

Sadio Mane, Andy Robertson and Mohamed Salah fired the Reds into a stunning 3-0 lead, but Hwang Hee-chan reduced the arrears before half-time.

Takumi Minamino and Erling Haaland made it 3-3, only for Salah to score the winner midway through the second half.

Salah (8.0) was seen as Liverpool’s star man overall, as he once again added to his remarkable goalscoring tally for the Reds.

Although not always at his most devastating, he proved to be the match-winner, standing tall while those around him were struggling.

This is Anfield’s James Nalton felt Salah “looked a threat whenever he managed to get involved,” using his pace to terrify the Salzburg defence.

Mane (7.9) wasn’t far behind his fellow forward in the reckoning, with the Senegalese bagging a beauty to open the scoring.

The Redmen TV’s Ross Chandley thought the goal “set the tone for the rest of the first half,” in which Liverpool tore their opponents to shreds.

Nalton awarded him TIA’s Man of the Match award, describing him as “the best defender on the night, as well as one of the best attackers.”

TIA’s readers gave him just 3.9 out of 10, and David Maddock of the Mirror thought the Dutchman was “a little off.”

Next up for Liverpool is Saturday’s visit of in-form Leicester in the Premier League, with a more assured display required against Brendan Rodgers’ side.