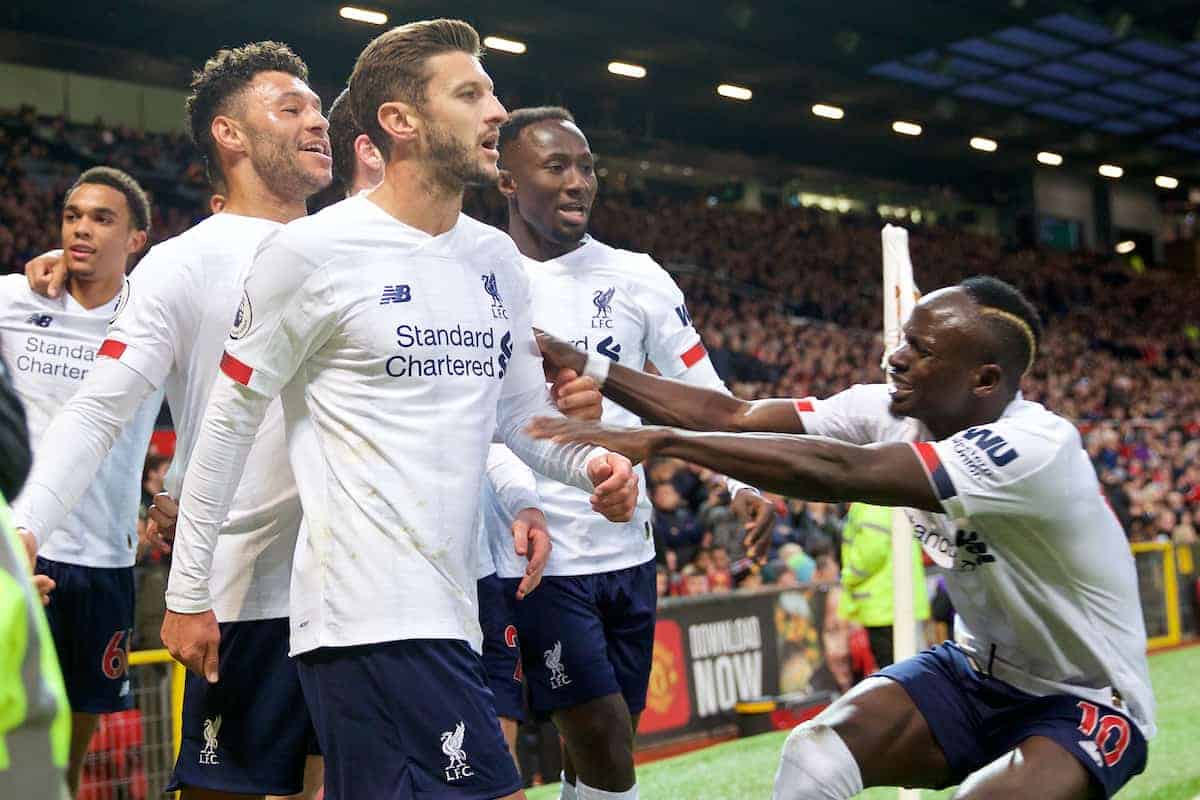 Adam Lallana salvaged a point for Liverpool, but the Reds’ performance was woeful at Old Trafford.

The Brazilian returned to the fold after a two-month injury absence – but, ironically, Liverpool dropped their first points of the season with him back.

He was relatively untested on the whole and could do nothing about Marcus Rashford’s opener.

Alexander-Arnold struggled to enjoy the same level of influence as he has for much of this season, like so many Reds players.

His final ball was too often inconsistent and he looked as though he could be got at defensively, especially in the opening 45 minutes.

He kept trying, though, and fired over late in the day, but he won’t remember the display with too much fondness.

The Premier League‘s Player of the Month for September, Matip fell short of his best level at Old Trafford.

One sloppy early pass set the tone and he was skinned by Rashford soon after, before losing him for his aforementioned goal.

He improved as the match wore on, mainly because United were sat so deep. 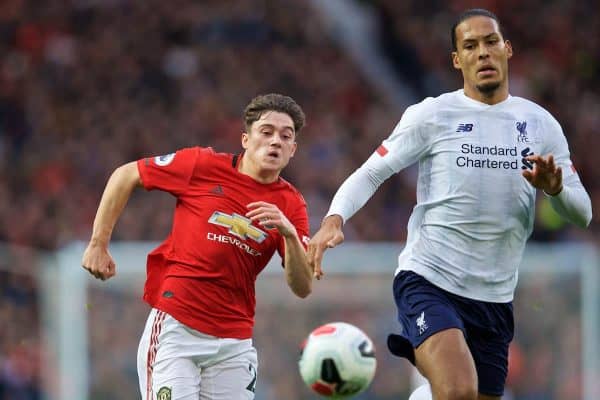 Once again marshalling the troops, Van Dijk was largely solid.

One unfortunate slip was a rare blip on an otherwise strong afternoon from the Dutchman – you just expect brilliance every week, so a good performance can feel like an average one by his standards.

The pace of Rashford and Daniel James forced him to turn on the afterburners a few times, showing just how fast he is.

Much like Alexander-Arnold, Robertson well well short of his best, particularly when it came to his end product.

Defensively, the Scot was more solid than his fellow full-back, though, and he crossed for Lallana to equalise late on.

Even when he struggles, he is still effective.

Fabinho has been one of Liverpool’s best players in 2019, but this was not a good day at the office.

His usual authority was often nowhere to be seen until late in the second half, whether it be his physicality or his purpose on the ball.

This was a really poor afternoon from the Liverpool captain, who is going through a sticky run of form at the minute.

Too often, there was no guile in his more attack-minded midfield role and he also looked out of place when shifted to the right-hand side.

When Henderson’s confidence drops it is clear, because his use of the ball becomes so much more safe and unimaginative. 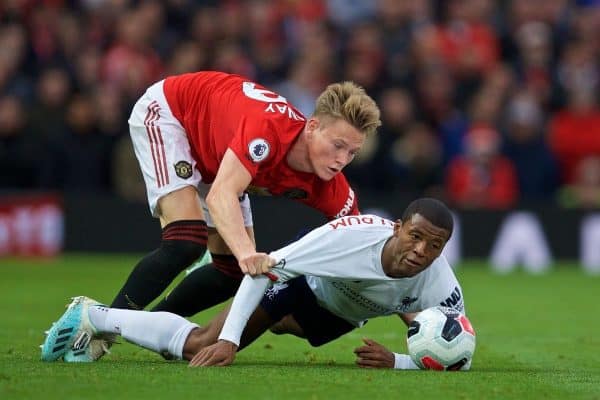 Gini Wijnaldum – 7 (Man of the Match)

On a day when so many Liverpool players were below par, Wijnaldum was the best of a bad bunch.

He looked like making things happen in middle of the park, with one jinking run and shot one of his most positive moments.

He quietened after the break, but it was hard to think of a bad thing he did at Old Trafford.

The Senegalese was nowhere near his best, putting in one of his least noticeable displays of the season.

He often looked strangely hesitant to take on the ageing Ashley Young, and when moved centrally in the second half he was equally quiet.

Mane had the ball in the net, but it was correctly ruled out by VAR for handball. 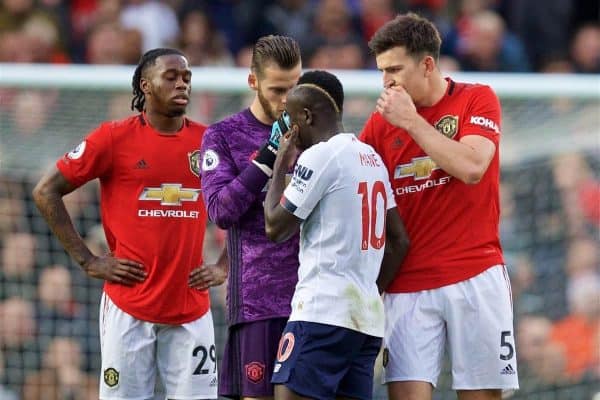 When Origi starts games his limitations are horribly exposed.

Brought in in place of the injured Mohamed Salah, the Belgian was like a square peg in a round hole, bringing no balance to Liverpool’s attack and blunting it.

Barring a couple of purposeful runs, he simply wasn’t good enough and was replaced by Alex Oxlade-Chamberlain shortly before the hour mark.

You could even argue that his overly dramatic reaction to the foul in the lead-up to the goal didn’t help.

This was Firmino’s worst outing of the season by a mile – such is his influence when he is bad so are Liverpool, and that proved to be the case against United.

His silky touch was almost nowhere to be seen and he seemed to be lacking his usual movement and work ethic.

Improved late on, producing a few nice touches, but he was often woeful.

The midfielder shot wide twice, including a good strike in stoppage time, and brought some impetus to the team.

Had a glorious late chance to play in Alexander-Arnold, however, but fluffed his lines infuriatingly.

There will have been plenty of groans when Lallana came on, but he scored the all-important equaliser and did well, on the whole.

His first goal since May 2017 – he picked a nice time to end the drought.

Like Oxlade-Chamberlain, Keita had some imagination in his game and he impressed, without being spectacular. 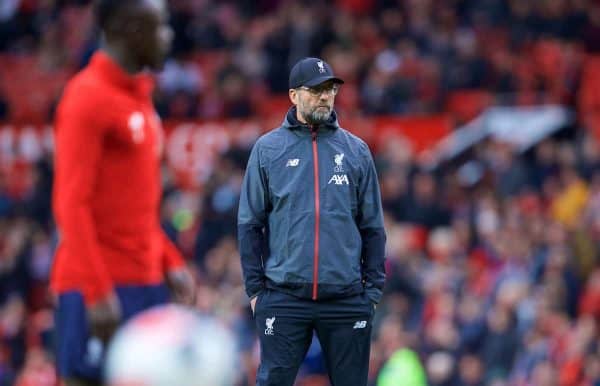 This was one of Liverpool’s worst performances for a long time, especially in the league. It was reminiscent of the Napoli away showing this season (and last).

There was little wrong with his team selection but he seemed to be out-thought by Ole Gunnar Solskjaer for much of the game with his players so limp in their efforts.

That being said, the German ensured his players dug deep and picked up a valuable point and all three of his substitutions were positive additions.