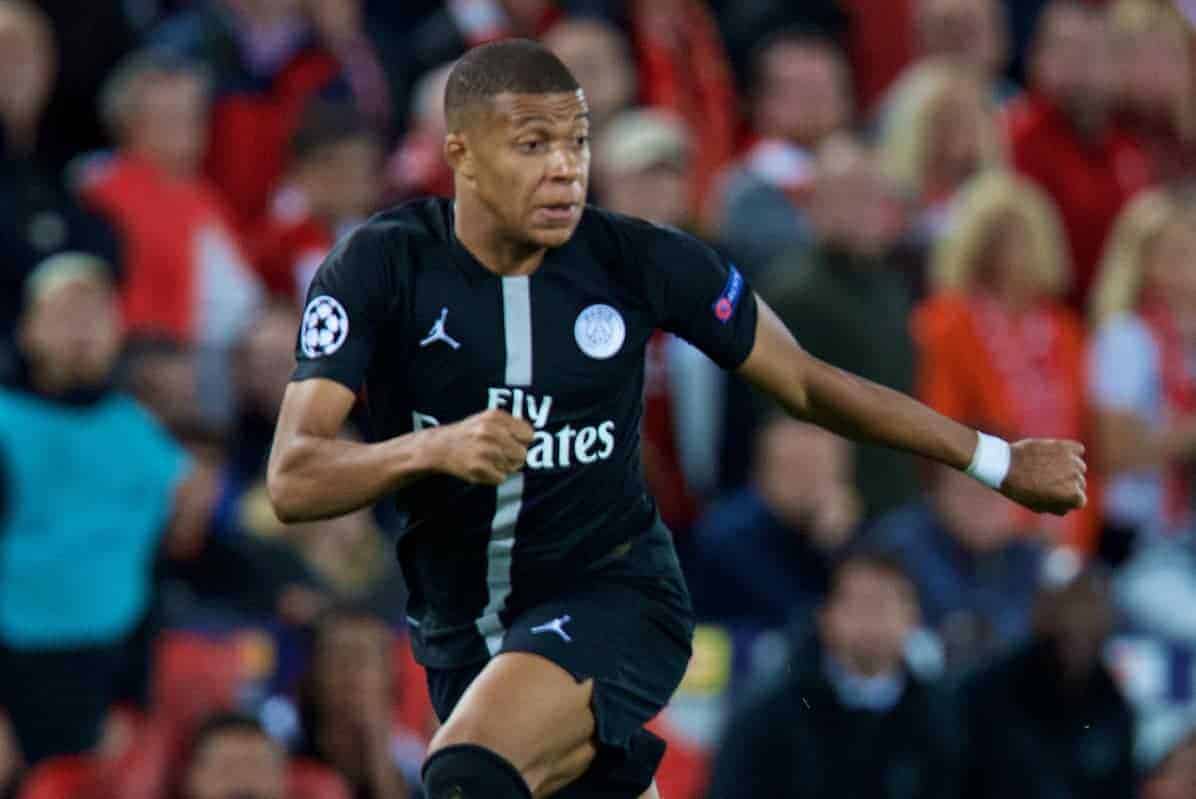 Liverpool’s success in their High Court case against New Balance has led to #Mbappe 2020 trending on Twitter, but where does this seeming interest stem from?

Kylian Mbappe is one of the world’s best players, who on Tuesday night came off the bench to score a hat-trick as PSG put five past Simon Mignolet‘s Club Brugge.

Unsurprisingly, the 20-year-old received widespread praise for his performance in Belgium, but that was not why his name became a Twitter trend in the UK on Friday.

#Mbappe2020 was included in over 9,000 tweets following the High Court ruling against New Balance and in favour of Liverpool—and, in turn, Nike.

The Reds are set to sign a long-term kit deal with the sports giant for the 2020/21 campaign onwards, with their significant distribution and marketing powers ensuring their offer was deemed unmatchable.

Liverpool’s links with Mbappe stem from long before talks with Nike, as in 2017, the club made an approach for the Frenchman ahead of his exit from Monaco.

Jurgen Klopp is believed to have spoken to Mbappe’s representatives, and an £87.8 million bid was even claimed to be rejected prior to the youngster’s £165.7 million loan-to-buy switch to PSG.

The manager has remained vocal in his praise of the versatile forward, and in May described him as a “good example for [the next] generation.”

“I saw Kylian Mbappe when he was 16, everybody knew: ‘Yeah, wow, that will be absolutely amazing’,” Klopp recalled.

It stands to reason that, were Mbappe to become available, Liverpool would certainly be interested—and deals for the likes of Alisson and Virgil van Dijk, along with big-money contracts for their key players—suggests the owners would be able to bankroll it.

This is particularly salient ahead of the club’s announcement of their partnership with Nike, with the proposed deal weighted heavily in terms of on-field success and merchandise sales.

Nike will reportedly pay Liverpool just £30 million per year as a flat rate, but they will also receive 20 percent of all net sales (five percent for footwear), plus further incentives for Premier League and Champions League trophies.

Their offer includes the promise of availability from at least 6,000 stores, while the likes of Drake, Serena Williams and Lebron James will be used in promotional campaigns.

James’ involvement is key, with the NBA icon a Liverpool fan and minority stakeholder in the club—having bought a two percent stake for $6.5 million in 2011.

Mbappe’s meeting with James in California in the summer led to the birth of the #Mbappe2020 hashtag, and supporters are clearly hoping their mutual respect, and the influence of Nike, could prompt a move.

My firsts day in USA ???? pic.twitter.com/b6pqlW8kHQ

The focus for Klopp will remain on building a successful squad of top-level talents and people of good character, but the Nike deal could lead to the pursuit of high-profile, marketable players who fit this remit.

Jadon Sancho is another candidate and, conveniently, both Mbappe and the Borussia Dortmund winger are sponsored by Nike.

It remains fanciful at this stage, but given the upward trajectory of Liverpool and Klopp’s endorsement of both players, it is not out of the realms of possibility that they emerge on the radar in the future.