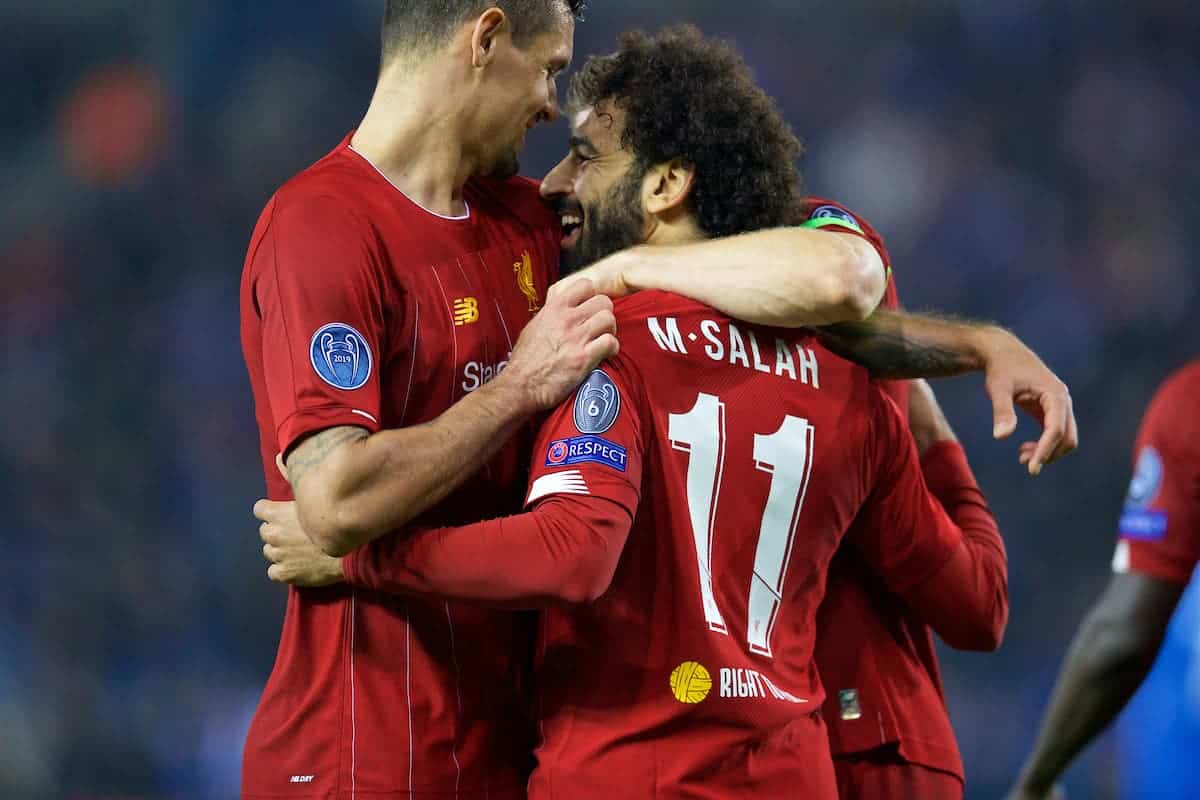 Liverpool secured a valuable 4-1 win on the road against Genk in the Champions League, and there was plenty of praise for the midfield.

The Reds travelled to Belgium for their third Champions League outing this season, searching for a valuable away win in the competition.

And Jurgen Klopp’s side wasted little time in moving a step closer to achieving their goal as Alex Oxlade-Chamberlain was on hand to notch his first goal since April 2018, with a drilled effort with less than two minutes on the clock.

He then doubled his tally in scintillating fashion in the second half after a stunning finish with the outside of his boot off the underside of the crossbar.

And Genk looked to pose questions to Liverpool’s defence throughout and they netted a late consolation goal through Stephen Odey, but not before both Sadio Mane and Mohamed Salah had extended the Reds’ lead to a four-goal buffer.

Oxlade-Chamberlain has his first brace for Liverpool. And what a goal.

Okay so Ox starts every league match till further notice thanks

“Goals from midfield is something we need to add more of, Gini and Milner get a few but Ox is that goal threat we can lack at times for sure.”

Rare you get such a sharp intake of breath, on mass, inside the press box – that finish from Alex Oxlade-Chamberlain drew praise from everyone. What an improvised strike..

Absolutely thrilled for Ox. The injury he suffered was horrific and I’m sure he doubted at some stage how his career would be affected. And so it is heart warming to see him back on the scoresheet and starting to thrive.

And the highly anticipated midfield trio of Fabinho, Keita & Ox received plaudits and showed off the options at Klopp’s disposal…

With this midfield. Liverpool have 9 genuine threats to score, or create a goal

Keita is effective on the ball as is Ox, it’s just getting that balance right. That takes time and minutes on the pitch, so for me it’s worth persevering with. We know what Henderson and Wijnaldum offer, it’s time for a change.

“Can’t imagine a midfield without Fabinho anymore. So integral and so brilliant, so difficult to go past him.”

Liverpool's last two games have shown they have now have incredible options in midfield – Lallana coming off the bench to score at Old Trafford; Ox doing his thing tonight at the same time Keita has played really well. The 'recognised three' have genuine competition

I hope that’s Keita in the starting XI for good now.

That wasn't even Liverpool at their best tonight and we still won 4-1. Fabinho, Keita and Oxlade-Chamberlain played as brilliantly as we were expecting them too in a midfield 3. I'd love to see that team play again against Tottenham with Trent and Matip back in! ? #GENLIV

Ox and Naby both showed they are ready for the midfield rotation. Milner was superb vs Leicester. Lallana good cameo at United.
It's not about specific players, it's about the best combo in any game.
As a wise man once said, you need a buzzer, a cruncher and a spreader… #lfc

Meanwhile, fans were of the view that the attack and defence had somewhat contrasting nights…

Strange but highly entertaining game. Brilliant in attack, ropey at the back. Would slot comfortably into a DVD of the 2013-14 season.

“Doesn’t really matter but we should be keeping more clean sheets.”

Think it's safe to say there will be at least one alteration to that midfield for Spurs, though, so:

Should Ox or Keita keep their place? Only one, so which…or neither?

Since the start of the 2017-18 season, Roberto Firmino has more assists in the Champions League than any other player (11).

He nearly had the best of all tonight. That pass to Mane ?????

Salah and Mane scoring and assisting each other. Name a better love story than that.

Firmino didn't have a shot today – yet was arguably our best attacker. He was fantastic.

Despite a mixed performance, there was delight all around as the Reds secured a valuable win on the road…

“Got the job done. Great hit by Ox.
Mane and Salah had spark!!
3 points and a crucial win.
Voted Milner for man of the match. Worth his weight in gold.”

Turned a potentially tricky one into a rout. Super stuff in second half although trying to watch on airplane WiFi is the only thing that’s slowed the team down. Delighted for Ox after all he has been through. Lots of players rested too. Very positive

Liverpool weren’t brilliant there, but there’s so many positives to take.

Minutes for Ox and Keita, who both impressed.

Salah back and scoring and assisting, if he wasn’t great.

Minutes for Gomez and a rest for Robertson.

Lack of clean sheet the only downer

Liverpool in a strong position in Group E now but, judged by Jurgen Klopp's actions on the touchline throughout and his reaction at the final whistle, there is significant room for improvement. Huge plus for Alex Oxlade-Chamberlain, his second goal deserved to win game on its own