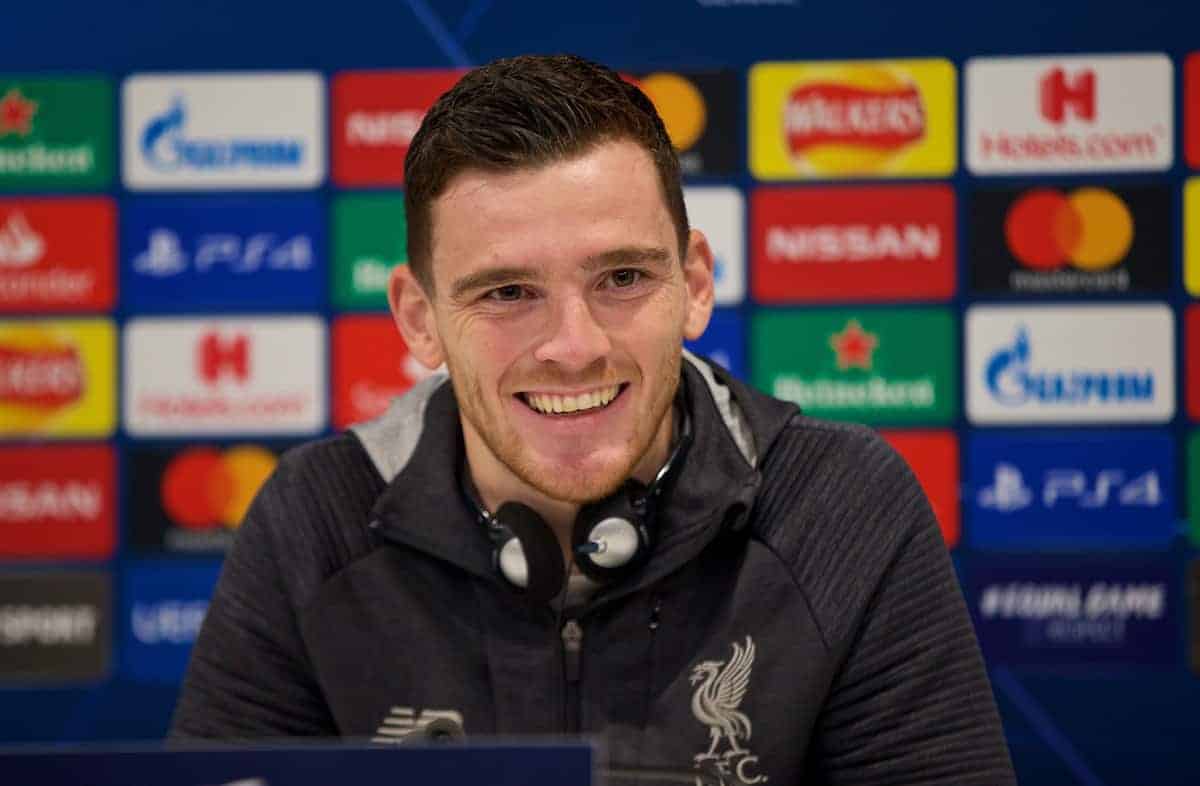 Andy Robertson has called for a return to clean sheets for Liverpool, and to avoid the last-minute scrambles that have defined their season so far.

The Reds have made a habit of fighting back to late victories this campaign, and it has served them well as they sit eight points clear at the top of the Premier League.

They are also within touching distance of the Champions League‘s last 16, with three points against Napoli on Wednesday night enough to secure progress as Group E winners.

But in all competitions so far this season, Liverpool have only kept three clean sheets: against Burnley and Sheffield United in the league, and away to MK Dons in the League Cup.

It is a far cry from the exploits of last term, which saw Alisson record 27 shutouts in 51 appearances, and speaking as part of the club’s pre-Napoli press conference Robertson acknowledged the need for more clean sheets.

“It’s a good question, and probably one we can’t quite put our finger on,” he said, when asked about the Reds’ poor defensive record.

“Some of the goals we’ve conceded have been of high quality, and some of them have been poor from us.

“So it’s important that we get back to clean sheets, because they’re the ones that we’re good at and it obviously lets the attackers go and do what they do.

“If you’re conceding in games you can’t always rely on scoring late, or coming from behind or whatever.

“So it would be nice to get back to clean sheets and we believe that we’re in a position that we can do that and hopefully that’s starting tomorrow night.”

There has been a wider suggestion that, despite Liverpool’s commanding position both domestically and in Europe, they are yet to hit top gear.

This serves as a warning sign to their opponents, but it is not a notion Robertson is “buying into,” though the left-back did admit he would prefer to avoid the nail-biting ends to games for the supporters’ sake.

“I’m not really buying into it, because we’ve found ways to win and we’ve been going right to the end, and we’ve been putting in special performances in different ways,” he continued.

“Some games, I thought against Man City and Tottenham, we’ve played unbelievable, but then against say Aston Villa and Crystal Palace we’ve had to dig deep.

“We didn’t play our best but we had to dig deep and find a way to win, so that’s what we’ve been so good at.

“In the Premier League we’ve got 37 points, so we can’t really moan about anything!

“But we’re a team that strives for perfection, and that’s not always possible but if we keep striving towards that then we’ll get there.

“If people are saying we haven’t hit our heights then hopefully that comes, because that will be nice when that happens.

“Hopefully, like we’ve touched on with clean sheets, it would be nice to get more of them and hopefully get a couple more comfortable wins, because the 90-minute winners aren’t doing anything [for the heart]!

“I’m sure the fans would love a game where they can just sit down for the last 10 minutes or whatever and enjoy it.

“But we’ve not quite managed to produce that in a while, so hopefully we can get back to doing that as well.

“Because we want them to come and enjoy it, not be biting their nails right up until the 93rd, 94th minute!”