Ben Woodburn is nearing his comeback for Oxford United after breaking his foot, and his time on the sidelines will “make him a better player.”

That is the view of Oxford United manager Karl Robinson who has provided Woodburn with a new lease of life at League One level.

Since breaking onto the scene in 2016 and beating Michael Owen’s record to become Liverpool’s youngest-ever goalscorer, Woodburn has since experienced a series of highs and lows.

The now 20-year-old has been sent on various loan spells which have failed to reap the intended rewards, that was until his summer switch to Oxford United.

Woodburn hit the ground running in League One and was a regular for Robinson as an attacking option through midfield, playing 13 games with a return of one goal and five assists before his progress was curtailed by a broken foot in October. 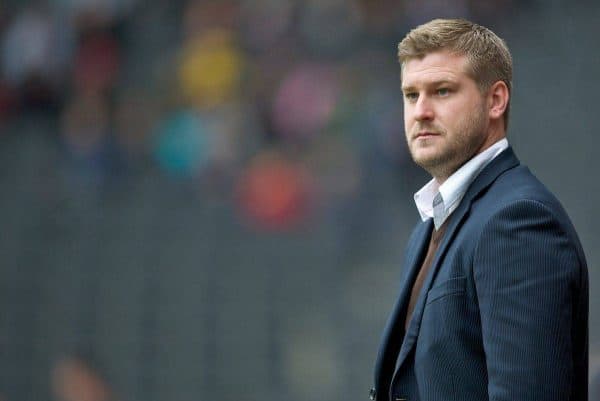 It was a cruel blow for the youngster who had finally established himself within a first-team environment, and while Robinson was incensed over the treatment he has received he was confident, when speaking to the Liverpool Echo, that Woodburn would become a “better player” after his prolonged period on the sidelines.

“When you look at this season he’s been really good, to the point he was one of the most fouled players in the league at one stage and took one tackle which ended up breaking his foot,” he said.

“Some people seem to think that’s okay that you can do that to young players but this injury will certainly make him a better player. Sometimes you have to deal with these situations to understand and respect the game a bit more.

“He was certainly getting treatment in our league that I felt wasn’t fair.

“I think he was a marked man because of his reputation but he’s coped with it so well and Liverpool should be extremely proud of him.”

Woodburn arrived at Oxford off the back of a spell with Sheffield United in the Championship where he made an early return to Liverpool after quickly finding himself on the periphery.

And Robinson, who worked with Woodburn in his early days at Liverpool’s academy, conceded the talented youngster needed his spirits to be picked up after a tumultuous year:

“He came to us on a real low this summer, after a difficult loan last year.

“I think that loan he went on was too soon. I think people forget how young he is. The Championship is so unforgiving it’s incredible.

“The style of play at that level is a little bit different to the Premier League, it’s more forceful in the way you get the ball through the thirds, certainly more aggressive out of possession.

“When he came in the summer he knew the players I’ve worked with and, weirdly, I had him when he eight years of age when I was a coach at Liverpool.

Moreover, while Oxford’s game against Ipswich Town was rearranged over the weekend due to the international break, Woodburn was back with Liverpool continuing his recovery.

The hope is he will make his competitive return for The U’s against MK Dons on December 14 before the League Cup meeting with Man City in the days following.

“Luckily enough, Richie Partridge [club physio], who I’ve known for many, many years is looking after him so I can keep in regular contact,” Robinson added.

“We’re hoping in two weeks, he can come back down and finish off his rehabilitation and then hopefully ready and raring to go for our MK Dons and Man City games!”