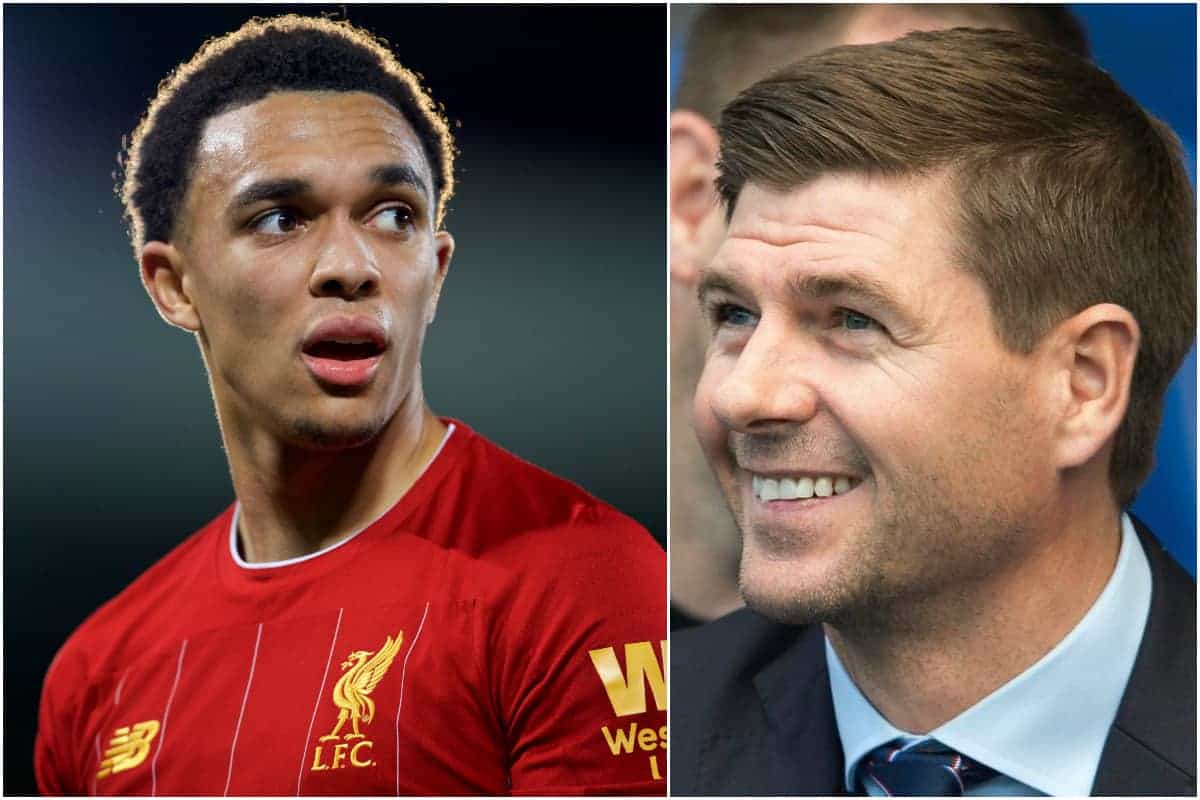 Alexander-Arnold’s debut for the first team came before Gerrard’s return to the club as a youth coach, but he had already caught the former captain’s eye.

Gerrard name-checked the right-back along with Herbie Kane in his 2015 autobiography as two players he ensured were with him for every session while he was working towards his UEFA B Licence.

While Kane is still working his way through the ranks and will likely settle further down the Football League ladder in the near future, Alexander-Arnold recently made his 100th appearance for Liverpool.

He is regularly praised for his attitude on and off the pitch, and Gerrard believes it was “more about character” for him as he progressed.

“I was lucky to have a few days around Trent during his academy days and he stood out,” Gerrard told the Liverpool Echo.

“Of course people always talk about his technique and the stuff they see, but I saw something in this kid that was more about character.

“So talent will get you to a certain place, but I seen that he had the fight, the desire and commitment and that is what will keep him there consistently throughout what will hopefully be a long career.

“The talent is so obvious but I saw something different in him and it was more to do with the character and that is the reason why he is where he is.”

Of course, “where he is” is first-choice right-back for the European champions and half of the best full-back partnership in world football; all at just 21.

Gerrard believes he and Andy Robertson are in the “world-class bracket,” and speaking on Alexander-Arnold in particular, the Rangers manager insisted he can “be whatever he wants to be.”

“It’s not a question of ‘how good can he be?’ because he is already there,” he continued.

“What we have in Trent and Robbo now, straight away, you would put them in the world-class bracket.

“They are up there with the best players in their position, worldwide. So there’s no point saying how good could they be because they are already there.

“The thing for Trent now is can he maintain that consistency for as long as he can? Because he can go on and be whatever he wants to be.”

It is still difficult to project where Alexander-Arnold’s future will take him, with many believing he will establish himself as a central midfielder in the future—but he could convincingly become the world’s best right-back.

Maintaining consistency is key, and though it is hard to imagine the No. 66 dropping off now, he will be well-served to retain his determined attitude if he is to follow in Gerrard’s footsteps as Liverpool captain.