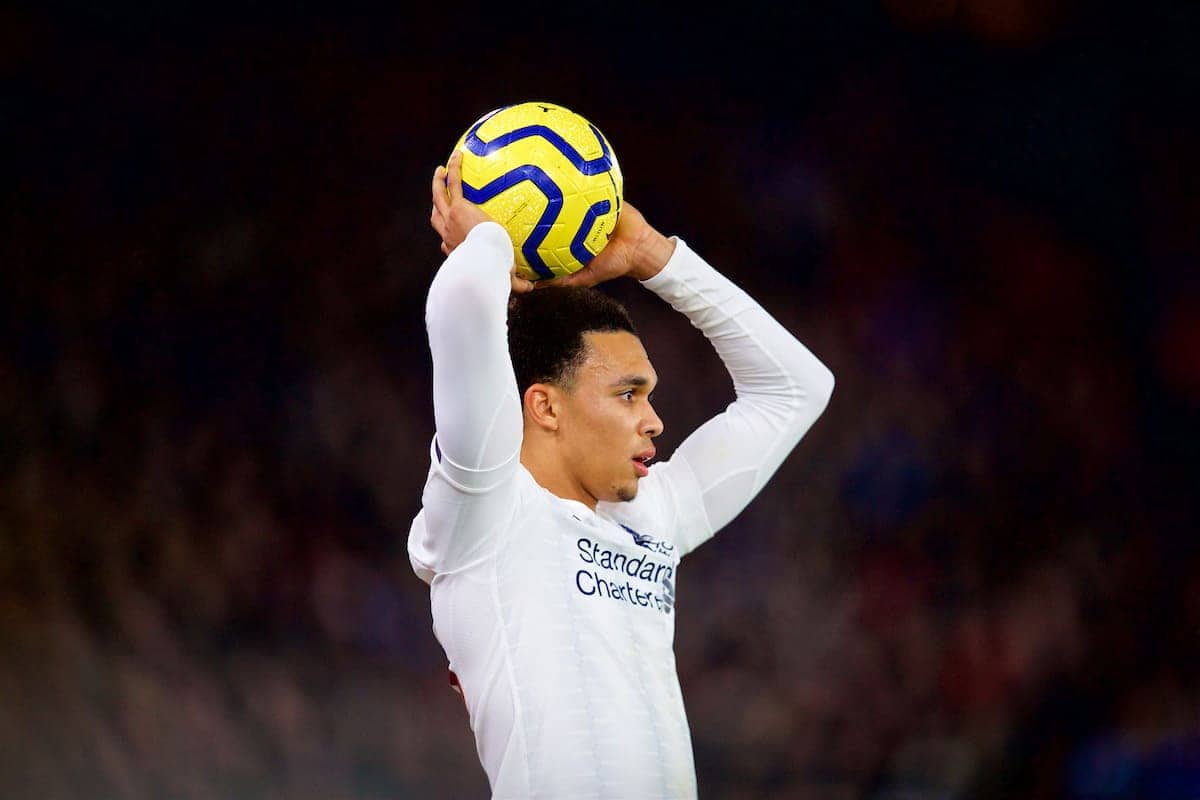 Jamie Carragher has highlighted a common issue for Trent Alexander-Arnold in tracking back, arguing it is a “very basic” problem he should address.

There is little disputing Alexander-Arnold is one of the best attacking full-backs in world football, with no player across Europe’s top five leagues creating more chances this season (46).

He is significantly outperforming himself creatively when compared to last season’s average per 90 in the Premier League (1.8), though so far he has registered four assists in all competitions to last term’s 16.

Regardless, the thrust that Alexander-Arnold provides Liverpool going forward has, at times, seem him caught out at the back, with Carragher noting this during Saturday’s 2-1 win over Crystal Palace.

It was a game that the Reds dominated from the opening stages but crumbled as the game wore on, and though there is clearly more than luck at play in the frequency of late goals this season, Roberto Firmino‘s winner was fortunate.

Speaking as part of Sky Sports’ Monday Night Football coverage this week, Carragher described Alexander-Arnold’s lack of urgency in tracking back as his “biggest problem.”

“Trent loses the ball, he’s in like a fight with Zaha and it’s tough,” he said of the buildup to Palace’s equaliser.

“But this is my biggest problem right now with Trent, you have to sprint back but he’s jogging.

“I think if he gets back quick enough, he actually gets goalside and maybe forces the Palace attacker to make a different pass.

“But because of that initial lack of panic, you’d usually have that panic to get back.

“I’ve seen it a lot now. I don’t know if it’s something that Jurgen Klopp mentioned or speaks to him about.

“There was a goal last year at Arsenal that we did on Monday Night Football which was exactly the same, Arsenal scored the goal and drew the game 1-1.

It is an interesting point for Carragher to make, as though the space Alexander-Arnold vacated in pushing forward was occupied by Dejan Lovren and James Milner, there was little effort from the 21-year-old to recover.

Whether this is part of Klopp’s tactical outlook—which places heavy emphasis of the full-backs to attack—is unclear, as Alexander-Arnold’s focus may have been on breaking to make it 2-0 if the ball was won.

As Carragher went on he acknowledged this “trade-off,” but also stressed it was an area of the No. 66’s game that can be improved as he develops.

“But what I’m saying is it’s not a trade-off where you say it’s OK to not be sprinting back and be better defensively.

“You want to keep what he’s got in terms of going forward because he’s the most creative player in Liverpool’s team, but he’s still got to improve on the other side of things.

“And I hope that message is still getting given to him on a daily basis by the staff. Just sprint back, it’s very basic.”

Carragher will be fully aware of the demands centre-backs should place on their full-backs, irrespective of their duties further forward, and it will have been an area he drilled into his own team-mates as a player.

There is clearly room for improvement for Alexander-Arnold in terms of defence, and if Carragher has spotted it, no doubt Klopp and his backroom staff will have too.