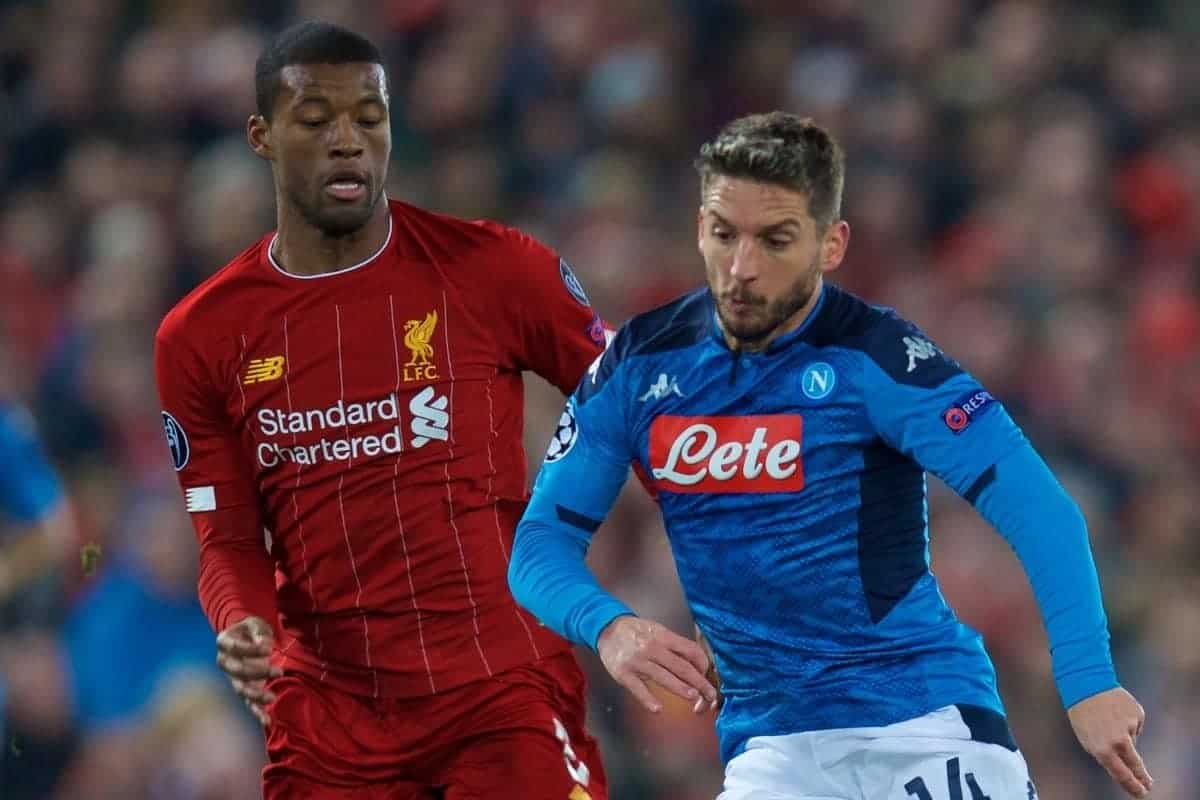 Liverpool could only draw 1-1 at home to Napoli on Wednesday night, but Champions League qualification is still in their hands.

The Reds knew that victory over the Serie A team would book their place in the last-16, but it didn’t pan out that way.

Liverpool were far from their best in the opening 45 minutes, with Dries Mertens’ well-taken strike the difference between the two sides.

Losing Fabinho to injury was a particular worry, while Virgil van Dijk going down in the lead-up to Mertens’ also caused alarm, prior to him carrying on.

Jurgen Klopp‘s men were much improved after the break, though, and Dejan Lovren powered home a header to equalise midway through the second half.

That’s the way the scoreline remained, meaning Liverpool just have to avoid defeat away to Salzburg to reach the next round.

Liverpool’s lethargic display worried some, while Napoli frustrated others…

That's a really disappointing result for #LFC, who now probably have to get something away at RB Salzburg during an already difficult December. Napoli looked to have blown themselves out but 70 minutes but not enough composure or quality shown to punish that.

Wish I could go back in time and not watch that game.

The most boring Liverpool game I’ve seen at Anfield in ages ?

“A poor match yet again, we’ll struggle against Brighton playing like this!” – Andreas Baglo Kjaer on Facebook.

“That was bad, why can’t we do it the easy way once, just once!” – waldaz on the forums.

Napoli are just the Italian Stoke. Can we never play them again

Disappointing performance tonight by #LFC with not enough movement, creativity and weirdly intensity. Front three largely anonymous. Second game in a row where LFC haven't been good. But, it has to be said, also a perfect defensive showing by Napoli.

That was old Liverpool. No answer to a parked bus.

If we never play Napoli again it will be it’ll be too soon. #Kryptonite

It's ok to love Klopp and think he is the best manager in the world but also say you think he got it wrong tonight. Doesn't happen often, but it happened tonight.

If Klopp wanted the Salzburg game to be a game where he could rest players he has a funny way of showing it. Poor midfield selection given he’d put Gomez RB.

Klopp has got this completely wrong tonight. He’s at fault tonight

“Sorry but I blame Jurgen for that performance tonight. Poor team selection.” – John Gardner on Facebook.

Klopp got the team wrong today

#LIVNAP #LFC well below par, didn’t like Klopp’s midfield selection – espeically when not starting Trent. Anfield quietest I can remember in a long time under the light; plus a dreadful referee. So it goes to final round, since when did we ever do things the easy way anyhow?

Klopp got it all wrong today. Gomez starting was poor and too late with the subs. Just disappointing

Liverpool won the champions league last season, they can get a result against Salzburg.

If you can’t get a draw in Salzburg then you don’t deserve to be in the CL knockouts. A home draw against Napoli isn’t exactly a disaster, especially when the performance was flat.

“We’ll have to finish off the job in Salzburg. As always, nothing will be easy for us.” – Hope in your heart on Facebook.

“A good chance lost to get a rest in December. Might have gambled here and put more effort in the first half for that rest in December, but will have to be at our A game now. Salzburg are a good attacking unit and it won’t be easy.” – Incognito on the forums.

Can we do it the easy way for once, lads? @LFC

That Salzburg tie is already giving me nightmares.

Frustrating night, but still top of the group. Referee poor to say the least! Fabinho injury a blow but suspended for Saturday anyway.

Frustrating night, but still top of the group. Referee poor to say the least! Fabinho injury a blow but suspended for Saturday anyway.

One of the most irritating things in football is referees not adding on any additional stoppage time when there's a lengthy stoppage in stoppage time.