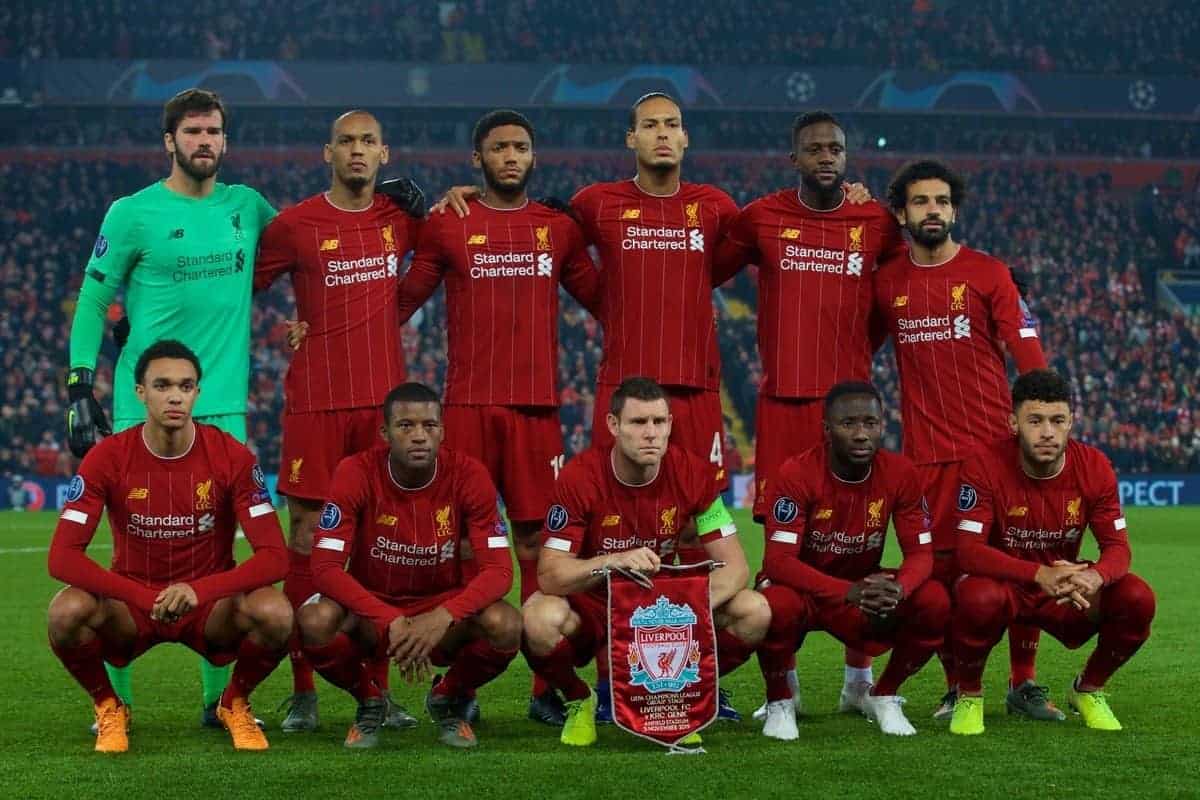 Before the game Alisson expressed his annoyance at the concession of “stupid goals,” and his defence provided another example as Mbwana Samatta powered a free header beyond him for 1-1.

Like at Aston Villa at the weekend, it was another game where he was barely called into meaningful action bar a good save in the 81st minute; no doubt a tougher test awaits on Sunday.

Trent is in the midst a brilliant string of performances and this was no different.

He made a vital block to stop a rare Genk attack in the first half, along with more decisive tackles nearer the halfway line, and was a key outlet driving forward on the right.

No Liverpool player made more tackles (three) or interceptions (three) than the 21-year-old.

Given a rare opportunity as Jurgen Klopp rested Dejan Lovren for the visit of Man City, Gomez was arguably the most defensively lax as complacency seemed to set in during the first half.

The issue he will find is building rhythm, and Klopp appears unwilling to hand him a starting shirt in the big games.

Looking closer to his all-conquering best after a prolonged run of form that was slightly below his exceptional standards, Van Dijk dominated at the back.

A clear candidate for Man of the Match, hopefully building up to a star turn against City.

Milner’s abilities at full-back can be filed under ‘serviceable’ rather than ‘adept’, and that showed at times in a performance that was steady over spectacular.

Created more chances (five) than any other player from left-back, however, before moving into midfield to provide the energy when Naby Keita had been brought off.

Started slowly with some sloppy passes but soon settled into his usual routine of breaking up dangerous moves, plugging gaps and launching progressive moves from deep.

Wasn’t at his best, but even on a quiet night Fabinho is class.

Needing a strong performance after another setback, Keita buzzed about as a key threat for the Reds but struggled to make his mark despite some useful openings.

Still searching for that landmark post-injury performance that will put him firmly into contention—like Alex Oxlade-Chamberlain has managed.

Kept plugging away as the link man, picking up loose balls, recycling possession well and supporting Fabinho in a crowded midfield against Genk’s 3-4-3.

Finished well from a difficult angle for the opener: his second goal of the season for his club.

Klopp seemed to acknowledge his ease against the Belgian champions as the 26-year-old occupied a variety of roles impressively throughout, beginning up front, dropping into midfield and then out wide.

There is now a case to suggest Oxlade-Chamberlain should also start against another side he has enjoyed considerable success against: Man City.

Genk academy product against his boyhood club, Origi was clearly desperate to get his name on the scoresheet, but toiled in front of goal and missed a glaring opportunity in the first half.

Yet to convince he can be a regular option from the start, but with Xherdan Shaqiri out he’s the go-to.

Interestingly retained as Sadio Mane and Roberto Firmino were rested, given his ongoing ankle problems, but Klopp may be playing his way back into full fitness.

Unfortunately, though he was involved in some bright moves, the Egyptian had another off day in front of goal, squandering chances that he would typically put away.

Made the surprise call to start Salah and, even more surprising, keep him on the pitch for the full 90 minutes while bringing both Mane and Firmino on, but no doubt there’s a plan in place.

Rotated well with his starting lineup and then preserved the ever-improving Oxlade-Chamberlain as he works his way back to sharpness, reaping the rewards with another goal.

It was a professional night from the Reds that—bar a scare with Samatta’s goal—barely saw them move out of third gear and, despite that, they are now in a commanding position in Group E.