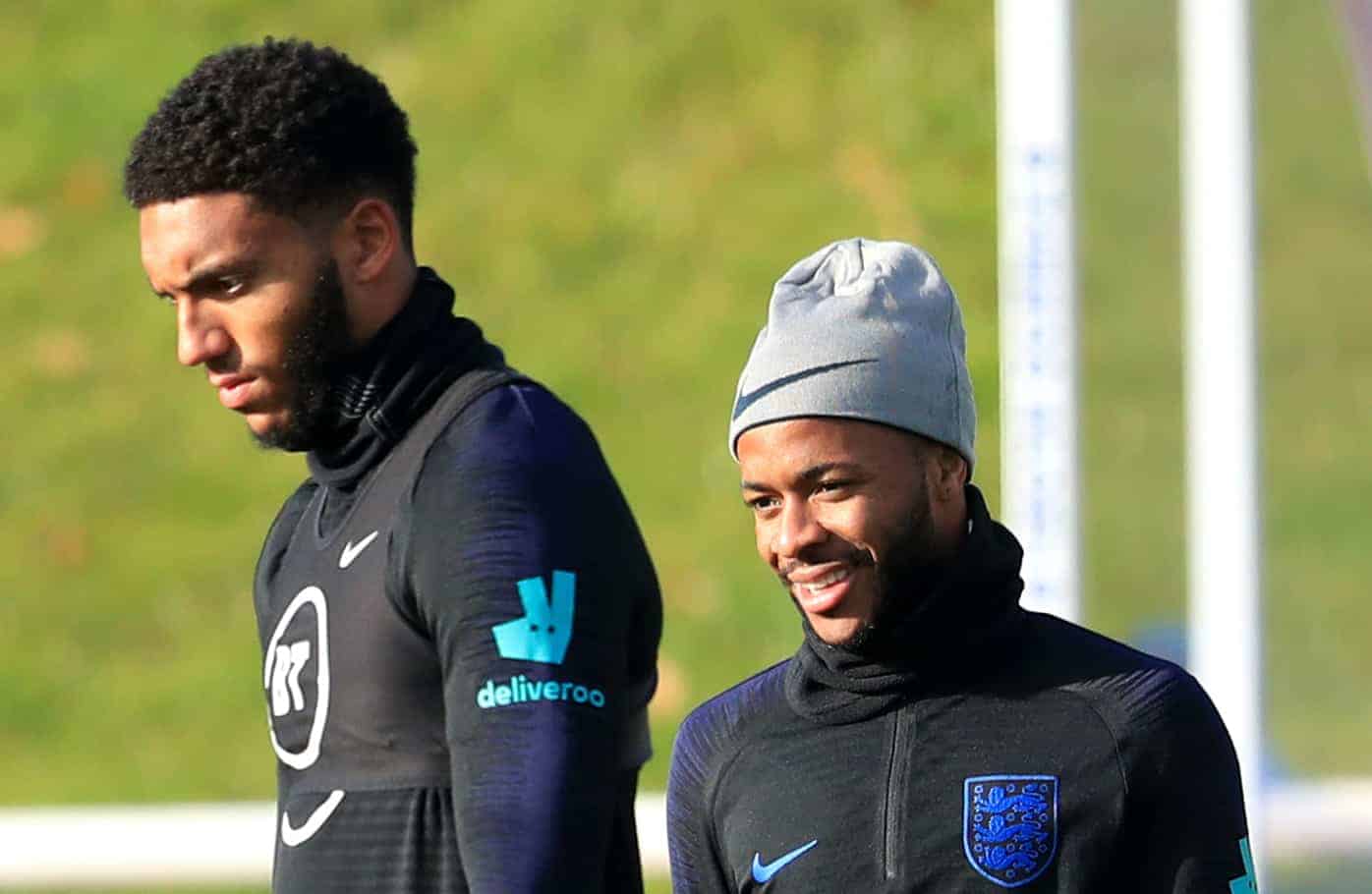 Aaron Cutler looks back on a difficult week for Joe Gomez and asks whether the boos he heard at Wembley were more to do with his club side than Raheem Sterling.

It’s certainly been an eventful couple of weeks for Joe Gomez. Having helped Liverpool bludgeon Manchester City in a breathless and tempestuous clash at Anfield the defender – much like his team – was riding high. Unbeknownst to him he was set for a horrible low.

International breaks are dull affairs akin to lost weekends. Even the English press pack struggle to create much in the way of hype before a clash with the mighty Montenegro. How many puff pieces can Henry Winter be expected to write about poster boy Harry Kane?

They were surely salivating then at the fallout from our most recent victory. Pep Guardiola’s meltdown combined with another wave of VAR controversy promised to provide column inches for a good three or four days. Enough until Harry The Brave bagged another hat-trick.

As they prepared to stagger such articles they were handed a gift from the journalistic God’s, albeit the kind that tends to befall the national side with strange regularity.

What transpired in the England canteen last Monday has been debated and dissected to death. No number of Manchester leaning writers nor crisis management campaigns can spin the fact a professional footballer attacked a teammate. An unsuspecting teammate at that.

Joe Gomez was guilty purely of besting his opponent the previous afternoon. That Raheem Sterling could not handle this fact says more about him as an individual and suggests more millions may need to be ploughed into that carefully orchestrated ‘brand’ of his.

Having been an unwilling participant in a media storm things were about to get a lot worse for our Joe. This next episode though was far more predictable…

Once named as a substitute for the Montenegro cakewalk, Gomez was always set to run the gauntlet. It, of course, makes no sense that the innocent party would be held up as a villain until you consider the elephant in the room. Or rather the Liver Bird.

That Gomez was introduced to a smattering of boos came as no surprise. Indeed it was inevitable; he is, after all, a Liverpool player. The preceding drama presented an opportunity for a handful of mindless idiots to chastise a lad playing for the supposed ‘Unbearables’. To hell with reason or justification.

The unsavoury incident is just the latest in a long line widening the chasm between our city and its national team. So how has it comes to this?

A quick history lesson will tell you Liverpool has historically been a town of immigrants, one welcoming of all comers. To this day it boasts the oldest African and Chinese communities in Europe.

Said movement was a result of its port, which attracted people from all corners of the globe throughout the 18th and 19th centuries in particular. This influx in itself was not exactly controversial.

It was only when huge swathes of Irish made their way to the city in the wake of the potato famine that (battle) lines were drawn. Despite being part of the British Empire themselves back then the Irish were wrongly viewed as second class citizens by those closer to the capital.

Having taken them in, Liverpudlians were quickly tarnished with the same brush.

This was perhaps the first sign of a culture clash destined to endure.

Come the 1960s and Beatle mania, Liverpool was outward-looking and proud, quick on the uptake when it came to continental customs. This sense of globalisation was only fuelled by the success of its leading football team. European jaunts resulted in scousers returning with new styles of clothing and footwear alike; along with some legendary tales.

These trends were alien to the rest of England and as such set Merseyside apart as being… different.

The arrival of Bill Shankly had already fostered an ‘us and them’ undercurrent by this point.

The Scot was a firm believer in socialism and the sense of community, with people banding together to make the best of things. A demigod, Shankly’s beliefs were upheld in Liverpool but deemed archaic in other parts of the country. The rise in the Conservative party and with it Thatcherism proved as much.

Already sensing they were marooned and cut-off from the moneymen down south, Liverpool’s worst fears were realised under the so-called Iron Lady. In the wake of the Toxteth Riots, the Conservative leader suggested a period of ‘managed decline’, as dictated in a cabinet memo.

In short, Liverpool was left to rot, its finance cut in the hope residents would up sticks and start anew. The fighting spirit for which the city is revered, however, duly kicked in and an illegal budget was laid out by the city council in 1985, one spearheaded by the relentless Derek Hatton. All this is and more is brilliantly documented in BT Sport’s Two Tribes film.

The aftermath of the Hillsborough Disaster tragically added to the sense of distrust.

Fast forward to 2019 and the current Tory Prime Minister has been guilty of pedalling those same untruths. Having been urged to apologise for historic but heinous remarks by Liverpool MP Maria Eagle, Johnson shamefully refused as recently as August.

Having been cast aside by its own government for so long Liverpool was revitalised not by Westminster but the European Union. New life was breathed into the region in conjunction with it being named Capital of Culture in 2008. The picturesque strand, the sprawling John Lennon airport and the modern Echo Arena are each the result of EU funding.

Is it any wonder then that Liverpool voted overwhelmingly to remain, in contrast to some pretty major cities? Salford among them. 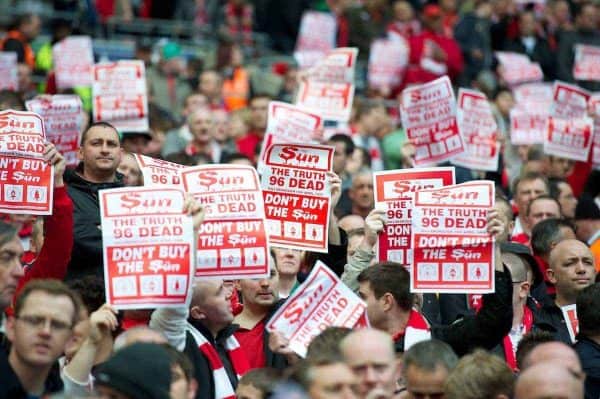 Oh but there’s more. A distrust come dislike of the Royal Family gets many backs up, something made all the stranger in the wake of recent revelations. Then there’s the terraces.

While a degree of ridicule is par for the course footballing banter takes on a decidedly sinister tone when directed at Liverpool supporters. Taunts about unemployment are in bad taste yet still bellowed proudly by nearly all fan bases, including Middlesbrough’s – whose own economy is in a far worse state. Nothing like a sense of irony.

Every Christmas time we’re subjected to ‘Feed The Scousers’ while ‘You Stole My Stereo’ is a year-long drone. All, of course, are stereotypes pedalled by the likes of Harry Enfield and Friends and lapped up by Little Englanders who care not for accuracy.

By far and away the worst chant is that which suggests we are quick to paint ourselves as victims. This ‘song’ is as rife as it is indefensible and shames many a club.

There is even debate surrounding knighthoods. As deserving of the honour as Matt Busby and Alex Ferguson clearly are why were Shankly and Bob Paisley overlooked? Kenny Dalglish meanwhile was only recognised in 2017 despite decades of sporting success and charitable work. Perhaps Her Majesty has favourites.

Given the long-running acrimony, it should come as no surprise to hear national pride is somewhat lacking in Liverpool. Many who saw beyond the politics and got behind the England team were disillusioned at the sight and sound of John Barnes being booed in the 1980s. Indeed Gomez isn’t the first.

This has led to conflicting views to put it lightly. Michael Owen went from Liverpool youngster to national treasure almost overnight following his spectacular goal at the 1998 World Cup.

While many fan bases may have felt huge pride at his achievement ours simply shrugged. It could even be argued Owen’s England achievements hindered his relationship with The Kop who reserved their affection for local hero Robbie Fowler.

When Jamie Carragher confessed he hurt far more in the wake of a club defeat than a national equivalent he was roundly criticised by everyone it seemed but us, who shared that same sentiment.

And so it continues. Whenever Liverpool appear in a domestic cup final, sections of our support will boo the national anthem; as is their right. Still it sparks genuine and faux outrage alike from the rest of the country while patriotic writers foam at the mouth.

But why should Liverpudlians, who are accused of being victims, or worse still murderers, join arm-in-arm with those same people spitting such vitriol, and celebrate a Monarch they feel no connection towards?

The likelihood is Gomez won’t be the last Liverpool player booed by the England support as we dissociate ourselves with them and vice-versa.

Those who like to separate politics from football are well within their rights to do so. Sadly that’s becoming harder, particularly for the most ardent Reds supporters. To emotionally invest in our football club is to do likewise in the city, one that is increasingly at odds with the country’s narrative.

The fact is Brexit and the political rhetoric surrounding it has given rise to a nationalist outlook that could not be further removed from this one corner of the country.

Add a boss football team into the mix and you light the touch paper. How does the saying go? We’re top and they don’t like it?

Gomez is said to be devastated at the events of this past week but should not take them personally. He simply got caught in the crossfire of a far bigger issue bubbling under the surface.

Back at Melwood he can hopefully begin to put a tough year behind him and force his way back into a team of which he was a vital component up until Christmas.

He and we can all take comfort in the fact there’s no international football until March.