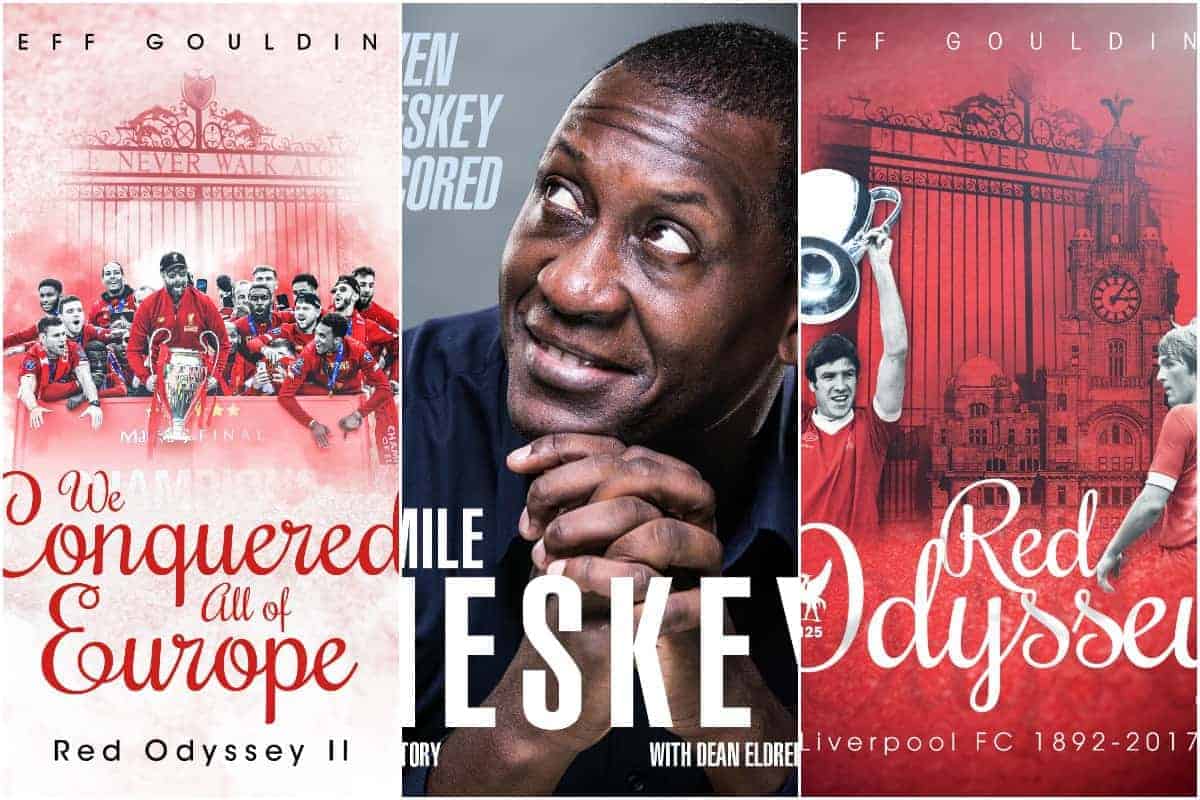 With the holiday season fast approaching, we asked leading independent sports publishers Pitch to recommend five nostalgic books that every Liverpool fan would want to find under their tree this Christmas.

The number of high-quality reads for Liverpool supporters is only growing, with autobiographies and history books providing entertaining and emotional recollections of the Reds’ decorated past. Are the glory days at Anfield back again and here to stay?

Whether you’re looking for Liverpool FC books as gifts this Christmas, or just one for yourself to read by the fire, we asked Pitch to select five must-reads to send you down memory lane…

1. We Conquered All Of Europe

This Is Anfield’s very own Jeff Goulding is first up on the list with his journey through the eyes of supporters, charting the re-emergence of Liverpool FC as one of European football’s most feared teams under Jurgen Klopp.

Read our full review of We Conquered All of Europe here.

We Conquered All Of Europe is available from Pitch here.

Emile Heskey made 223 appearances for Liverpool following his long-awaited £11 million move from Leicester City in March 2000, overcoming fierce criticism to score 60 goals and win four trophies with the Reds. In Even Heskey Scored, the now 41-year-old opens up about a fascinating career for club and country.

Even Heskey Scored is available from Pitch here.

Another title from our resident columnist Jeff Goulding explores Liverpool Football Club’s first 125 years of history. From the foundations of the first “team of Macs” to glorious and pulsating Anfield European nights, this series of heartfelt love letters to the Reds and the people of Liverpool is both euphoric and poignant.

Wingin’ It is the ultimate story of hope over hate. Due to the colour of his skin, Mark Walters always felt he needed to be twice as good as other players in order to succeed. A precocious talent, Mark fulfilled his potential by flaunting his dazzling ball skills for Aston Villa, Rangers and Liverpool – and by pulling on the white shirt of England.

Wingin It is available from Pitch here.

Every supporter has a special place in their heart for an extraordinary player who wasn’t necessarily the greatest of footballers (though many an argument has been and will still be had). This book profiles a unique brotherhood of mavericks and stalwarts, local lads and big signings. Includes Elisha Scott, Billy Liddell and Joey Jones, Craig Johnston, Jamie Carragher and Luis Suarez.

Pitch have kindly given us a copy of each of the books they’ve recommended above to give away in a competition to one lucky This Is Anfield reader. Click here to enter (it’s free!).