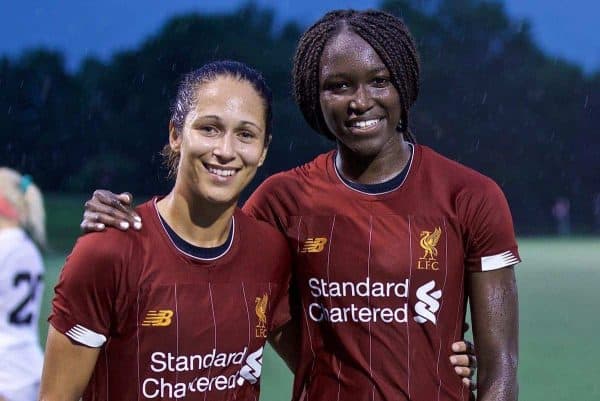 Liverpool striker Courtney Sweetman-Kirk will fulfil a childhood dream when she runs out at Anfield on Sunday.

As a youngster in girl’s football she admits playing at such grounds was never “on the horizon” but the growth in the women’s game has made it a reality.

Now she hopes to do the event justice and would love nothing more than to recreate her favourite moment at the stadium—Mohamed Salah’s goal against Chelsea last season—and score in front of the Kop.

“It’s massive. As a kid growing up you dream about it and want to play in big stadiums,” she told the PA news agency ahead of the clash against Everton.

“For women’s football it wasn’t something that was always on the horizon or possible but because of the integration of the club and the women’s game going forward thankfully it is something we can do.

“It’s going to be a massive occasion. We’ve had Stamford Bridge and the Etihad get big crowds [this season] so hopefully we can match that.

“The Merseyside derby is obviously huge for the club and it’s a big step forward in terms of the women’s integration as well.

“I come to a lot of games here to watch the men and it is a ground with an absolutely electric atmosphere that it is renowned for.

“I remember Mo Salah’s goal against Chelsea: cut in, top bin, and the crowd went mad. That’s probably one of my best memories of last season.”

Sweetman-Kirk is in the rare position of having played for both Merseyside clubs, having been top scorer for Everton Women before her move to Liverpool in 2018.

She was then the Reds’ leading scorer in her maiden campaign with a nomination for the WSL Goal of the Season for her strike against Reading.

Sweetman-Kirk has yet to get off the mark in seven appearances this season but that reflects a poor start by the team, who are bottom of the table with just one point from their opening five WSL matches.

“For us we are concentrating on our process and our performance and we know if we keep getting that right the fine margins will turn our way and we will get the results on the board.

“[A derby] could definitely be a huge catalyst. The great things with derbies is the cliche that form goes out of the window so fingers crossed we can get the three points.”