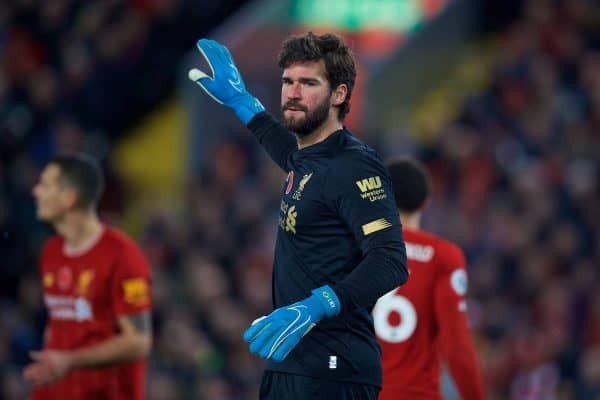 Liverpool have two outstanding young goalkeepers in Vitezslav Jaros and Jakub Ojrzynski, and Alisson has been lauded for his role in their progress.

The Reds are certainly well-stocked in terms of talent between the sticks, with Alisson‘s role as No. 1 backed up by Adrian and Caoimhin Kelleher at first-team level.

Kamil Grabara is developing well on loan at Huddersfield Town, while in the academy, Ojrzynski and Ben Winterbottom have caught the eye with their performances across the age groups.

Jaros is currently sidelined with an elbow injury sustained during pre-season, with his return pencilled in for the end of the year, but his potential cannot be overlooked.

Speaking on LFCTV‘s The Academy show, goalkeeping coach Mark Morris described this as a “different sort of scenario for Vit,” and highlighted a similar injury for Shamal George in 2016 which arguably derailed his rise.

But Morris believes it is “just a setback,” and with the club “really pleased with the way he was developing” the 18-year-old Czech can benefit from being “mentally strong.”

“Because you see all the boys going on the pitch, it’s quite hard because you know you’re not going to be out there for a couple of months.

“I try to get through all my exercises and try to keep my head up.”

The teenager acknowledged the difficulty in adjustment on his arrival at the club from Slavia Prague in 2017 due to the language barrier, but now speaking in a strong Scouse accent he has clearly settled.

It is a similar situation for Ojrzynski, who has taken over a first-choice goalkeeper for the under-18s and received praise from Morris for how he has adapted.

“Kuba, he’s making good progress. He’s a good character, we like him,” the coach said.

“He’s fitted in really, really well with the boys, the boys like him.”

Ojrzynski, a boyhood Red, described his move from Legia Warsaw in his native Poland last summer as a “dream come true,” but admitted the “tempo in training and the intensity” were obstacles to begin with.

The 16-year-old travelled with the first team for the pre-season tour of the United States, but was already familiar with many of them, with Morris telling the story of how he trained alongside the senior squad while still on trial:

“When he first came on trial I was actually helping John [Achterberg] out at Melwood, and he came in and ended up training with the first team one afternoon.

“He was out on the training pitch last, he had the likes of Mo and people like that taking free-kicks against him.

“The boy was only in on trial, it does take a certain type to come into a club like Liverpool and to be able to handle that, because the spotlight is on you constantly.

“You are judged on an hourly basis, and not just on the pitch, you’re judged in the gym.

“It’s your job, you have to be completely and utterly dedicated and the boys are, they really are. Those two are fantastic.”

Both Jaros and Ojrzynski attested to the effect of training with Alisson, with the former praising him as “the best goalkeeper in the world,” explaining that there are “loads of things to learn from him just by watching.”

“As do John and Jack [Robinson], obviously, working with them.

“They both get a good chance to go up there, they wouldn’t be there if they didn’t deserve to be up there.”

That is the crucial line when assessing Jaros and Ojrzynski’s hopes, as though many promising goalkeepers have come and gone in recent years, there is a clear pathway for them to get opportunities like Kelleher before them.

For Jaros, the focus is on returning from injury and re-establishing himself in first-team training, while Ojrzynski will be aiming to continue his impressive early form and catch the eye.

“You never stop learning as a goalkeeper, they don’t mature until they’re 28, 29.

“You’ve got to have an even keel in there and the temperament has to be right. It is a slow process with them, but they’re both ticking along nicely.”