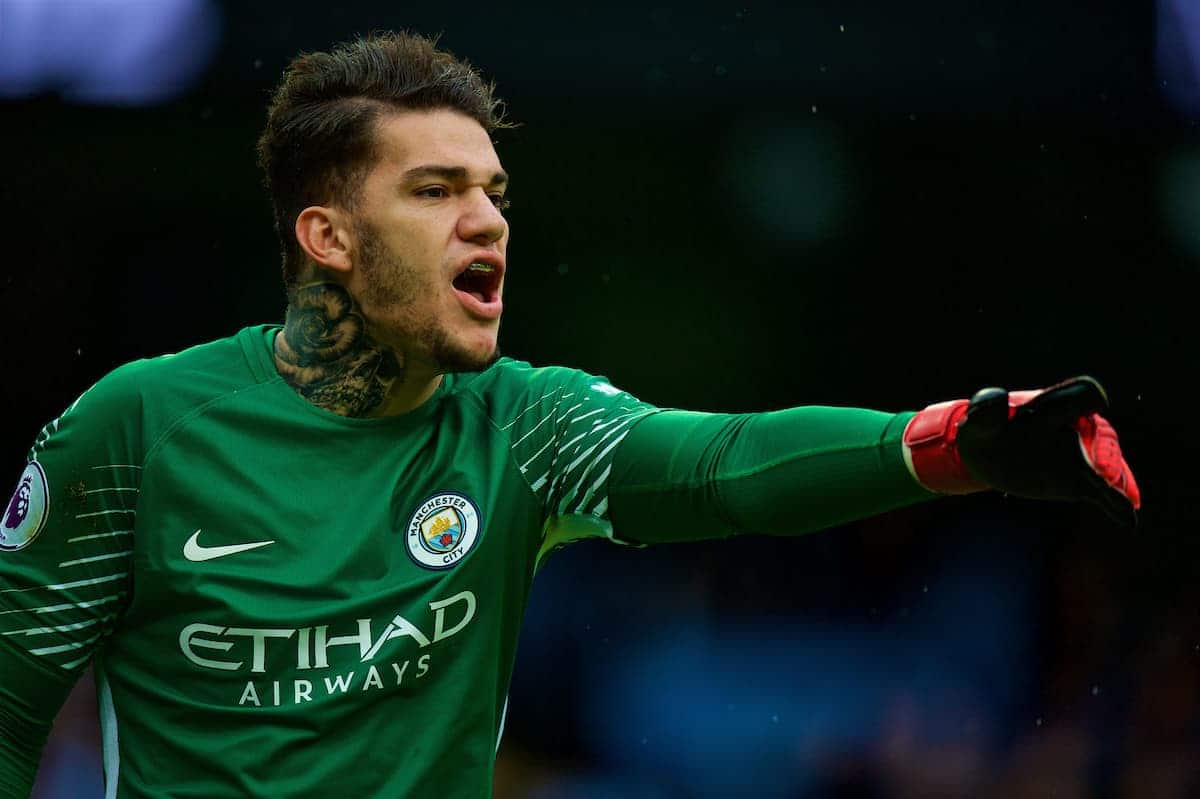 Pep Guardiola has ruled Ederson out for Man City‘s trip to take on Liverpool this Sunday, though Jurgen Klopp will be wary of familiar mind games.

The Brazilian was forced off the field in City’s 1-1 draw with Atalanta in the Champions League in midweek, with his replacement, Claudio Bravo, then shown a red card.

Kyle Walker finished the game between the sticks, and according to Guardiola, Bravo will start this weekend with his first choice unavailable.

“He’s not able to play. I don’t know [how long he will be out], Sunday he cannot play,” he said of Ederson.

“We have another top ‘keeper. Claudio Bravo can do [the same job as Ederson] too.

“We won the Carabao Cup thanks to Claudio. He’s an exceptional ‘keeper, [who has played] a lot of games with Chile, so no doubts.”

City will undoubtedly be weakened if Ederson is unable to play, with the 26-year-old’s ability in possession giving them a different edge, but despite Guardiola’s comments there is no guarantee he won’t start.

This is a situation Klopp addressed in the buildup to the clash with Man United last month, with David de Gea among those supposedly unable to feature due to an injury of his own.

“Four days ago I think Ole said ‘no chance’ for De Gea and Pogba, today it’s a ‘maybe’, tomorrow it’s a ‘100 percent’, Martial will back, all that stuff,” he said ahead of that game.

“That’s how all these games are played. No problem with that.”

De Gea started at Old Trafford, which will have come as little surprise to Klopp, who has become accustomed to mind games from opposing managers during his time on Merseyside.

Guardiola is certainly no different—arguably he is one of the most prominent purveyors—and therefore Liverpool cannot plan for Sunday’s game without factoring in the possibility of Ederson featuring.

But regardless, the Spaniard emphasised his faith in Bravo despite replacing him with his current No. 1 two years ago and him barely playing in the league or Europe since.

“I would not like to be a football player if my manager doubted me,” he said.

“I see him every day in training sessions, and how good a ‘keeper he is.

“We are not going to lose [due to] Claudio, the red card [against] Atalanta was because we lost the ball in a dangerous position.

“You have to respect this guy, he’s had his whole career at the top, an incredible level.

“He’s an incredible, top, top ‘keeper, and the first season when he was struggling a little bit in a new league, in the Premier League, it was because the team was not at the top level and no good.

“The problem was not Claudio’s, it’s easy to point and say ‘this is the problem’.

“It’s a group, it’s a team, sometimes he’ll make the save, sometimes not; same with Ederson. But why should I not have confidence with one player in my team?”

Bravo has, of course, already played against Liverpool this season, saving Gini Wijnaldum‘s penalty to ensure victory in the Community Shield in August.