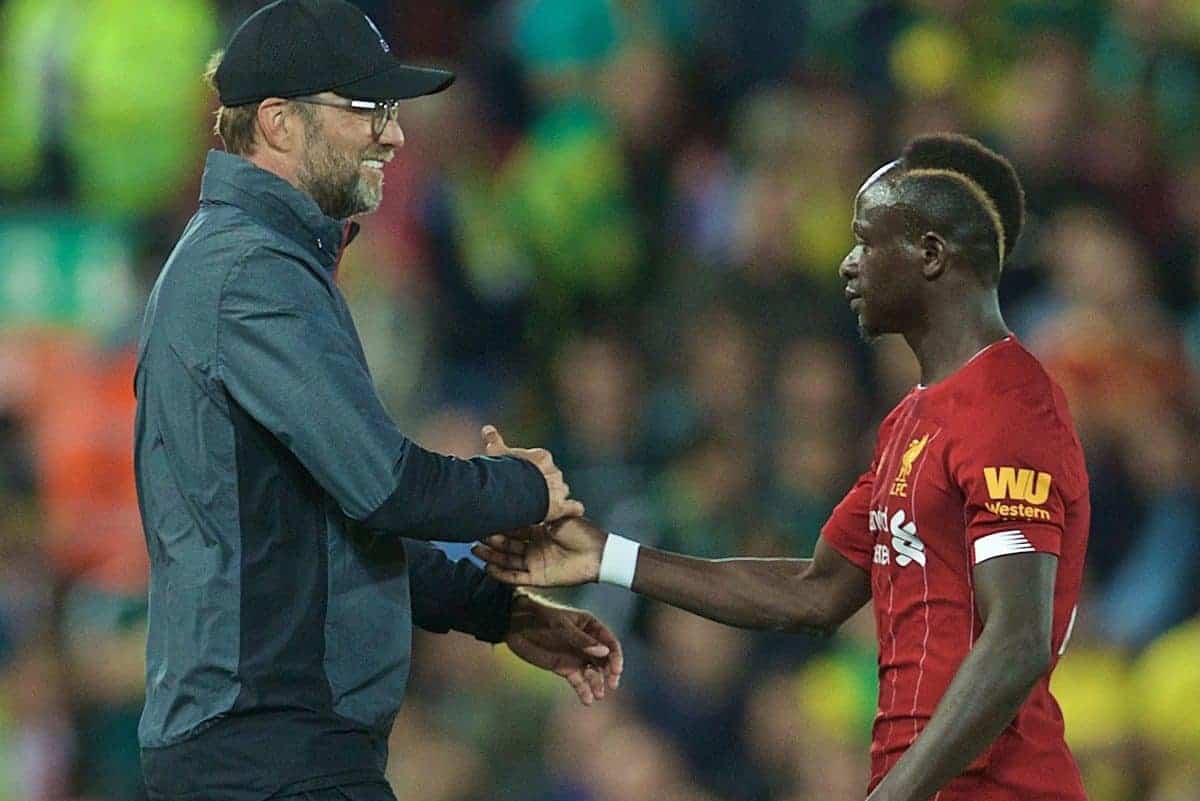 Pep Guardiola accused Sadio Mane of diving ahead of Man City‘s trip to Liverpool on Sunday, with Jurgen Klopp swiftly putting him in his place.

Speaking directly after City’s 2-1 comeback win over Southampton on Saturday—played at the same time at the Reds’ victory by the same score at Aston Villa—Guardiola focused on Mane.

He said: “[He] is a special talent. Sometimes he’s diving, sometimes he has this talent to score incredible goals in the last minute. He’s a talent.”

It was a strange comment to make, but came on the back of a yellow card for simulation for the Senegalese at Villa Park, despite replays showing he was impeded by Frederic Guilbert.

In the buildup to the title contenders’ clash at Anfield, it is easy to see through Guardiola’s approach.

The rattled City manager appears to be attempting to influence refereeing decisions and nullify a key threat for Liverpool, with Mane having also won penalties against Leicester and Tottenham this season.

Thankfully, Klopp has not taken the same desperate outlook, rejecting the claims against the No. 10 in his pre-Genk press conference on Monday.

“The papers already asked me about it, and I tried to say pretty much nothing!” he said.

“I’m not really in a Man City mood at the moment, to be honest. I’m not thinking about it.

“Do I like that he says that about one of my players? I’m not 100 percent sure that he spoke about Sadio or about us in general, because maybe he mixed the words ‘he’ and ‘them’ up.

“I didn’t hear Sadio’s name, I don’t know how he could have heard about any incident in the game so quickly after the game that happened there.

“People from other clubs, it’s always like this. But I can say: Sadio is not a diver.

“It was a situation in the Aston Villa game where he got a contact and he went down, it was not a penalty but there was contact.

“And all the other penalties were penalties, because he was in that situation, and stayed there.

“I’m 100 percent sure if something happened like this for Man City they would want to have a penalty, because somebody kicked the player in the box and that’s a penalty.”

It is certainly refreshing to not rely on mind games ahead of a potentially decisive clash in the title race, and it shows the difference between Klopp and Guardiola that one felt reliant on them over a week before kickoff.