Mohamed Salah has scored 50 home goals for Liverpool, but which strikes stand out as his best at Anfield in a Reds shirt?

Salah has been one of the poster boys of the Jurgen Klopp era at Anfield, exploding onto the scene almost immediately after joining from Roma in 2017.

The Egyptian’s first season as a Liverpool player saw him score a remarkable 44 goals in all competitions, but his campaign ended in injury heartache during the Champions League final loss to Real Madrid.

It’s eight in 14 appearances already in 2019/20, with a match-winning penalty at home to Tottenham bringing up his half-century of Anfield strikes for the Reds.

The question is: which efforts make it into the top 10?

In 10th and ninth place respectively, we’ve gone for two beautifully worked goals inspired by Roberto Firmino, who teed Salah up against Bournemouth and Newcastle.

The second of those saw Firmino produce an outrageous backheel, allowing Liverpool’s No. 11 to run on and fire into the net.

Next up is a lovely curled strike against Southampton, with a sublime run and finish at home to Arsenal this season in seventh place, when the 27-year-old roasted David Luiz.

Roma were the latest team to feel the wrath of a Lionel Messi-esque curler back in 2018, as future Reds star Alisson was given no chance in the Champions League semi-final first leg.

Into the top five and it’s a wonderful individual effort against Watford up next, on an evening when Salah scored four times. 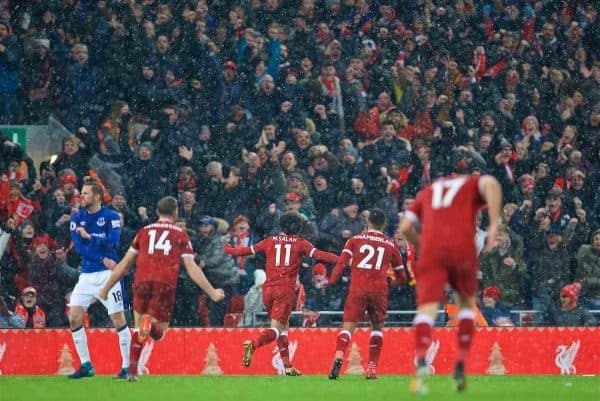 In fourth place is a trademark curler in the Merseyside derby against Everton, on a snowy afternoon at Anfield back in December 2017.

Taking home the bronze medal is the outrageous 40-yard strike in the 4-3 thriller against Man City, as Salah benefited from Ederson rushing out of his goal.

The runners-up prize goes to the Egyptian King’s slaloming run and poked finish against Spurs—it deserved to end up being a winning goal.

That means Salah’s best goal at Anfield to date is the thunderbolt at home to Chelsea back in April, which is one of the purest hits ever seen at Anfield.

It may not have been as subtle as some of his goals, but the technique, and importance of the game, makes it our winner.