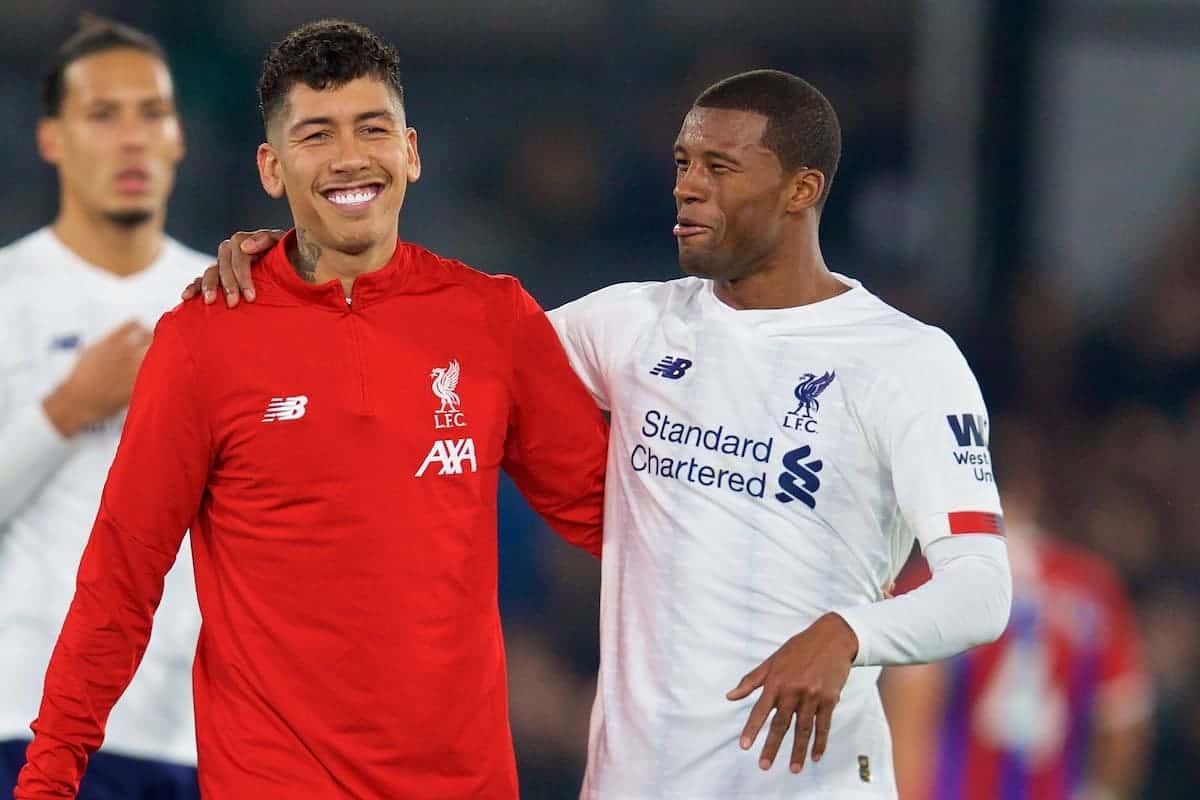 Liverpool made it hard for themselves but they emerged as 2-1 victors at Crystal Palace, and fans lauded the ‘mentality giants’ once more.

The Reds were back in action following the international break where a tense tussle ensued, but all three points returned to Merseyside at the conclusion of the 90 minutes.

Jurgen Klopp‘s side started poorly having failed to assert themselves on and off the ball, and Crystal Palace almost came up trumps before VAR intervened to rule out James Tomkins’ headed effort on the cusp of half time.

And it was the required wake-up call as Sadio Mane found the net four minutes into the second term with what was the first shot on target for the Reds.

But Liverpool’s defiance to fight for all three points was again on show as merely three minutes after Palace had levelled the scores through Wilfried Zaha, Roberto Firmino capitalised on a scramble in the box to send the Reds back into the lead.

Regardless of goal disallowed…Poor half for Trent against Palace.

Started with a bad pass back toward Ali from halfway out for a corner, missed a few Zaha runs, early chance from his bad crossfield pass and then didn't track a runner, all before that cheap FK.

Poor fare. No one in midfield is showing between the lines so the full backs can’t get the ball high enough up the pitch to make any sort of attacking impression.

Predictably dreadful game and lucky to be even. First time all season I would take a draw

“Typical of our season and first halves, now awaiting a typical second half and a typical end result.”

A very post-break first half from #LFC. Disjointed, no shots on target and not compact enough out of possession. Levels below their standard. VAR disallowed a #CPFC goal for Ayew's foul on Lovren in the build-up – similar to Trent's on Zaha, which led to a FK and the chance.

The definition of a post international break performance from #LFC so far.

Sadio Mané has now scored in each of his last five Premier League games against Crystal Palace – he joins Michael Owen (against Newcastle) and Luis Suárez (against Norwich) as nightmare material for one particular club.. #CRYLIV

Manes mentality is elite to match his talent. Misses a chance then bang, scores a minute later. #Sadio #LFC

“Much better intensity to the second half, rewarded with a goal!”

SADIO MANÈ IS THE BEST PLAYER IN THE PREMIER LEAGUE AND I DON’T WANT TO HEAR ANYMORE.

Liverpool so much better in this second half. A show of maturity and control since Mane's goal. Palace having to commit players forward and that's leaving space to exploit. Should really have killed it off. #LFC

And while the Reds again made it hard for themselves, the mentality monsters were back in town…

BOBBY! We’ve done it again! This Liverpool team really is something special ?

“I’ve been impressed with us today. Any other away game where we grind our results.”

“Mentality Giants once again…will not lie down.”

Supporting Liverpool is so stressful ??

Just as they have done so many times this season, Liverpool dig deep again at the death. Van Dijk's effort not dealt with and Firmino is on hand to turn it in. Huge moment for #LFC.

Overall, there was plenty to celebrate as the Reds notched their 12th win of the campaign…

The well still hasn't run dry for Liverpool. Just when you thought they might have run out, they found a winning goal. Firmino's first since September. Scruffy but huge.

Liverpool remain eight clear at the top, and 12 ahead of City who play now.

Gotta love this club! Never settling for draws anymore, it’s a win or nothing.

Lovren and Van Dijk have been absolutely outstanding so far. Solid.

Huge win for the disjointed Reds, away at a tough ground after almost all the team away on international duty. Palace such a threat on the break. And thanks to VAR for spotting a much bigger push on Lovren than TAA's on Zaha (who collapsed as if poleaxed) to win the free-kick.

“This team, coach and fans are not to be denied! End of! Up the unbeatable unbearable Reds!”

There’s something about returning from the international break. Never fluid, always laboured. But there’s also something that the Kop wants you to know…
Four mins between Palace equaliser and Firmino’s winner. This Liverpool side are a new breed. Refuse to lose. #LFCdigest

Liverpool’s sixth 2-1 win in the league this season.