Jurgen Klopp is likely to make further changes to his Liverpool side as they take on Everton at Anfield, three days before a trip to Bournemouth.

The Reds’ busy December has begun and does so with a Merseyside derby, with the visit of Everton the first of 10 games across four competitions, three countries and two continents in the next month.

Marco Silva’s side are in disrepair, with the manager under growing pressure and defeat potentially seeing them drop into the relegation zone, having won just four of their 14 games so far in the Premier League.

The manner of Liverpool’s 2-1 win over Brighton on Saturday proved they cannot underestimate any side as they push to keep their lead at the top of the table.

And the events of the weekend will impact on Klopp’s selection for the derby, most notably in goal but likely elsewhere too.

Here’s how Liverpool could take to the field on Wednesday night.

The most notable absence for this game is, of course, Alisson, who is suspended after his red card on Saturday.

The winner of the inaugural Yachine Trophy will be back for the upcoming trip to Dean Court to take on Bournemouth, but for now will be replaced by Adrian.

Elsewhere, Klopp has confirmed Joel Matip “needs a bit more time” as he recovers from a knee injury that is proving more long-term than originally expected.

Matip and Fabinho will both likely miss the remainder of 2019, which limits Klopp’s options in defence and midfield, but also gives opportunity to others during a period of rotation.

Klopp made three changes to his side for the win over Brighton, and could opt for a similar reshuffle at Anfield in midweek.

The likes of Joe Gomez, James Milner, Adam Lallana, Naby Keita, Xherdan Shaqiri and Divock Origi could all come into contention, with the manager able to change his side to little detriment.

After Bournemouth on Saturday comes a decisive trip to Salzburg in the Champions League, and Klopp and his backroom staff will no doubt be planning ahead for that Group E clash.

While the derby is a must-win, and Klopp has emphasised that Everton cannot be underestimated, this could be a tie that allows rotation.

Perhaps it will be a night for Gomez to return to centre-back, while Keita could be given a chance in midfield and Lallana may even be considered as a stand-in No. 6.

The obvious starting point for Klopp in the buildup is the return of Adrian to the lineup, with the Spaniard poised to make his first start since October 5 and Caoimhin Kelleher set to deputise.

Providing Adrian with a solid core at the back would be beneficial, with his immediate concession of a free-kick against Brighton certainly questionable in terms of Martin Atkinson’s influence, but still a sign that he requires support.

Therefore, Klopp may be wise to stick with the defensive line of Trent Alexander-Arnold, Dejan Lovren, Virgil van Dijk and Andy Robertson for the derby.

In midfield, Jordan Henderson or Gini Wijnaldum should remain in the deep-lying role, with the other more advanced, but this may be the time to reintroduce Keita in midfield.

Keita could come in at Alex Oxlade-Chamberlain‘s expense, while Mohamed Salah, Sadio Mane and Roberto Firmino are retained in attack: 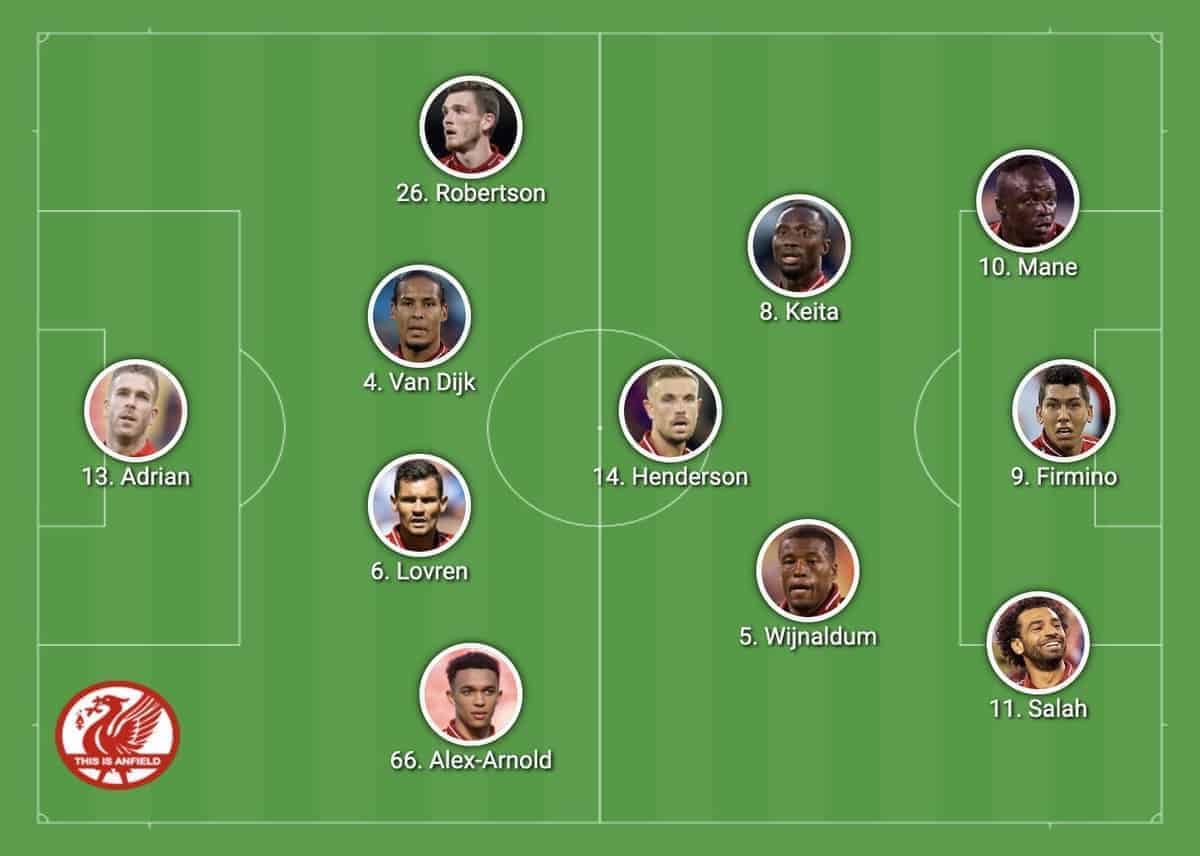 Gomez’s poor outing at right-back in the 1-1 draw with Napoli last time out in the Champions League should serve as evidence enough that the 22-year-old is now defined as a centre-back.

While the south coast could be a better background for his return to his natural role alongside Van Dijk, it could well come against Everton—having excelled in the same fixture this time last year.

He could provide a straight swap for Lovren at the back, while Milner could come in for Wijnaldum in midfield, with Klopp starting his vice-captain in six out of eight Merseyside derbies so far.

Milner and Henderson could line up alongside Oxlade-Chamberlain in an all-English midfield, leaving the likes of Lallana, Keita and Shaqiri as impact substitutes.

So too would be Origi, which could set him up to reprise his heroic role from last season as Salah, Mane and Firmino start again: 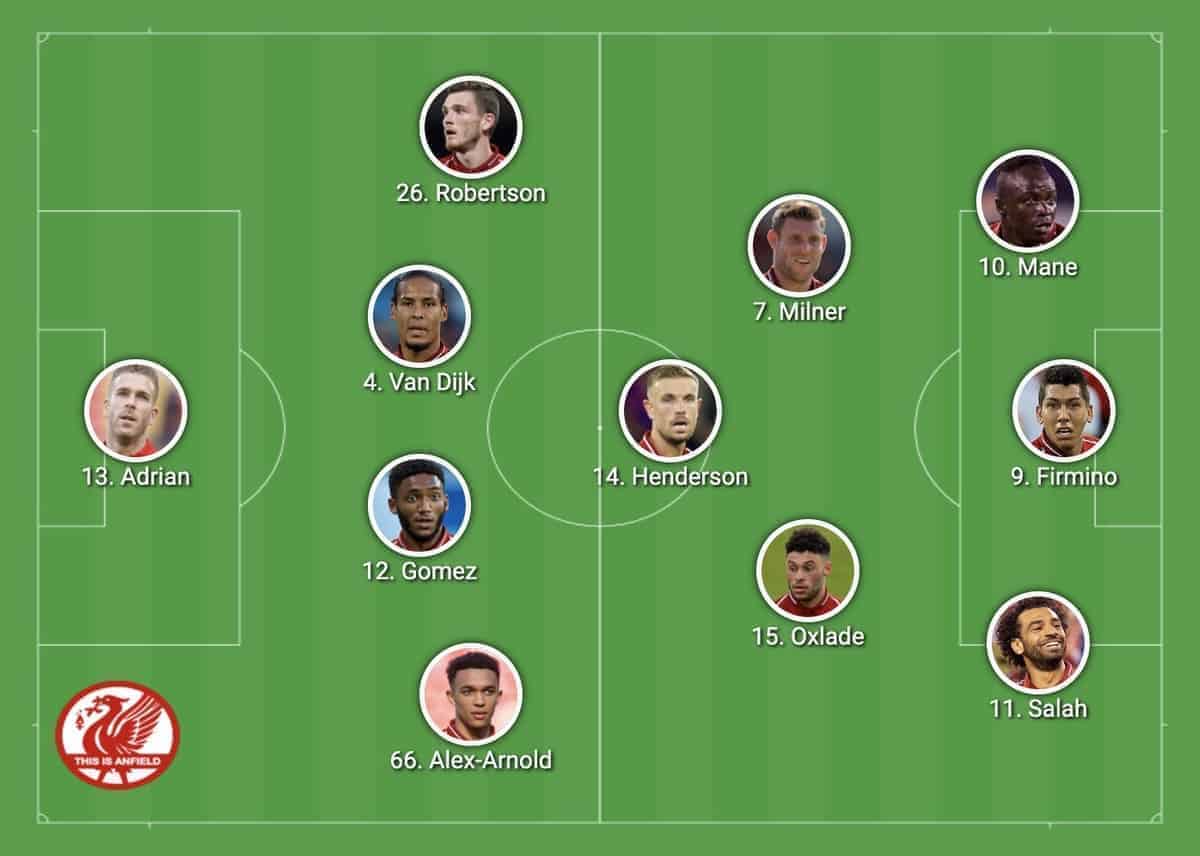 It is difficult to predict how Liverpool will take to the field throughout a congested winter, but Klopp is unlikely to make wholesale changes for any game.

Instead, careful rotation will be implemented, and the Reds should be expected to shape up similarly to Saturday’s victory over Brighton as they seek a 14th league win.