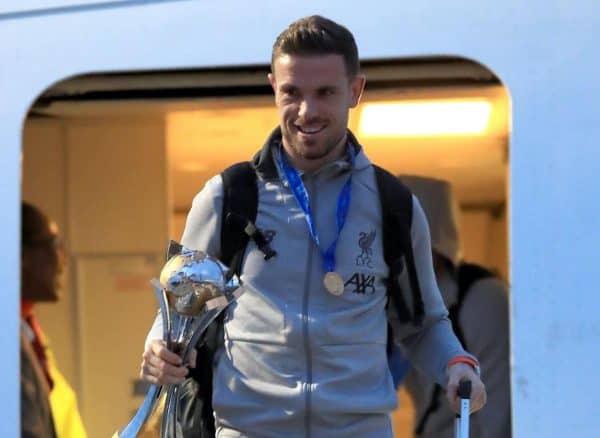 Another tick in the box as Liverpool secure retribution over Flamengo

Liverpool were crowned world champions for the first time on a night where retribution was had and the referee made a lasting impression.

It has a certain ring to it, while simultaneously not being the most glittering prize we are hunting down this season. In-depth conversations have taken place over whether or not we were right to cash in the League Cup to pursue it.

That’s the League Cup, a competition that increasingly feels like it is on borrowed time; a competition where Jurgen Klopp would have attracted criticism had he fielded his strongest XI at Villa Park in the quarter-finals.

It was a mild irritant that we had never won neither the Club World Cup before or its predecessor the Intercontinental Cup. It was an itch that needed scratching rather than any pained odyssey to reach some sort of unreachable holy grail.

This was a game played out with an eighth of an eye on what was happening at Eastlands, or at least for the 21 minutes between Jamie Vardy opening the scoring for Leicester City midway through the first half and Ilkay Gundogan putting Manchester City ahead shortly before half time.

As a prize, it has always felt to me to be a belated pre-season event, one that is a loose relation to the European Super Cup and the Community Shield.

A trophy that is ‘nice’ to win, rather than one that is season-defining. It is one of those where whether you lift the trophy or not, the thrill or disappointment of it has gone before you make it back to the car, airplane, boat, bus or coach you arrived in to watch it.

Liverpool made a bright start. Three early chances were created, before letting Flamengo begin to stretch their legs a bit. This was virtually replicated in the second half, almost word for word, with the added ingredient of Bobby Firmino hitting the post. The rebound spinning away in an oblique manner.

The 1981 connections made it all a bit like those ‘Big Match Revisited’ showings that still tip up on BT Sport.

I’m old enough to remember our 1981 face-off with Flamengo. Three years later we lost out again, this time against Independiente. They felt like avoidable defeats in games that Bob Paisley had refused to take part in, after winning the European Cup in 1977 and 1978, predominantly mindful of the travel, disruption and potential safety of his players.

If you have an idle morning over the Christmas period, then read up on the brutality of the Intercontinental Cup games, particularly the ones that took place in the late 1960s.

Even better, seek out some of the footage as in 1969 AC Milan’s players were reputedly threatened, on the pitch, by their needle wielding Estudiantes rivals in Buenos Aires, the European visitors having had hot coffee poured on them from the stands as they walked from the tunnel.

A game in which Milan’s Néstor Combin was left unconscious and blood stained, having had the ‘temerity’ to be an Argentine-born player returning in enemy colours. Not a good day for Milan to be wearing all-white.

Manchester United had literally battled it out with the very same team a year earlier. Meanwhile, in 1967 Celtic went toe-to-toe with Racing Club in a playoff game that was christened as ‘The Battle of Montevideo’.

It is the legend of those early days of the competition that makes the Club World Cup so valued by South American teams, and indeed taken seriously by Italian teams when they rise to Champions League winning levels.

Viewed from Anfield in the old currency that Paisley and Joe Fagan dealt in it was an unwanted distraction, while in contemporary terms the right to brand yourself as “World Champions” will have Liverpool’s marketing department drooling.

Purely in footballing terms, it is now a box ticked. Something we hadn’t obtained before yet have now collected.

If it were a Christmas gift it would be that retro Breville toastie maker or the SodaStream that you were delighted to be given, only for it to be used once before being pushed to the back of the most unloved cupboard in your kitchen or hawked on eBay.

Another trophy lifted by the brilliant Jordan Henderson, won thanks to a wonderfully audacious goal from Firmino who was set up by a combination of a stunning ball from Liverpool’s captain and the audacity of Sadio Mane. A game blighted by poor refereeing, the trip to Qatar was worth it, if only for that goal.

For those who weren’t around back then, the officiating was like that of the 1986 World Cup, when referees from sedate football playing nations were expected to keep up with the best teams in the world. It doesn’t bode well for an already controversial 2022 World Cup.

If you arrange a game to settle the dispute over who the best team in the world is, then you really need the best referee in the world to oversee it.

Beyond that, Alex Oxlade-Chamberlain departing injured, the unscrupulousness of Rafinha – Andrew Robertson needs a statue – and the dawning of cramp for goalkeepers were the standout points of this game.

Both player and team could do without an extended spell on the sidelines for Oxlade-Chamberlain. Klopp is hopeful it isn’t a serious problem.

Of course, VAR had a say in proceedings. Penalty and a yellow card, to no penalty, to not even a free-kick and the expunging of the yellow card. It should have been a red card and a free-kick, and it meant we had to proceed to an unwanted period of extra time.

Firmino scored that winning goal though, which successfully shut up this strange and emerging social media anti-Firmino faction, at least in the short term.

The Biggest Six Weeks of the Season

Jurgen’s lads are coming home then, as world champions no less. A couple of days of rest it is before launching into just the four games in 11 days, bookended by a trip to face second-placed Leicester and an FA Cup Merseyside Derby against a now Carlo Ancelotti powered Everton, sandwiching the visits of the in-form Wolverhampton Wanderers and Sheffield United.

Tottenham Hotspur and Manchester United are lurking in January, as is a swift return game at Wolves.

A ten-point lead we might well harbour, but the hard work is all still ahead of us. Yet, if the numerical advantage we currently enjoy is still intact by the beginning of February, then the hopes of our rivals that we will throw the Premier League title away will be mortally wounded.

The next six weeks will be the most important of our entire season.