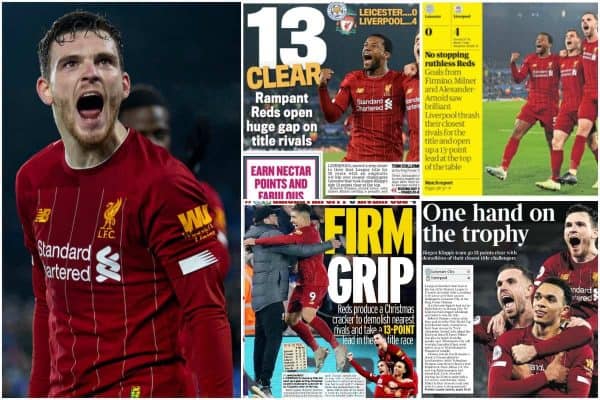 The media were full of praise for the table-topping Reds after they dispatched with would-be challengers Leicester on Boxing Day with a dominant display.

Liverpool were irrepressible at the King Power stadium, hitting four without reply to open up a 13-point lead at the top of the Premier League.

Roberto Firmino headed in Trent Alexander-Arnold‘s cross as Jurgen Klopp‘s team denied Leicester a single shooting chance in the first half, while missing a host of other opportunities themselves.

After the break, though, the Reds went through the gears somewhat; James Milner scoring a penalty, Firmino hitting his second and Trent adding the fourth, all within a seven-minute spell.

There’s just one game left in the calendar year, but first here’s all the best of the media reaction to Liverpool’s 4-0 win on Boxing Day.

Plenty of reporters noted the gap opening up, both in terms of points and performances…

Sam Wallace of the Telegraph thought the fact Liverpool won with such authority showed the difference between the genuine elite and the would-be challengers:

Leicester try to play the game the same way as the big boys, although unfortunately for them over the last two games the big boys have shown that they have done it for longer with players that Rodgers’ club simply cannot afford or retain.

Phil McNulty wrote for BBC Sport that the Reds are showing a consistency unmatched by any other team:

This means a Liverpool team that have lost one league game in 2019 and are on a 34-game unbeaten league run now probably need to lose four of their last 20 in this campaign. And that is factoring in that their challengers must keep winning all of their games, a tough assignment when both Manchester City and Leicester City have not come within touching distance of Liverpool’s consistency this season.

ESPN’s Mark Ogden feels that the only question regarding the Reds and other teams is simply the eventual margin between their points tallies:

It’s also become slightly irrelevant as to when they will win it, too. The only real questions that remain unanswered are about how big Liverpool’s winning margin will be and how many records they will smash along the way.

Melissa Reddy wrote, in the Independent, that the Reds’ performance was all the more impressive given last week’s exertions in Qatar.

The authority Liverpool showed here – away to title rivals after an exacting Club World Cup campaign that required unwelcome long-distance travel and extra time in the final – was astounding.

Wallace stated that Trent’s end product stole the show, despite a wealth of other impressive performers.

And the stand-out player was still Trent Alexander-Arnold. He provided two assists for Firmino and then the 21-year-old swept in his second goal of the season to put the flourish on the end of a great night for the leaders.

Adam Bate, for Sky Sports, said the No. 66 is “redefining” expectations when it comes to the elite in his role.

Redefining what can be reasonably expected of a top-flight, top-class full-back…His goal, courtesy of a perfectly-struck finish on the run, capped a performance that transcended his position.

[His] talent has redefined his role, creating in the process something new and excitingly disruptive…He is an extraordinary player in so many ways, a full-back who operates at a constant level of creative urgency.

Some will point to the occasional holes in the defensive part of his game, flaws that were apparent here at times early in the match. But this is to miss the point to a world-class degree.

There were notable, and well-deserved, words of acclaim for other areas of the team, too…

ESPN’s Ogden pointed to the Reds not just out-attacking Leicester, but also being brilliant defensively, with the Foxes failing to even register one shot on target.

As if to cement their controlling performance against the league’s second-place team, Klopp’s side restricted the Premier League‘s leading scorer, Jamie Vardy, to one off-target shot in his worst performance of the season.

The attacking trio pressed relentlessly for the Reds and the midfield backed them up perfectly—a tactic Ronay noted was on show in textbook fashion.

Liverpool know teams will play like this. They counter-press so aggressively the chances to break are hugely reduced. Before you know it 40 minutes have passed without a shot on goal and the game is being played at an exhausting level of intensity around your own goal.

Ian Herbert wrote in the Mail about just how far Liverpool have come under the current ownership and management, as away fans sang in the terraces at Leicester:

The bragging rights have reached something approaching the realms of the ridiculous for a club who were on their knees and on the brink of financial disaster under previous ownership, just a little more than 10 years ago. ‘And now you’re going to believe us, we’re champions of the world,’ their fans sang without a hint of irony.

…and finally, the Reds taking a big step toward the Premier League title was at the forefront of everyone’s minds.

Wallace explained in the Telegraph Klopp “next game” insistence—and how that would become ever-harder to adhere to:

They do not want to let the mind stray forward to what could be 20 games from now, although it will be increasingly impossible for them to avoid doing so if the performances continue this way.

Herbert pointed to the record-breaking pace that the Reds are setting and suggested it already means the Reds may as well think about celebrating.

The league leaders won with an ease which made a mockery of the notion that Leicester are title contenders and revealed that only Manchester City can feasibly dent a lead, extended to 13 points, which is surely unassailable now. No side has led the Premier League by a greater margin at this stage of the season.

And finally, McNulty labelled the Reds “champions-elect” and feels it’s a matter of time before our long wait is ended.

Liverpool’s rivals, including reigning champions Manchester City, will continue to fight the brave fight but every measure, and the sheer relentlessness of Klopp’s side, says they are now in a fight for second place.

It would take a collapse of unthinkable proportions from a Liverpool team that have forgotten how to lose league games, and are at the peak of their powers, to throw this away now.

Liverpool’s win was that of Premier League champions-elect.