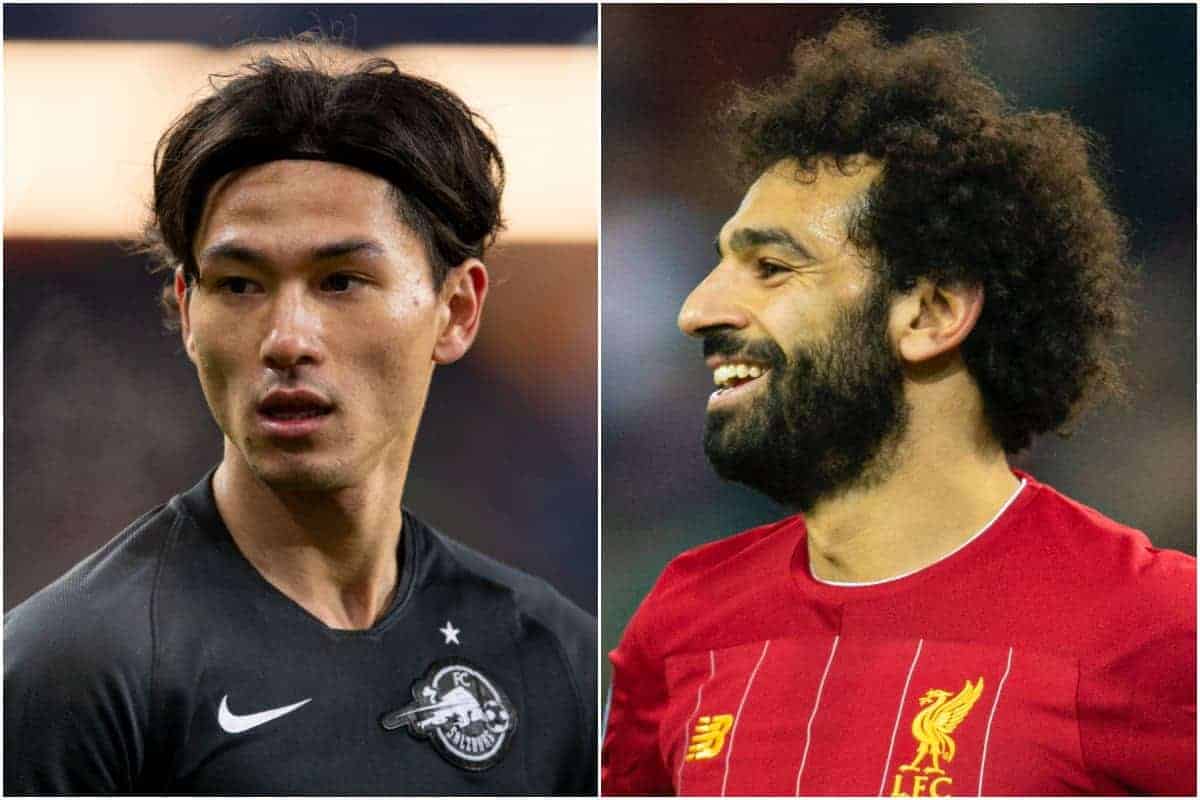 With Takumi Minamino set to arrive from Salzburg in a £7.25 million deal next month, the makeup of Liverpool’s attack could change for the better.

Barring a last-minute medical issue, Minamino will be a Liverpool player when the transfer window opens in January.

The Japan international scored and assisted in the memorable 4-3 victory over the Austrians at Anfield to kick off their Champions League defence. The 24-year-old impressed again when the two sides met on matchday six.

The multifunctional forward ticks a number of boxes for the Reds: he’s at the right age, he’s used to playing in a high-energy system, he can play a number of positions and he’s superb value for money.

The general feeling is that though Minamino can play anywhere across the forward line, as an attacking midfielder or even in a midfield three, he’ll ultimately be the one player that allows the club to give Roberto Firmino a rest.

The last time the Brazilian forward didn’t start in at least 31 of Liverpool’s 38 Premier League matches was during his debut season in England.

Sadio Mane, on the other hand, has started 30 or more on just one occasion while Mohamed Salah’s game isn’t as taxing on the body as Firmino’s.

But this might not be the case. The signing of Minamino will lessen Firmino’s workload but the biggest impact his arrival could have may well be on Salah.

In the eyes of many he’s been out of form this season, yet his goals against Watford brought his season’s tally up to 13. He’s also chipped in with six assists to make it 19 goal involvements in 22 appearances.

His finishing has been streaky but that has always been the case. He’s a player who relies on volume to be at his destructive best.

Jurgen Klopp knows this. The more chances the former Roma man has, the more likely he is to score. And this is perhaps why, when the Reds are chasing a goal, a switch in the system occurs. 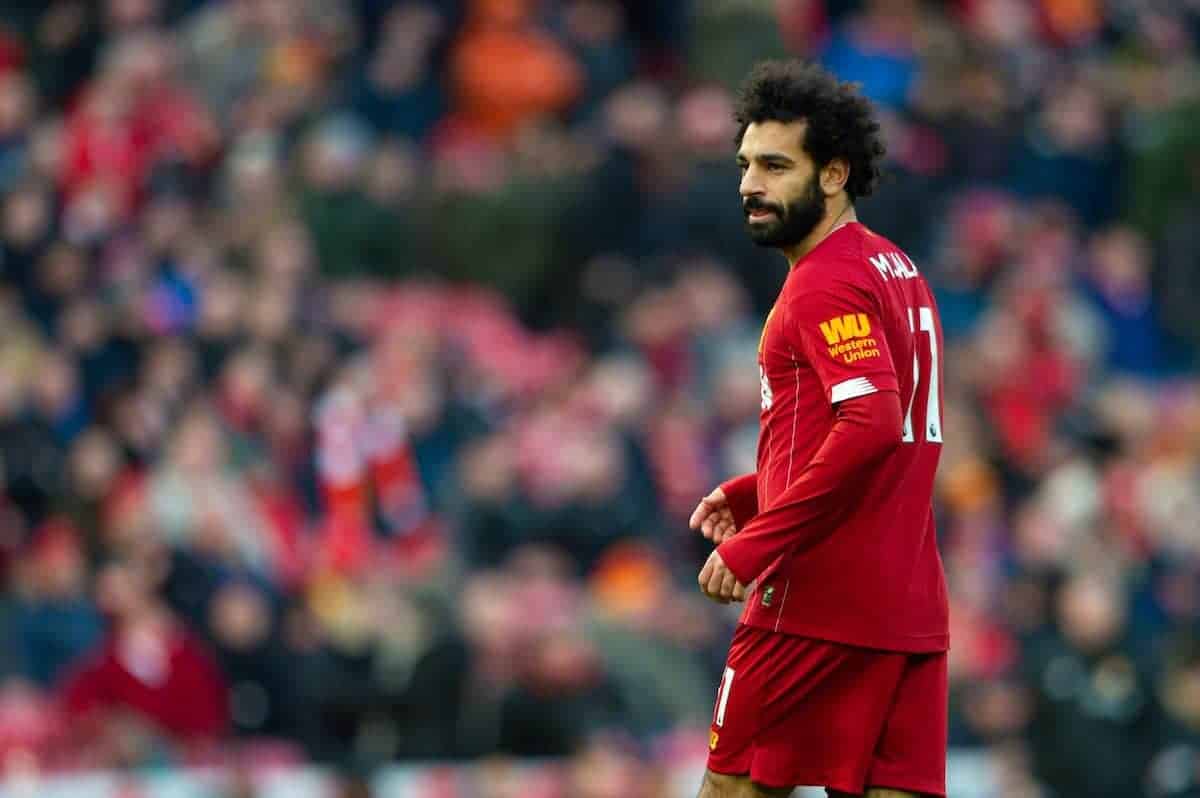 The 4-3-3 changes into a 4-2-3-1 with Salah shifting to a centre-forward position to lead the line; and he was deployed as the No. 9 from the start against Watford.

Mane sometimes swaps wings with Divock Origi coming on to play on the left. Other times it’s been Jordan Henderson acting as a right winger and, on occasion, Klopp has tasked Firmino with occupying that space.

At first glance, it looks as though the manager has simply added another body into the final third but the use of Salah is what is really telling.

There is an argument to be made, however, that the 4-2-3-1 system is one Liverpool have been trying to use for a while now. In every season since Klopp’s arrival, the Reds have used it for a period.

Last season it was when Fabinho was being bedded into the team. Talk at the time was the switch occurred to help get the Brazilian destroyer up to speed.

It also coincided with Xherdan Shaqiri’s involvement in the starting XI. The former Stoke man was used on the right side of the attack with Firmino playing as a traditional attacking midfielder behind Salah.

This move divided opinion with many believing the team just weren’t the same without the Liverpool No. 9 leading the line. But looks can be deceiving.

In the 12 matches Salah started as a centre-forward he scored 12 goals and assisted a further five. That means he only scored 10 and notched just three assists in the 25 matches he started as a right winger.

The experiment didn’t last into the New Year, however, with Klopp quickly switching back to the 4-3-3 when it became fairly obvious the team lacked control.

This was partially down to Shaqiri on the right. He chipped in with some vital goals but he’d often go wandering from the part of the pitch he was supposed to be occupying. Defensively, he wasn’t as diligent as he should have been either.

On paper, the easy solution would be to use Firmino on the right of a 4-3-3 but it isn’t balanced. Liverpool lose explosiveness out wide with that switch. They also lose the Brazilian’s guile in the centre of the pitch if he starts on the right.

But Minamino could change that. 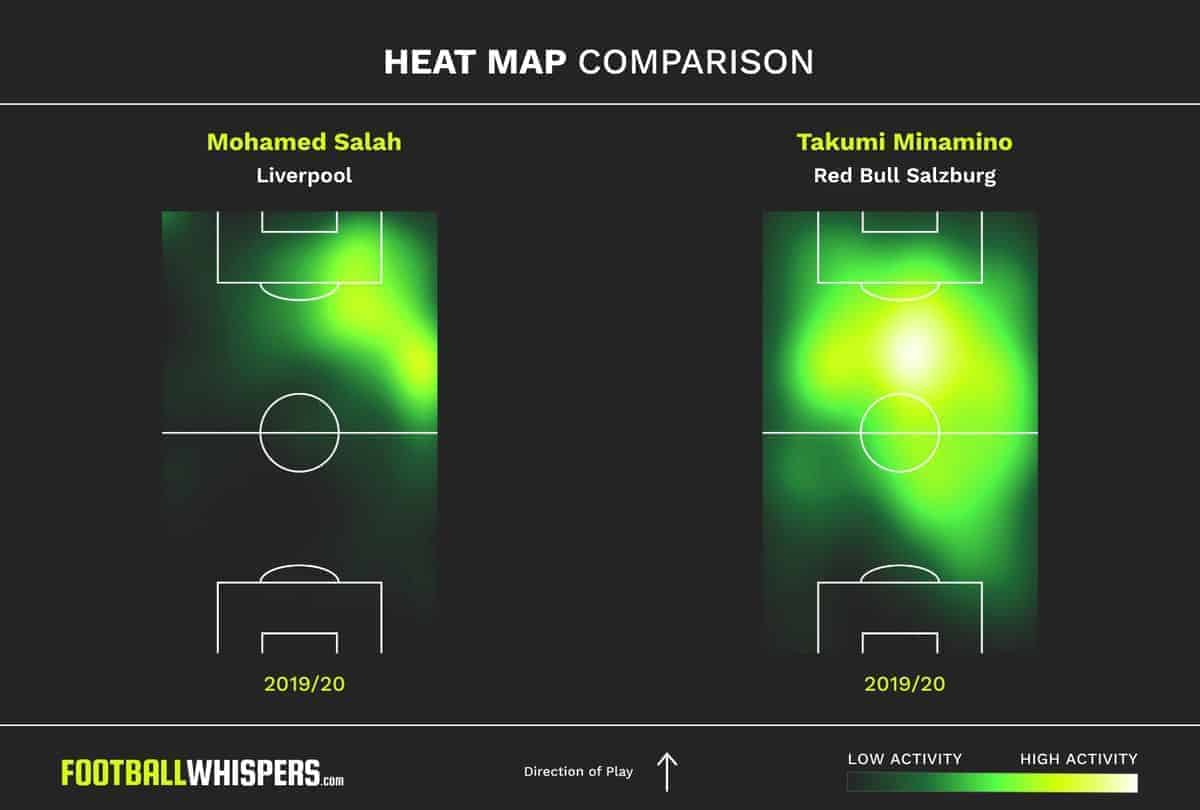 He’s popped up in a number of positions for Salzburg and he impressed for them against Liverpool at the tip of a diamond.

He’s played on the right for the Austrian champions and he does generally tend to drift to that part of the pitch naturally, as evidenced by his heat map above.

It differs to Salah’s but that’s expected with Salah being a goalscorer and Minamino being more of a creative outlet. This dynamic could work well. 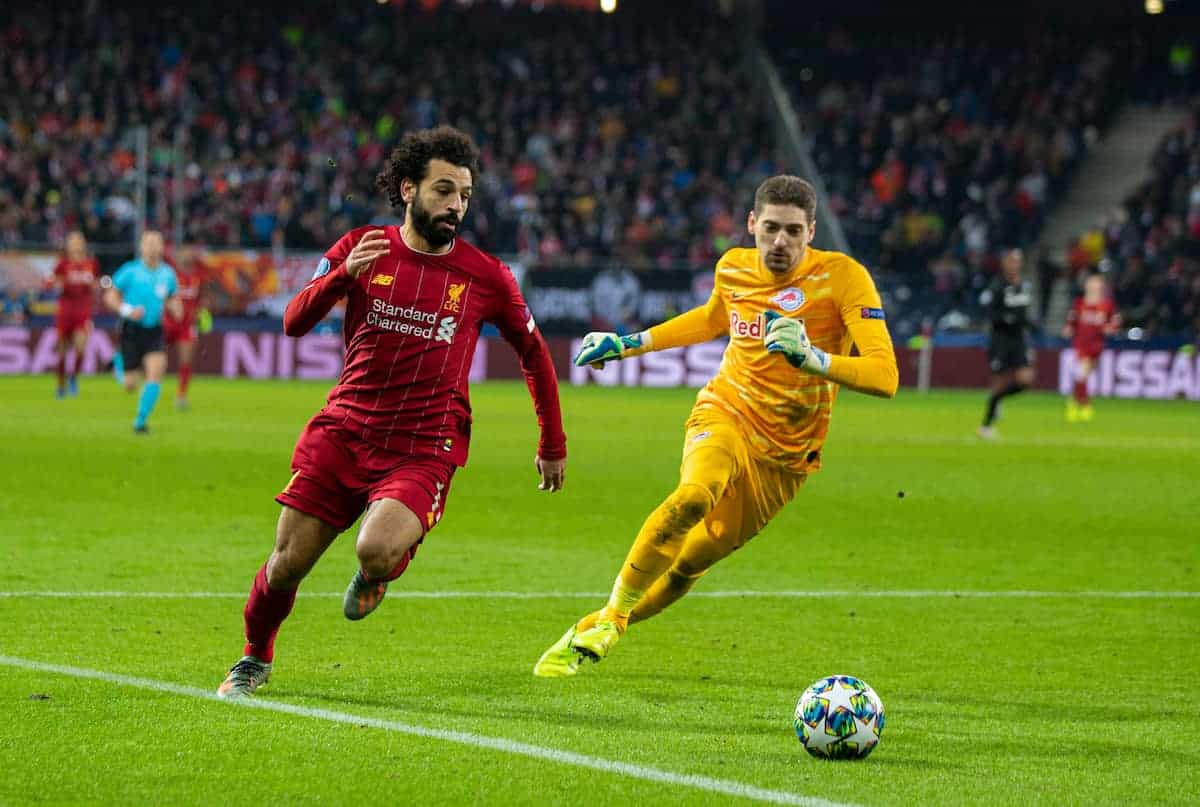 Salah, even when deployed as a No. 9, drifts to the right and plays on the shoulder of the full-back. With him moving outwards, this creates space for Minamino to move inwards.

He could then occupy the false nine position with Firmino supporting him or vice versa.

It’s also worth noting that the Reds use a narrow forward line with the width coming from the full-backs, so using the Minamino in a wide area won’t actually be a dramatic change to what he does now for Salzburg.

But by starting him on the right, Liverpool ensure there’s still an explosive player in that part of the pitch.

Whereas Firmino coasts pasts opponents, Minamino bursts beyond them, just as Salah does. So far this term he’s completed over 50 percent of the 4.2 dribbles he’s attempted on a per 90 basis. 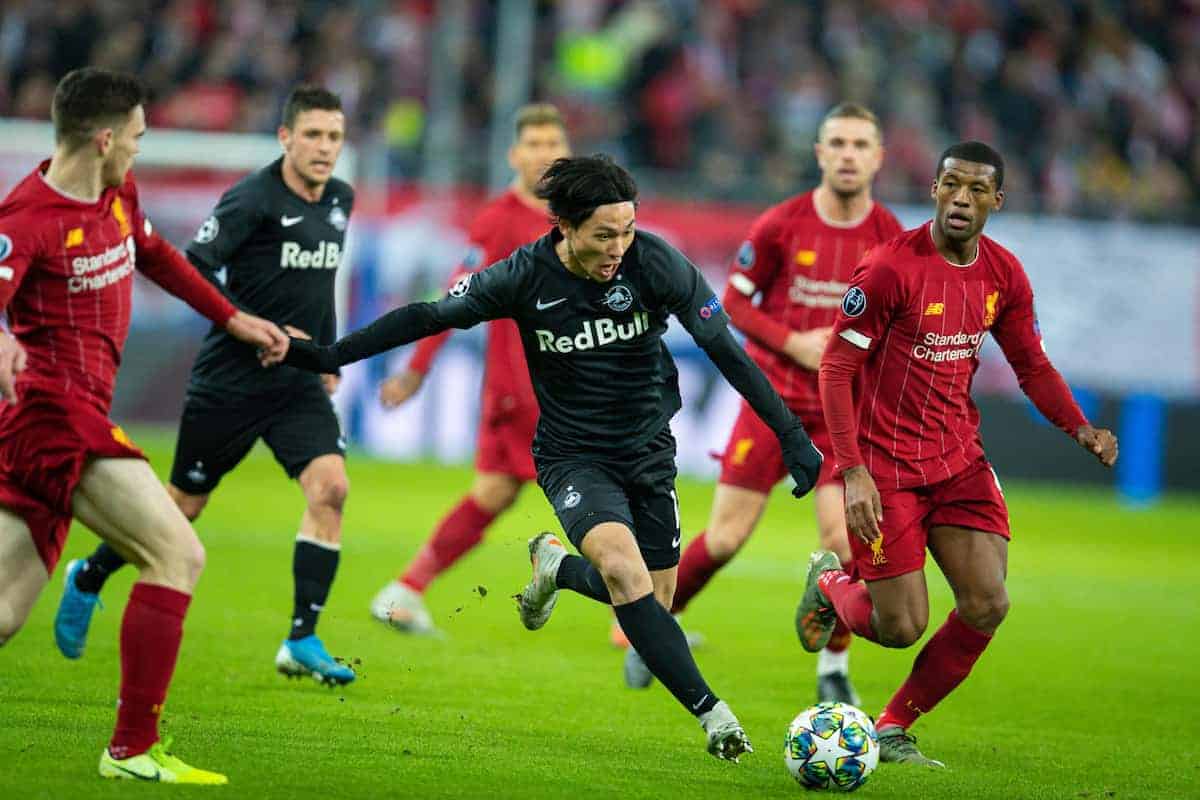 He’s a confident one-on-one player, similar to Mane in many ways, and his off-ball movement often sees him popping up in dangerous positions behind the full-back and in the space centre-backs don’t want to go near.

His assist at Anfield showcased that particular skill.

But his suitability extends beyond what he brings to the final third. Salzburg are a lite version of Liverpool. They’re a high-energy, selfless team and the players understand the demands placed upon them.

Minamino not only offers protection down the right for Trent Alexander-Arnold, but he could well aid the midfield with the counter-press. 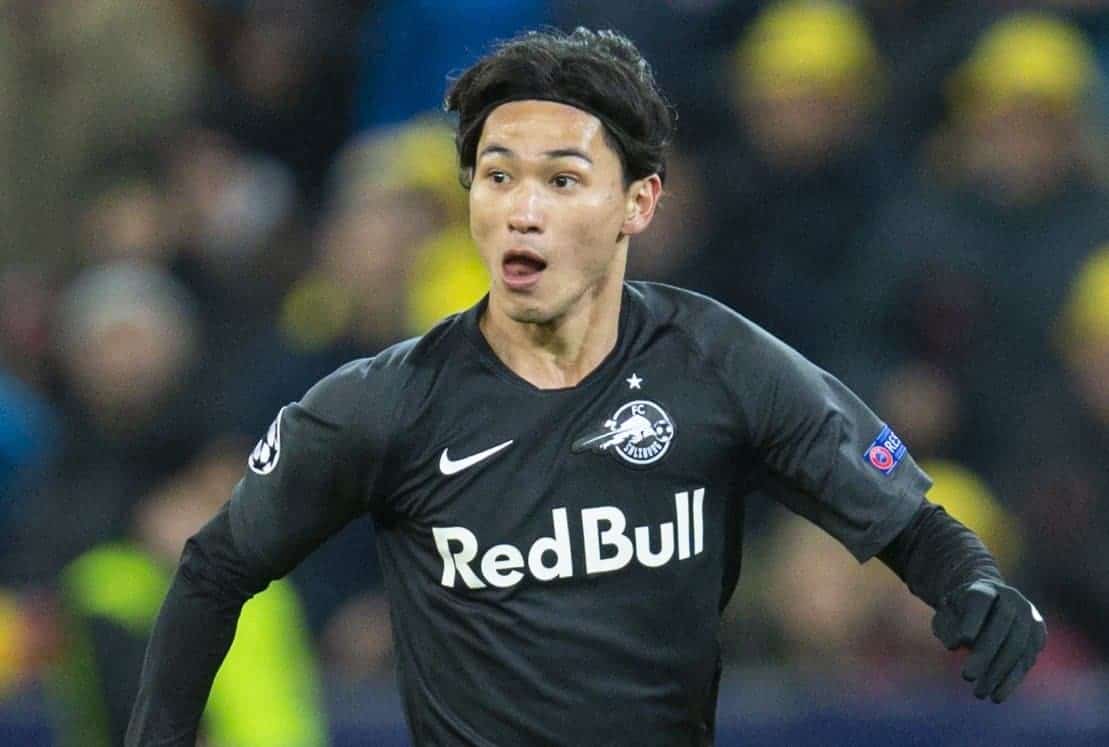 In the Champions League this season, he’s averaged eight ball recoveries on a per 90 basis with four of those coming in the attacking third.

His arrival solves a number of potential problems. It eases the pressure on Firmino, it cuts the over-reliance on Salah on the right but, perhaps more important, it gives Klopp a whole host of new options moving forward.