Mohamed Salah may not always have been at his best this season, but he was Liverpool’s star man in their 2-0 win over Watford.

Many expected the Reds to cruise past their opponents at Anfield, given that it was top against bottom in the Premier League.

The leaders were given a stern test by their spirited opponents, however, eventually getting over the finish line.

Salah curled Liverpool in front superbly shortly before half-time, before a lovely backheel sealed the win late in the day.

It is now 49 points from a possible 51 in the league this season—this is getting ridiculous now. 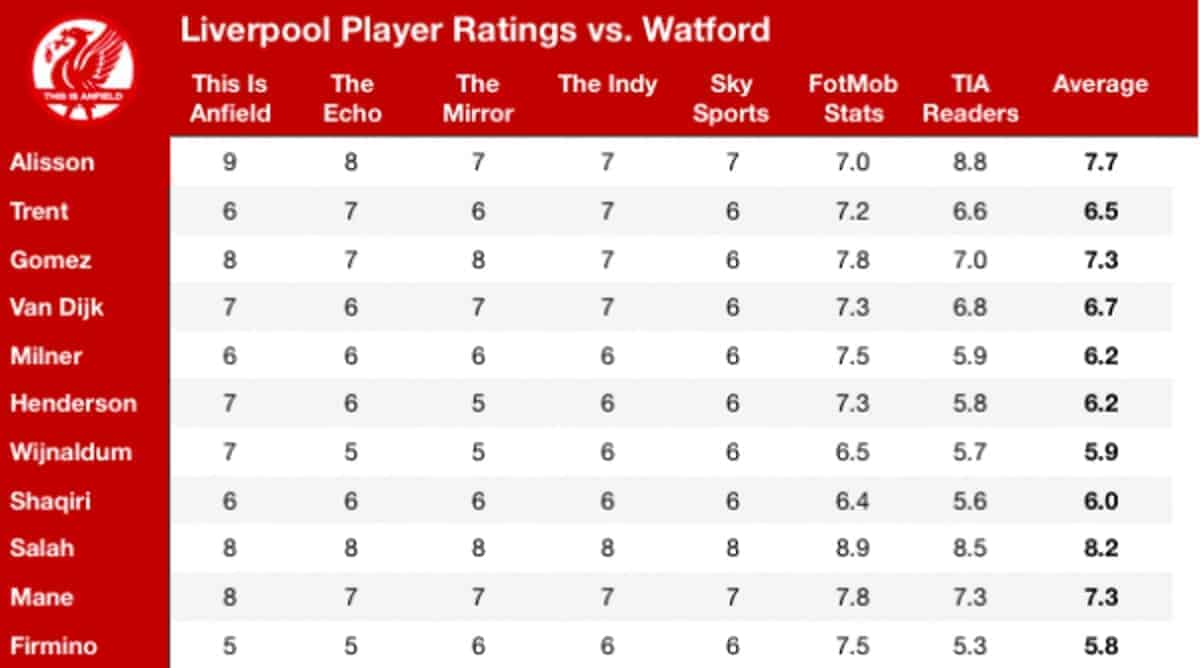 Salah (8.2) was rightly considered Liverpool’s best player against Watford, on one of his brightest showings of the season.

This was the Egyptian at his devastating best, not only scoring twice but also causing the Hornets’ defence problems all afternoon.

Salah was used up front in a 4-2-3-1 formation and TIA’s Karl Matchett feels “playing as a striker seems to suit him this way.”

Meanwhile, the Echo‘s Ian Doyle described the 27-year-old as “a constant pest,” as he took his goal tally to 13 for the season—the same as Sadio Mane.

If Salah was vital at one end of the pitch, Alisson (7.7) was priceless in goal, making a string of important second-half saves.

Alex Smith of the Mirror said the Brazilian was “as solid and composed as ever,” cementing his reputation as the world’s best goalkeeper.

Third place was shared by Mane (7.3) and Joe Gomez (7.3), as the pair enjoyed productive days at the office.

Mane was “a constant menace,” according to Doyle, while Smith pointed out that he “played the middle man in Salah’s grand counter” for the opening goal.

Next up for Liverpool is the youngsters’ trip to Aston Villa in the League Cup quarter-final on Tuesday, before the first team contest their Club World Cup semi-final the following day.