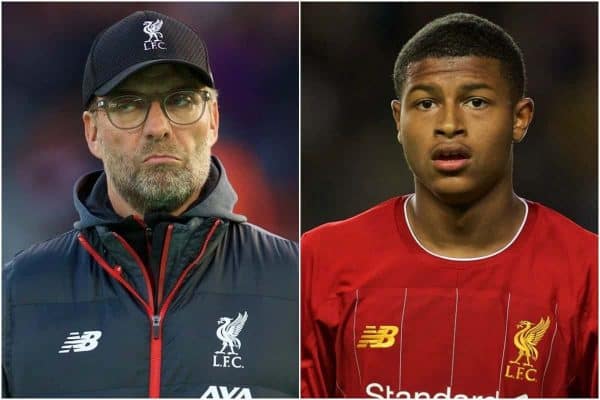 Jurgen Klopp has indicated that, with Rhian Brewster likely to leave on loan, Liverpool could sign another forward in the January transfer window.

Brewster has made two appearances for the senior side so far this season, both in the League Cup, and has been an unused substitute three times across three other competitions.

The 19-year-old has also scored six goals and laid on three assists in 10 appearances at academy level, but given his potential is reaching the stage where he requires regular first-team football.

That is expected to come in January, with a host of clubs including Aston Villa, Crystal Palace, Leeds and Swansea reportedly interested in a half-season loan deal.

With speculation during a period in which Klopp is implementing a rotational approach, this highlights the relatively small squad he calls upon, with Curtis Jones and Harvey Elliott named on the substitutes’ bench at Bournemouth.

Allowing Brewster to leave would reduce the attacking numbers further, with Divock Origi the backup for Roberto Firmino up front.

And speaking ahead of the trip to Dean Court, Klopp confirmed that the club could turn to the transfer market to secure further cover in attack.

“Yes, we have to see,” he replied, when asked about the possibility of a new signing.

“We can’t just give the boys on loan because we have built this squad.

“We have three long-term injuries and four with Paul Glatzel. Two of them were pre-season, two came later with Joel and Fabinho.

“That gives us a 16-player squad and I count the kids, but we cannot only give players on loan and think it is good for him, we always have to consider both situations, the boy’s and ours.

“In the end, we try to make the perfect solution. Sometimes it works out, others it does not.”

Klopp described Brewster as “the one” most likely to head out on loan, based on his situation “age-wise [and] experience-wise.”

However, he added that “if we do it then it 100 percent needs to be the right club,” which could rule out a Premier League side given concerns over his game time.

A switch to the Championship could be more suitable in order to accrue experience, with this certainly paying off for Harry Wilson prior to his move to Bournemouth last summer.

Who Liverpool could target in the event of Brewster’s departure remains to be seen, but there appeared to be interest in a new forward ahead of the campaign, with German veteran Max Kruse linked only to opt for Fenerbahce.