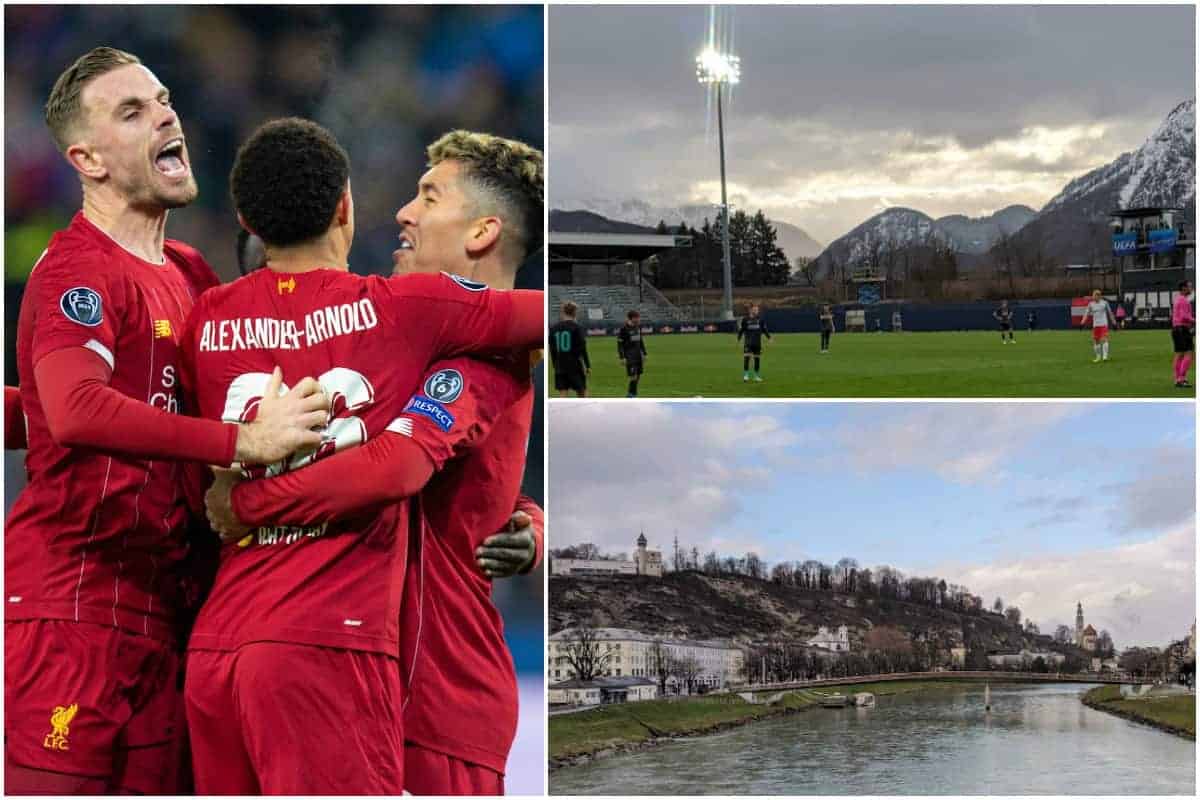 James Nalton was in Salzburg to see Liverpool play in the home of Mozart for the first time – and book their place in the last 16 of the Champions League.

Fans joining the team on the trip to Austria were able to take in one of the more picturesque cities on Liverpool’s European tour, one which is easily accessible and easy to navigate once there.

Easily accessible in theory. For the surprisingly few fans travelling out to Salzburg on the Monday evening flight from Liverpool, there was initially the prospect of the flight being severely delayed due to technical problems.

For a freelance football writer, the idea of getting £250 compensation for a delayed flight is like winning the lottery. But you are eligible for this, not if the flight is delayed by three hours or more, but if it lands three hours late.

As a result, the fella driving the plane put his foot down, or whatever the pilot equivalent of that is, and before you know it you’re over Germany, and Salzburg is so close to the border that the descent begins in the neighbouring country.

It’s one of those airports where right until the last second it looks like you’re about to land in the warehouse of some local business. In their haste to reach their destination, the pilot was pulling it up in the local Red Bull delivery bay. Presumably, there are lots of these in Salzburg.

Even though the football club aren’t allowed to use their Red Bull name in the Champions League due to sponsorship rules, they make up for it by dishing out the energy drink in and around the stadium, with plenty of complimentary cans for the press. 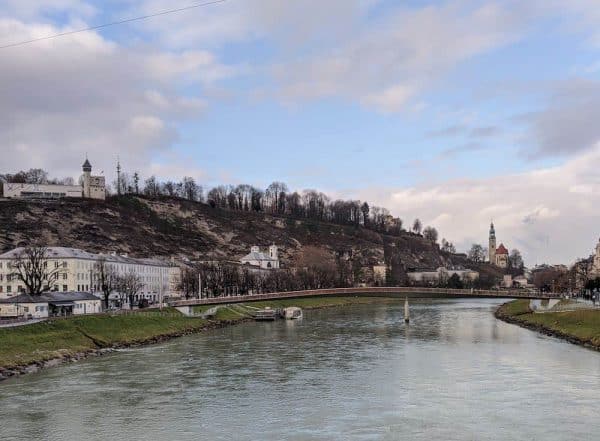 The city itself and the surrounding landscape looks like it’s been painted on. Snow-covered mountains, a river which is almost green it’s so blue, buildings with nice rooves, trees, churches, and horses pulling carts.

And Mozart. Salzburg likes Mozart. The pop star of the classical period was born in the city, and numerous buildings he once lived or worked in are dedicated to him. It was here he penned one of his breakthrough hits, Piano Concerto No. 9, before eventually leaving on a European campaign of his own, eventually landing back in Austria, and settling in Vienna.

Salzburg’s Baroque architecture fits well with the Mozart theme, and in the old town area, you are not woken by people falling out of nightclubs at dawn, but by church bells and cello practise. 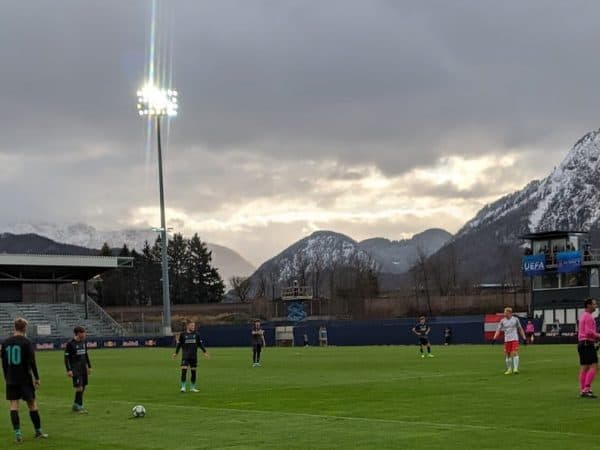 One of the best things to do on a European away trip, if you like football, is try to find where the UEFA Youth League game is being played.

This usually takes you to some quaint outpost which can provide a slightly different experience to the ready-made tourist areas of the city.

Liverpool’s Youth League venue is in St Helens, for example…

In Salzburg’s case, the venue was Grödig, home of SV Grödig, about a 30-minute bus ride from the city centre. It’s surrounded by mountains. The summit of the nearby Untersberg massif can be accessed by cablecar, which could only just be made out in the camouflage of clouds and snow.

Liverpool’s U19s gave themselves a mountain to climb… going 2-0 down in the first half but managing to score three in the second period to qualify directly for the Round of 16.

Another good way to see more of a city is to accidentally get on the wrong bus or train. This often involves a detour or a long walk to get back on track, and takes you to areas the travel guides won’t mention.

If someone, hypothetically… did do this on the way to the stadium, it’s no bad thing, as one of the best ways to travel to a football match is on foot or on public transport, joining the ever-increasing crowds as the stadium draws nearer.

One thing you might notice on the way to the Red Bull Arena is that there is a big Ikea in Salzburg, as there is in Warrington. The similarities end there.

In terms of football in the city it’s easier to notice the team’s Red Bull branding than it is to notice the sport itself, but once entering the stadium it’s typical of a central European football club.

There are large banners, almost constant singing, a stadium announcer who sounds like he might announce the winner of a raffle at some point in between playing classic rock songs.

You’ll Never Walk Alone was played after the game, which was a nice touch, but most of the Liverpool fans had gone by then, which in itself is a positive.

Away fans can often be locked in the stadium for some time after the final whistle, but here Liverpool supporters were ushered politely onto the buses taking fans wherever they wanted to go — which was presumably back into town to listen to Mozart’s greatest hits.

Where next on Liverpool’s magical European tour?