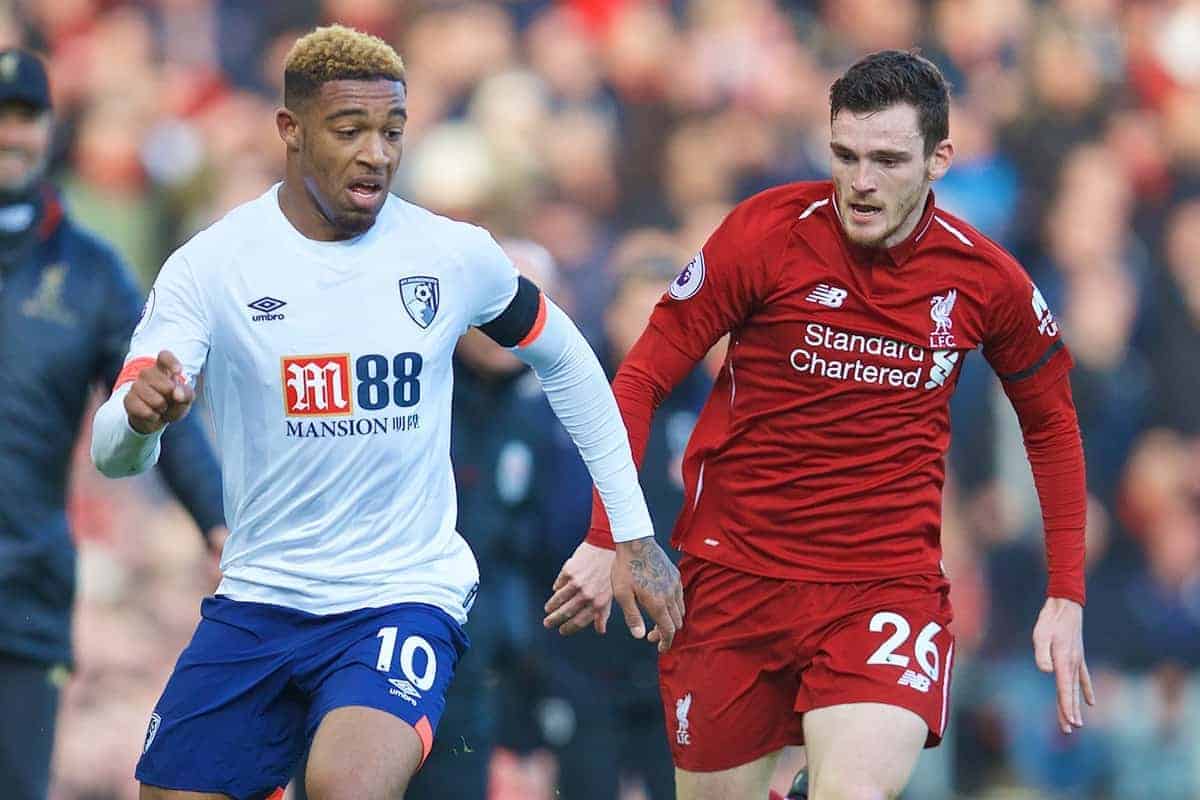 Liverpool head to Bournemouth looking for a third consecutive win at Dean Court, as they aim to hold their lead at the top of the Premier League.

Following a trio of unconvincing results, the Reds enjoyed the rout they had long been threatening as a much-changed side thrashed Everton 5-2 on Wednesday night.

Three days after, and they are back on the road for a trip to the south coast, taking on a Bournemouth side who, like the Blues, are struggling this campaign.

Eddie Howe has overseen just four wins in the league, with four of the Cherries’ seven defeats coming in the last four games.

However, their most recent victory came with an impressive showing at home to Man United, and Howe will be clinging to this as he hopes to inspire Bournemouth to become the first side to take three points from Liverpool.

With many of his big names rested, though, Jurgen Klopp will be confident of another positive result as the Reds set the pace at the top of the table.

There are no new injury problems for Liverpool, with Joel Matip (knee) and Fabinho (ankle) the only first-team regulars sidelined.

Klopp did, however, indicate that there were “little concerns” within his squad after the Merseyside derby, which could impact his planned lineup for the weekend.

The manager is likely to make more changes, having opted for five in midweek, with Alisson set to return after his suspension, and Jordan Henderson, Roberto Firmino and Mohamed Salah almost guaranteed to start too.

Joe Gomez, Alex Oxlade-Chamberlain and Naby Keita are all options if Klopp opts to reshuffle further.

Bournemouth will be without the ineligible Harry Wilson, while Steve Cook (wrist), Adam Smith (ankle) and Josh King (hamstring) are ruled out with injury.

Last 5 Away to Bournemouth (All Competitions)

A piece of advice for the visiting fan: My standard advice would be to make a weekend of it. Bournemouth is known as a tourist haven for a reason.

Despite Liverpool’s 4-3 loss back in 2016 depicting Dean Court as a difficult stadium to visit, only two current Premier League sides boast a worse home record against the Reds.

Klopp’s side have won on three of their four visits to Boscombe, for a win ratio of 75 percent.

Liverpool have also scored more league goals at Dean Court than at any other stadium during Klopp’s reign as manager, with 13.

Speaking at Melwood on Friday, Klopp expressed his relief that Wilson was unable to play against his parent club, and assessed the loanee’s progress so far:

“Oh, Harry. I’m happy, to be honest, that he cannot play against us!

“Each free-kick is a proper, proper threat. But we were never in doubt about Harry’s shooting abilities, his skills in that part of the game are incredible. World class for sure.

“But Harry is at Bournemouth to improve all the rest of his game as well. So being involved, being decisive, being between the lines, using the speed and all that stuff.

“Now [Bournemouth are] not in the best run but even there he scored two goals in the game before the last game [against Tottenham]—nice goals, as well.”

Bournemouth vs. Liverpool is not on TV in the UK, with the Saturday 3pm kickoff the last of the Reds’ games to not be broadcast in 2019.

This Is Anfield’s Chris Williams will be providing updates, analysis and our usual biased view on our matchday liveblog, however, kicking off from 2.15pm.