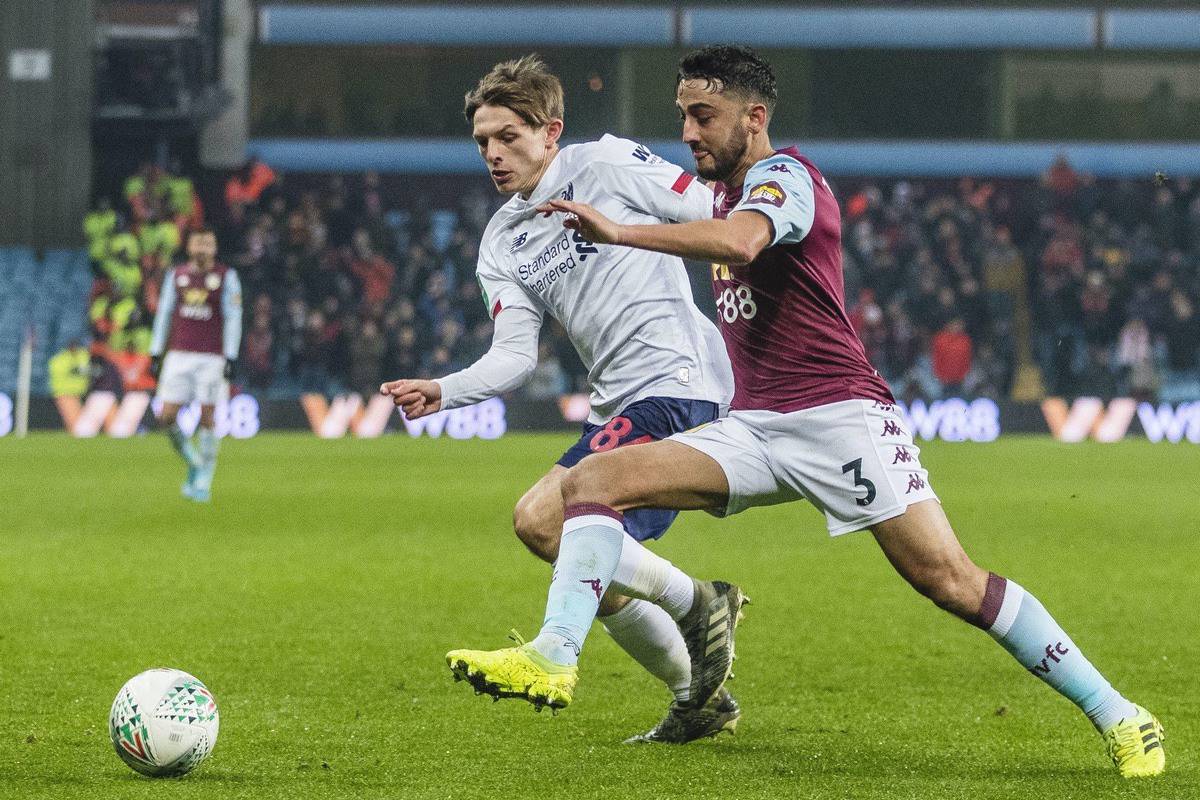 Liverpool fell to a 5-0 defeat at the hands of Aston Villa in the League Cup, but fans were more than impressed with the display of the club’s youngsters.

Neil Critchley oversaw a young Liverpool lineup with an average age of just over 19-years-old, with eight making their debut, in the League Cup quarter-final at Villa Park.

The Reds made a bright start to proceedings and asked all the early questions, but it was Aston Villa who dominated the scoresheet as their experience and clinical edge in front of goal proved decisive.

Liverpool were punished for their errors but they created a number of openings of their own throughout, with their inventive and confident play a key highlight.

While the Reds were unable to peg one back, the outing will no doubt prove to be an invaluable learning experience for all involved.

Erm, these lads are boss! As is the support.

The kids have done the shirt proud. Unlucky with the goals.

Absolutely love the fact we get to see these youngsters play on a big stage.

Despite us losing, anyone who argues should be question what other clubs are doing to give their young footballers exposure to first team/top level football.

Proud of this approach, proud of our club.

Proud of the kids for stepping up and giving it a go just imagine being 16/17 playing for Liverpool what a Dream not there fault just a learning curve for the kids ?? #ynwa

Clearly so talented, but I think Klopp will be most pleased with Elliott’s work rate and attitude. Has run a lot and keeps showing for the ball, despite being on the end of a shellacking. Suspect only terrible luck will stop him becoming a star.

16-year-old Harvey Elliott playing without fear, instead instilling it into a former Premier League full-back in Neil Taylor. Beaten him time and time again and supplied chances aplenty. Utterly fantastic.

“Hoever and Elliot look great. Harvey, in particular, looks like he is going to be world-class.”

Elliott already better than half the Villa team.”

Elliot is the one isn't he. On a different level to the others.

Traveling Kopites still louder than ever despite the score.

?5000 travelling Kopites getting behind the kids….you love to see it? #LFC #AVILIV

“Query….are there any villa fans there…cause we can’t hear them…only the travelling Kop…”

No one, and I mean absolutely no one should criticise these young Reds tonight.
They've given their all for Liverpool Football Club in this game.
Shout out to the travelling Reds too for their magnificent support for the team and for attending in numbers!#LFC #YNWA

Probably more Liverpool fans than Villa fans in the stadium now. Certainly sounds like it.

The situation Liverpool found themselves in was questioned, but there was a lot of positivity from fans after the final whistle…

Villa have clearly opted to ease off in the second half but the #LFC youngsters have acquitted themselves well. They might not all have careers at Anfield – history suggests very few will – but this is a night they’ll always look back on with pride no matter what they achieve ?

James Norris is 16, comes off the bench for a League Cup Quarter-Final tie. A brilliant moment for him, but it also shows what a joke this competition is… #AVLIV

#LFC have played a lot worse with a far more experienced teams. A night where the scoreline will tell one story but the performance will tell another. The kids did themselves proud tonight.

Kids done themselves proud there.

Up the young Reds. Thrown in at the deep end – playing with authority, flair, confidence. Ran into the ground by Villa players several years senior, trying to prove a point. Hoever riddled with cramp summed up the efforts. A valiant attempt in trying circumstances. #LFCdigest

Well played, lads. Up the Reds.

The young lads did themselves proud tonight,A great experience for them ?The score flattered Villa somewhat!The travelling support was absolutely fantastic ? ynwa

Felt like a huge risk from #LFC to throw so many youngsters into senior football with no support tonight. Thankfully, they can take that tighter second half and a relatively respectable scoreline away and so it shouldn't harm anyone too much. Great effort from the kids.

So proud of our kids. Definitely deserved a goal or two for their efforts against a Premier League side. They've done themselves and the club a great service tonight. Some in particular have a great future ahead. Well done also to the traveling Kop, loud & brilliant. #LFC #YNWA

Great experience for the youngsters but should never have been put in that position. Effectively a third team playing in a EFL Cup quarter-final is ridiculous. Should never have come to that.

All of these lads will have learnt a huge ammount and can be proud. Average age 19 away from home vs a Premier League team with an average age of 28. I think Elliott, Chirivella, Hoever perhaps standouts but plenty others did well against such difficult opposition.

From all of us watching over here in Qatar…an accomplished performance from a young, vibrant team brimming with confidence, matched by the unending support we could hear from the away end. Thank you so much for your belief in this team on a night none of them will forget. #YNWA