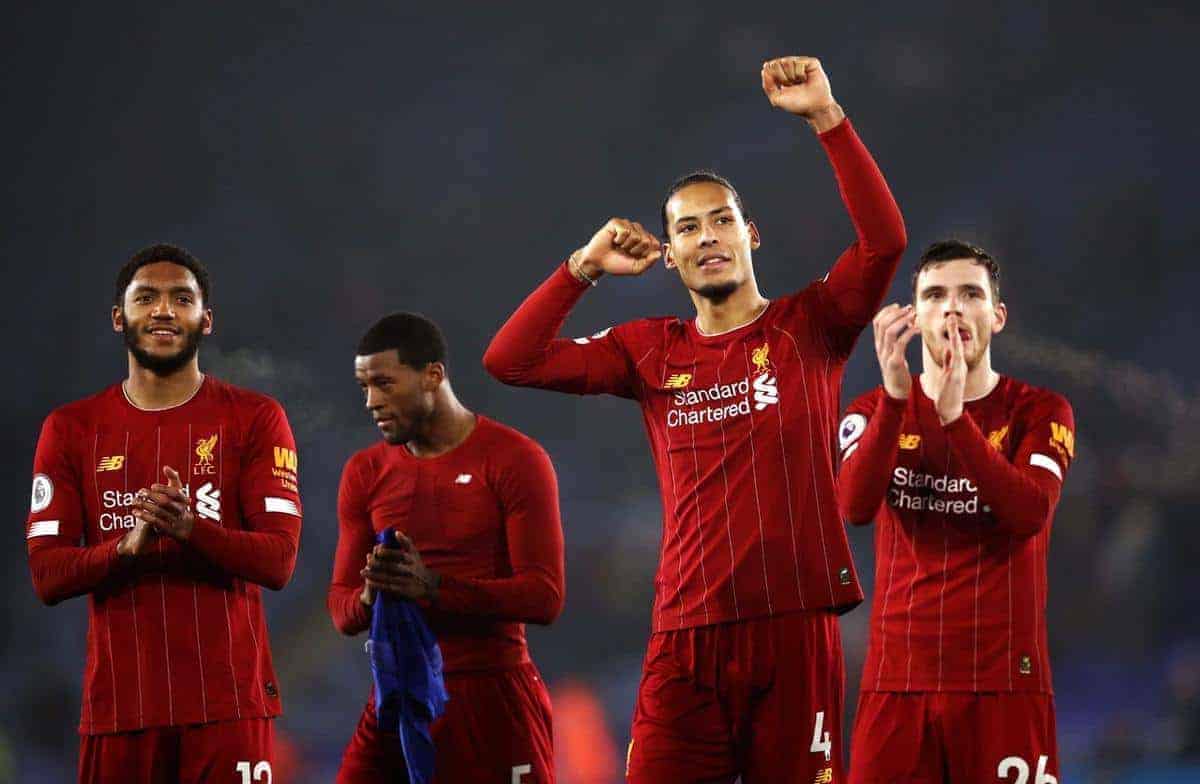 Liverpool turned on the style and hit Leicester for four, and fans were overjoyed with the win and the emphatic performance.

The world champions turned their attention back to their league campaign with a visit to Leicester, where

A flurry of chances came the way of the Reds from the first whistle, but Liverpool had to wait until just after the half-hour mark to take a deserved lead after Roberto Firmino headed home from close range.

Jurgen Klopp‘s side were far and away the dominant side and it was not until James Milner‘s penalty conversion, with his first kick of the game, which ensured it was reflected where it mattered most.

And it saw the dam wall break as Firmino added his second and Trent Alexander-Arnold joined the party late in the piece to see the Reds cap off their 17th league win in emphatic fashion.

Second Trent got on the ball, you knew it was going to be a goal-scoring chance. Key playmaker in our side at 21.

Liverpool open the scoring a totally dominant display so far. Only question is how is it only 1 nil

Firmino has now scored for three games in a row, for the first time since September 2018 (Leicester, Tottenham, PSG).

What a cross from Alexander-Arnold. Glorious delivery.

That might just be Liverpool's best first-half display of the season. Assured, aggressive, totally in control. But bloody hell, have they missed some chances.

The relentless nature of Liverpool makes every game feel like you have switched on after an opposition red card. So much movement, so many options with the ball, so much outnumbering out of opponents with and without the ball.

“Scoreline doesn’t do us justice. Leicester should have been dead and buried.”

Like a passing training drill. Another goal would be nice, tho.

Liverpool, Liverpool are good. Now, again, still. But Liverpool also should have scored more and Leicester are also not bad and I would like more Liverpool goals. Otherwise *chef kiss* as per usual

Played v well, except for finishing. Wasteful by Mané in particular & Salah. Should be 3 or 4 up in 1st half, reminds me of our last game vs Leicester where we were wasteful then Madisson scored from Leicester's only shot on target in the game. Get your shooting boots on lads.

One of the most impressive, controlled performances I've seen from us. Dominant all over the pitch. Only negative is we should be further ahead #LFC #LEILIV

This is the best I’ve seen us play in my life.

This team, honestly. Something else.

Henderson has absorbed Fabinho's qualities and added them to his own ffs the guy is insane.

Joe Gomez is back to where he was pre-Burnley. Naby Keita getting close to what we hoped he would be. And if you don't think Henderson is an outstanding footballer you need to give your head a serious wobble.

Hard to pick a man of the match becuase they have all been so fucking good. Its probably Trent but Gomez, Keita, Henderson and Wijnaldum all great

So many big performances but Trent Alexander-Arnold has been sensational tonight.

Best right back in the world and he's a 21-year-old.

Trent is already that good that he’s surpassed a ‘coming of age’ performance – but this is something else. Finest academy product since Gerrard. #LFC

That was honestly the best individual performance I can remember seeing in years.

This is not an exaggeration or bias — Trent Alexander-Arnold will go down as the best full-back in Premier League history.

Generational talent is an understatement. pic.twitter.com/SJmsGO82oZ

This performance from Trent has been one for the ages. Incredible. What a talent.

Difficult to single out individuals after that, but Trent was ludicrously, outrageously good there. Got to be right in the mix for PFA Player of the Year at this rate.

Overall, a complete performance was lauded as fans were left in awe of their table-topping world champion Reds…

This Liverpool team are a joke, aren’t they? Entire squad was playing two games on the other side of the world last week. Returned and blasted away the league’s in-form side in their own back yard. Trent’s finest ever performance, but it still looks effortless to him. #LFCdigest

Don't tell anyone, but I think Liverpool might be good at football.

That was the performance of a side who know they’re the best in the world. Most complete display of the season, no doubt. One of the best ever under Klopp.

That was the most dominant Liverpool performance I’ve seen in a long time and I include the time we smashed those Catalan pricks 4-0 to get to the Champions League Final. Which we won. Just a sensational team.

“Best performance of the season, bar none. Vardy didn’t get a sniff, clean sheet, smashed it, Bobby with goals. And it goes on and on. What more can you ask for today?

@LFC have now set a new club record of 17 away league games without defeat.

The manner in which Liverpool's brilliance has become normalised is madness. They have won 26 of their last 27 league matches. If that happened on a computer game you'd laugh at how unrealistic it was.

We just keep going. A Boxing Day clean sheet victory for @LFC. 52 points in 18 matches, and 13 points clear at the top of the table. Up the Reds! #leiliv pic.twitter.com/XORJuiaMgM

That was absolutely phenomenal. This team will eventually be remembered as one of the best in Premier League history. They already are for me.