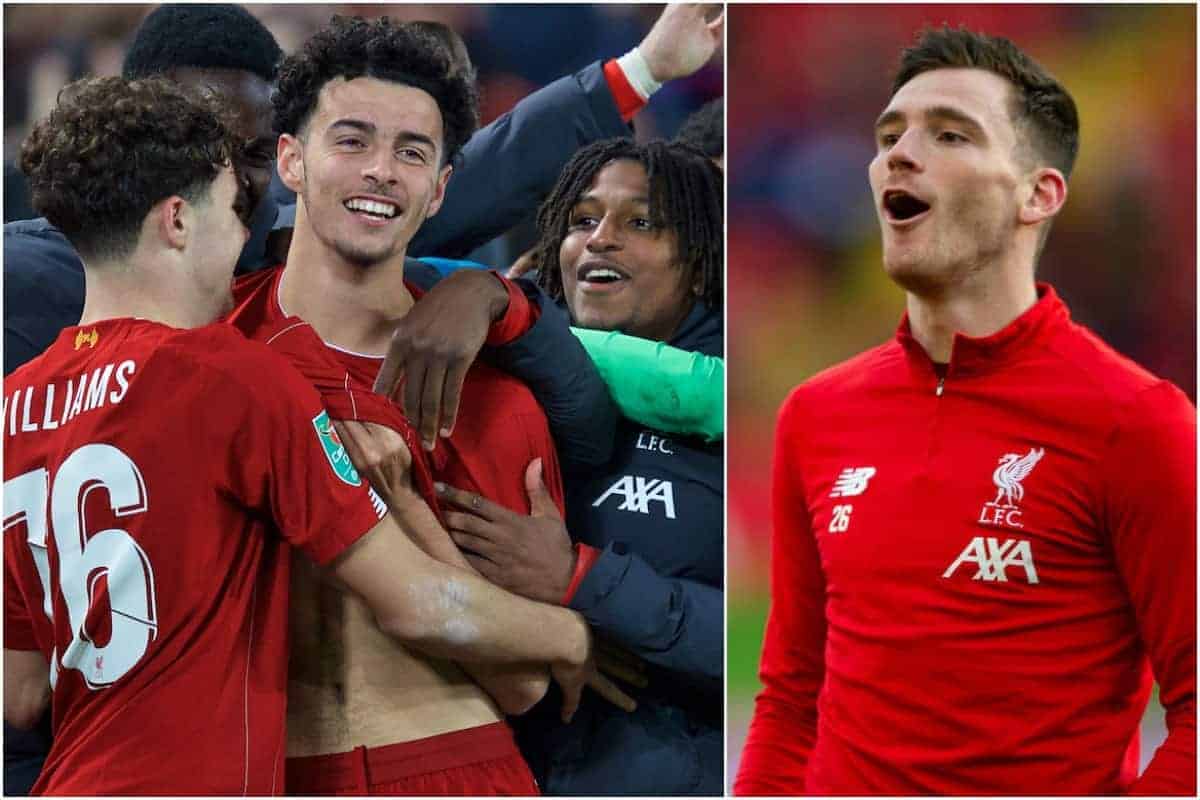 Andy Robertson’s first-hand experience ensures he has full confidence in the club’s youngsters should they get the nod in the FA Cup tie against Shrewsbury.

Liverpool’s season to date has seen the side hit the headlines for their Premier League success and Club World Cup triumph.

It’s been a campaign to savour for all involved, but equally for the club’s youngsters who have earned their right to play in the fourth round of the FA Cup on Sunday.

Jurgen Klopp is renowned for showing faith in the burgeoning talent from the academy, and they have repaid it and then some with a series of confident and match-winning performances in the League and FA Cup.

And Robertson has no doubt the likes of Curtis Jones, Neco Williams, Harvey Elliott and Yasser Larouci are “good enough to play for the club” having not only seen them emerge victorious over the likes of Everton but having also been forced to prepare for league games against “the yellows.”

“If we play 11 v 11, then the yellows, as they are, are causing us all sorts of problems and that’s why we are ready when it comes to Saturday or Sunday in the Premier League because we have faced very good opposition on the Friday in terms of trying stuff,” he explained.

“They are playing against a successful team, but they hold their own. They’re excellent.

“Maybe people didn’t believe us, but when you see the young lads, such as Curtis and Harvey, they are pushing Mo Salah, they are pushing Jordan Henderson in these positions because they are really good and the manager has shown he’s not scared to blood them in big games.

“And if they get a run-out again, it will only help their development,” he added. “They are young, but they add so much to our squad.

“Curtis was on the bench again at Wolves – and so was Neco – these guys are doing so well in training and if they keep the attitude they’ve got and if they keep growing in terms of quality and confidence, then they are going to have big careers.

“If they do play at Shrewsbury, it will be another big step for them.

“Every game we go into, we look to win. People probably raised their eyebrows at the team we put out against Everton but we believe anyone who trains with us is good enough to play for the club.” 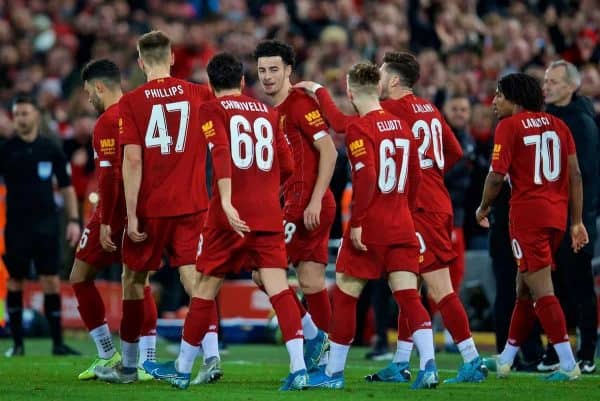 The expectation to win regardless of the personnel or the opposition has trickled down to all levels of the club and the left-back credits the Reds’ Champions League success as a turning point from being a competitor to a winner.

He continued: “We know in that trophy cabinet at Liverpool, we have one in there. Now, what’s important is adding to it – because we want to add more and more trophies at this club with the squad we have and that’s what we aim to do.

“Winning the Champions League was important because now we’re winners and that’s different from just being competitors. We are winners.

“We won it, rightfully so, and that’s maybe why, when things get tight like they did against Wolves, we don’t panic.”